Warning: Use of undefined constant wp_cumulus_widget - assumed 'wp_cumulus_widget' (this will throw an Error in a future version of PHP) in /home/customer/www/whatifpost.com/public_html/wp-content/plugins/wp-cumulus/wp-cumulus.php on line 375
 Yes, some people who like their insurance won’t get to keep it. Here’s why.
≡ Menu

Yes, some people who like their insurance won’t get to keep it. Here’s why. 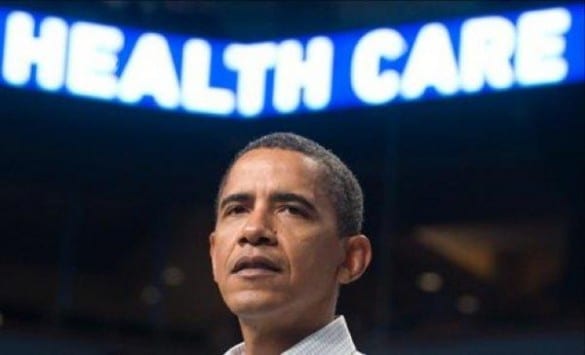 “If you like your current health insurance, you can keep it.” Everyone remembers President Obama making that promise while he stumped for health reform, yet according to a report from NBC News, “millions of Americans are getting or are about to get cancellation letters for their health insurance under Obamacare […] and the Obama administration has known that for at least three years.” People who are losing coverage, says NBC, will be “forced to buy pricier new policies.”

The NBC News report is mostly right on the first part. But it’s the second part– the question of fairness– that has people outraged, and it’s that part that NBC and other media outlets have gotten wrong.

Why “if you like your current plan, you can keep it” is misleading

If you’re currently getting health coverage through an employer, Medicare, Medicaid, or the military, not much changes under Obamacare. The insurance cancellations really only affect people on the individual market (these are people who buy insurance on their own, instead of getting it through an employer), which is a pretty small percentage of Americans: 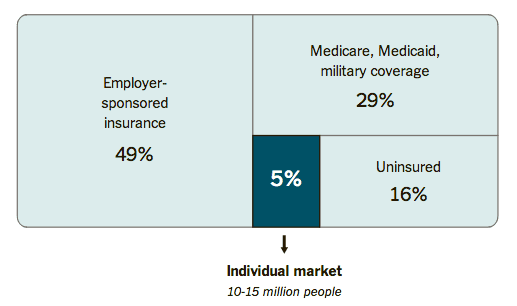 So for at least 95% of the country, President Obama is correct when he says that if you like your insurance you can keep it.

In the individual market things get a little fuzzier. Obamacare says that these plans now have to meet certain minimum standards, and most of the plans currently available don’t meet them (for example, in nearly every state plans can deny coverage or charge more for pre-existing conditions). Still, Obama and the Democrats realized that some people would still want to keep their current plans– even though they didn’t include the new consumer protections– so they grandfathered them in. For policies that existed before the passage of health reform in 2010, these Obamacare rules don’t apply:

So when President Obama says that if you like your insurance you can keep it, this is what he’s talking about: 95% of Americans aren’t really affected, and if you had a plan you liked before Obamacare, it was grandfathered in.

However, that isn’t the whole story…

First, grandfathering only applies to plans that existed before the ACA passed in 2010. Also, even if you have been on the same plan since then, plans lost their grandfathered status if your insurance company made any of these changes to the policy:

The fact is that insurance companies cancel plans or make changes like that all the time. When the Department of Health and Human Services (HSS) released the regulations on grandfathered plans, it estimated that between 40% and 67% of plans would lose their grandfathered status the following year due to plan changes and turnover.

Still, President Obama (and to be fair, everyone else) did know that a large number of plans would be canceled as an indirect result of Obamacare, yet kept repeating the “if you like your insurance, you can keep it” line. The White House deserves some of the heat it’s getting for this.

A closer look at why the new plans are more expensive

However, the part that really has people outraged is the seeming unfairness: not only are people’s policies being canceled, but their new policies could cost more. This is the part that NBC and other outlets have largely gotten wrong.

For one, they’re often ignoring the fact that many people whose policies are being canceled qualify for subsidies making their new plans will much cheaper. As for those who don’t qualify for subsidies, there are really only two reasons why anyone will have to pay higher premiums under Obamacare:

1. If their current coverage sucks

New York Magazine’s Chait has a great explanation of this point:

A great many of the people who are happy with their individual health-insurance plan are happy only because they are unaware of its actual value. This sounds patronizing, but it also happens to be demonstrably true. Even highly educated consumers within this market were frequently snookered by insurance plans that turned out to leave them exposed to surprise costs — they incur a sudden high medical cost and discover their plan does not actually cover them. The fine print is a game of wits between insurer and customer that the insurer always wins. A large share of the people telling us now they’re happy with their individual insurance simply haven’t been exposed to a negative surprise. The handful of reporters who closely followed the individual-insurance market before last week are all watching the eulogies for the lost individual plans and having their brains explode:

Re reports of insurance plans cancelled under Obamacare: 3/4 of ppl who declared bankruptcies due to medical costs in ’07 had “insurance”

To give just one example, 56-year-old Dianne Barrette of Florida has become sort of a poster child for increased premiums under Obamacare. CBS News reports that she recently received a letter “from Blue Cross Blue Shield, informing her that as of January 2014, she would lose her current plan. She pays $54 a month. The new plan she’s being offered would run $591 a month, ten times more than what she currently pays.”

Sounds outrageous, right? But what CBS News failed to mention is that Barrette’s plan was “health insurance” in only the loosest sense of the term. Mediaite’s Tommy Christopher looked into it:

It’s part of a subset of insurance that Consumer Reports calls “junk health insurance” (and which even the company that sells it recommends that customers not rely solely upon) and it pays only $50 towards most of the services it covers. That’s it […]

What if the worst happens, and Dianne needs to be hospitalized due to sudden illness or injury? Well, unless Dianne is suffering complications due to pregnancy, her plan covers nothing. If she’s having complications from pregnancy, it covers fifty bucks.

It’s not just CBS– other networks are doing the same shoddy reporting. NBC News reported on a California woman who was told by her insurer that her current plan, which costs $293 a month was being canceled, and was offered a new plan at $484 a month. That sounds crummy, but how does that price compare to plans she could get on California’s new Obama marketplace? NBC News didn’t check, but The American Prospect’s Paul Waldman and the L.A. Times did, and found that she can actually get a slightly better plan for less than she’s paying now. And that’s without factoring in subsidies– according to the Times, at her current income she’s eligible for a subsidy of over $200 per month, meaning Obamacare will save her $3,000 per year in premiums.

2. If their old low premiums came at the expense of old people, sick people, and women

There are some people with decent insurance whose policies are being canceled, and for whom new comparable policies will in fact be more expensive. These people– mainly young, healthy men who make too much to qualify for subsidies– have taken to America’s op-ed pages to rail against the unfairness of it all. But again, it’s worth looking at why their plans are so cheap.

Here’s how insurance works: Very few of us can afford to pay for a major illness, but it could happen to any of us, so we pool our money together (in the form of premiums)– then if someone gets sick, money from everyone in that pool covers the medical expenses. The cost of premiums depends on the average healthiness of the people involved. If there are more healthy people in the pool, premiums are lower; if the people in the pool are more likely to get sick and have expensive medical bills, premiums go up.

Before Obamacare, plans on the individual market kept the pools healthier (and thus premiums lower) by keeping the old, sick, out… or charging them and women (who might become pregnant, which is expensive) exorbitant rates to get in. So to those with decent coverage before who are complaining that their premiums are going up under Obamacare, know that your premiums were lower precisely because people with pre-existing conditions couldn’t get affordable coverage.

That’s why it bothered us whenever we heard President Obama say that if you like your plan, you can keep it. Not only was it misleading, but the fact that some people wouldn’t keep their old plans was kind of the point.

Next post: A guide to reading and watching Obamacare coverage