Warning: Use of undefined constant wp_cumulus_widget - assumed 'wp_cumulus_widget' (this will throw an Error in a future version of PHP) in /home/customer/www/whatifpost.com/public_html/wp-content/plugins/wp-cumulus/wp-cumulus.php on line 375
 Why the single-payer movement needed Obamacare
≡ Menu

Why the single-payer movement needed Obamacare 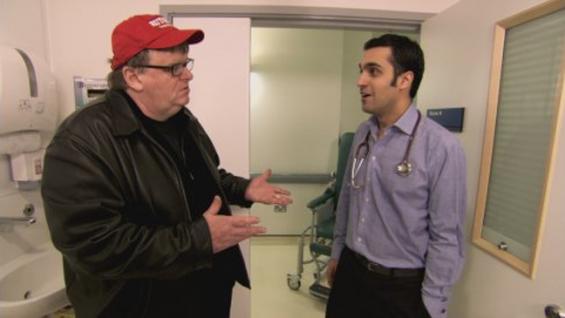 A bunch of people have been asking us what we think of these comments from filmmaker Michael Moore in a recent New York Times op-ed:

Now that the individual mandate is officially here, let me begin with an admission: Obamacare is awful.

That is the dirty little secret many liberals have avoided saying out loud for fear of aiding the president’s enemies, at a time when the ideal of universal health care needed all the support it could get. […]

The Affordable Care Act is a pro-insurance-industry plan implemented by a president who knew in his heart that a single-payer, Medicare-for-all model was the true way to go.

There’s a tendency for some single-payer advocates to judge any health reform solely on whether or not it eliminates the private insurance industry. Since private insurers not only still exist, but actually get more customers under Obamacare, it must be “awful.” Similarly, because insurers could grow under Obamacare, the thinking goes, it must be a step backward for the single-payer movement. Neither is necessarily true.

Obamacare may be a “pro-insurance industry plan” as Moore calls it, but it still eliminates the worst abuses of the insurance industry (lifetime and annual limits, rejects based on pre-existing conditions, and rescissions) while ensuring that millions of people have access to decent, affordable coverage. And interestingly, the specific problems with Obamacare that he mentions could be solved with relatively small fixes.

For many people, the “affordable” part of the Affordable Care Act risks being a cruel joke. The cheapest plan available to a 60-year-old couple making $65,000 a year in Hartford, Conn., will cost $11,800 in annual premiums. And their deductible will be $12,600. If both become seriously ill, they might have to pay almost $25,000 in a single year.

Here he’s picked a worst-case scenario: an older couple, with incomes just above the cutoff for subsidies (four times the poverty line), who both get seriously ill at the same time, in one of the most expensive areas for healthcare in the country. They have two problems: unaffordable premiums and high deductibles.

If their income were slightly lower, say $62,000 instead of $65,000, they could get a silver-level plan for half the price Moore quotes. So the income level where subsidies cut out is probably too low– Congress could fix that by simply making subsidies available up to, say, 500% of the poverty line. Similarly, high deductibles are a problem with some plans, but could be fixed by lowering the out-of-pocket costs plans can charge. Neither fix requires eliminating insurers altogether.

That’s not to say there aren’t plenty of other reasons to support single-payer. A Medicare-for-all plan would likely bring down overall health spending (although as Ezra Klein points out in a recent article, we could get that savings without eliminating insurers, which is what most European countries do). But perhaps more importantly, a single-payer system would be much, much easier to navigate. As anyone who’s tried shopping for coverage on the marketplaces can attest, it can be a difficult process, and not just because of website glitches– buying insurance is inherently confusing. Some people will go uncovered simply because they don’t understand their new options. Compare that to something like Canada’s single payer system where if you get sick, you go to the doctor, show them your health card, and… that’s basically it.

Obamacare could open a path toward single-payer

Moore writes that President Obama “knew in his heart that a single-payer, Medicare-for-all model was the true way to go.” But why then would the president opt for the inferior “pro-insurance industry” plan?

What Moore glosses over is that the chances of a single-payer plan getting through Congress in 2009 were less than slim. Democratic presidents since FDR have have tried and failed to pass a national health plan– the closest they’ve come was Medicare and Medicaid, programs for two groups insurers had little desire to cover anyways: the elderly and the extremely poor (and that was in an era where Congress was much more likely to pass social welfare programs).

Some healthcare activists have realized that if single-payer is going to come to the United States, it’s going to happen gradually: either state-by-state, or by allowing people to buy into a public option. These are winnable battles for single-payer supporters– thanks in large part to Obamacare.

1. How Obamacare helps a state-based strategy

All eyes are on Vermont’s plan for a single-payer system, starting in 2017. If it flies, it will change everything, with many states sure to follow suit by setting up their own versions.

One of the hardest parts about passing single-payer on the state-level is figuring out how to pay for it– while it might be cheaper in the long run, in the short term states have to find money to cover those who had been uninsured under the old system. Obamacare makes that job a lot easier because the federal government is now already paying to cover those folks with subsidies and expanded Medicaid. Starting in 2017, states can apply for waivers to use that Obamacare money for an alternative, state-based system as long as it (1) covers at least as many people; (2) provides at least the same level of coverage; and (3) is not more expensive. A single-payer plan should easily meet all three criteria.

“In blue states, let’s lobby for a public option on the insurance exchange — a health plan run by the state government, rather than a private insurer.”

During the debate leading up to Obamacare, a public option was the top priority for many liberals, who saw it as a potential path towards single-payer. What many perhaps didn’t realize is that a public option simply wouldn’t work without the rest of Obamacare. Under the old system, insurers kept premiums down by excluding people with pre-existing conditions- unless the public option did the same thing, its premiums would have been much higher than private plans’… and unaffordable for most Americans. However, since Obamacare eliminated discrimination based on pre-existing conditions the playing field is now level.

Obamacare isn’t perfect, and sure, single-payer could address many of its flaws. But as The New Republic’s Noam Scheiber puts it:

Flawed as Obamacare is, it has at least one great virtue: laying the groundwork for its own fixing. That’s not bad for such an “awful” piece of legislation.