Warning: Use of undefined constant wp_cumulus_widget - assumed 'wp_cumulus_widget' (this will throw an Error in a future version of PHP) in /home/customer/www/whatifpost.com/public_html/wp-content/plugins/wp-cumulus/wp-cumulus.php on line 375
 Why the 2014 midterms are a big deal for Obamacare
≡ Menu

Why the 2014 midterms are a big deal for Obamacare 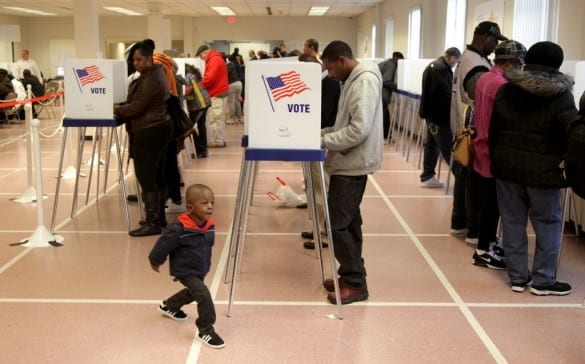 If you read some of this year’s election coverage, you might get the sense that the 2014 elections don’t matter all that much. The current Congress is on track to be the least productive in modern history, and even if the GOP takes control of the Senate, that’s unlikely to change much– they won’t have enough votes to overcome a Democratic filibuster or a Presidential veto.

So it seems many people have tuned out. Usually there’s more and more interest as elections get closer, but a recent WSJ/NBC News poll found that the number of people who expressed interest in this year’s midterm actually declined, from 51% to 50%, between June and October. 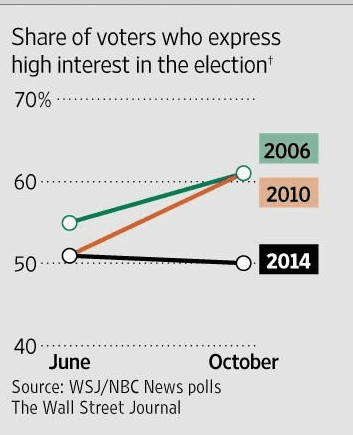 The lack of interest is unfortunate because the 2014 elections could have big consequences for health care, especially at the state level.

Even Kentucky Senator Mitch McConnell, who is poised to become majority leader if Republicans win control of the Senate tomorrow, admits that they won’t have enough votes to repeal Obamacare. They may, however, be able to get bills passed repealing some of the law’s provisions, either through a budgetary process known as “reconciliation,” which avoids the filibuster and only requires a 51-vote majority, or by forcing Democrats to take tough votes on some of the law’s more unpopular features.

Here are a couple provisions Republicans would have their sites on:

There are some other unpopular provisions that a GOP-controlled Senate might try to repeal, like the individual mandate and risk corridors for insurance companies (Republicans have tried to paint that last one as a bailout for insurance companies, but the CBO says they actually save the government money). Republicans know that President Obama would absolutely veto these repeal attempts, since these provisions help make the law function– the point though would be “to force Democrats to take tough votes” according to one GOP strategist.

There’s also the question of judicial confirmations. As Jeffrey Toobin pointed out in a recent New Yorker article, Obamacare recently got some help from President Obama’s appointments to the powerful D.C. Circuit Court. When two conservative judges struck down the subsidies that help people pay for premiums on the federal exchanges, the administration was able to appeal to the full court, which now has a large majority of Democrat-appointed judges. When he took office, Republican-appointed judges held a majority. Appealing to the Supreme Court– which has a majority of Republican-appointed judges– would have been a riskier move.

It would be much harder to get Obama’s judicial nominations through a GOP-controlled Senate writes University of Chicago law professor Geoffrey Stone:

If the Republicans control the Senate, you can be sure that many fewer Obama nominees will be confirmed, and that those who do win confirmation will be much less progressive than the judges this White House has managed to appoint in its first six years. This will have a lasting and important impact on the federal judiciary for decades to come.

Meanwhile, if Democrats keep control of the Senate, it’ll mean more than just the ability to head off repeal votes and confirm judges. The Washington Post reports on a recent study by Harvard social science researchers:

They say if Democrats keep the Senate, they would try to provide more resources for the law, and the political environment would encourage more of the 23 Medicaid expansion hold-out states to opt into the program. And it would give Democrats’ 2016 presidential candidates more confidence to push for expanded coverage.

The real action on healthcare this year is at the state level, where in at least six states, Medicaid programs could be expanded as a result of 2014’s gubernatorial races.

Georgia, Kansas, Maine, Wisconsin, and Alaska all have Republican governors who opposed Medicaid expansion and are now in extremely tight races against opponents who want to expand the program. In Florida, Republican governor Rick Scott initially opposed expansion, then changed his mind and now supports expansion for the first three years, when the federal government will pay 100% of the cost (after 2016, the feds’ share will gradually decrease to 90%). However, Scott also made it clear that expansion wasn’t one of his legislative priorities, and when the Republican-controlled Florida legislature blocked it, he didn’t fight them. His opponent, Charlie Crist (who also once opposed the Medicaid expansion) is expected to push harder for it if he wins.

In Pennsylvania, Republican Governor Tom Corbett. Corbett only recently got federal approval for a plan to expand Medicaid in Pennsylvania that would charge premiums for some recipients and cut back some services for existing Medicaid recipients. His challenger, Tom Wolf, said he’d pursue expansion without these restrictions.

In other states, elections to determine control of the legislature will be important. For example, in Arkansas, which did expand Medicaid under a Democratic governor, it looks like the Republican candidate will win the governors’ election. If Democrats don’t manage to take control of the state House, Arkansas Republicans might try to undo the states’ Medicaid expansion, which will be up for renewal soon. And many of the states we mentioned as having important governors races also have Republican legislatures– any Democratic pickups would make a new Democratic governor’s job of negotiating a Medicaid expansion much easier.

Far from being a boring election, these state races will decide whether millions of Americans will get health coverage. And since so many people are tuned out, relatively small increases in turnout for one side, could make a huge difference. So make sure to vote! If you’re unsure of your polling location or want to see sample ballot, you can find that info at gettothepolls.com.

Next post: The 2014 election was bad for Democrats, but there was *some* good news for healthcare

Previous post: Calm down, part 2: Why we should be *encouraging* U.S. healthcare workers to help fight Ebola in west Africa