Warning: Use of undefined constant wp_cumulus_widget - assumed 'wp_cumulus_widget' (this will throw an Error in a future version of PHP) in /home/customer/www/whatifpost.com/public_html/wp-content/plugins/wp-cumulus/wp-cumulus.php on line 375
 Why climate change is a health issue
≡ Menu

Why climate change is a health issue 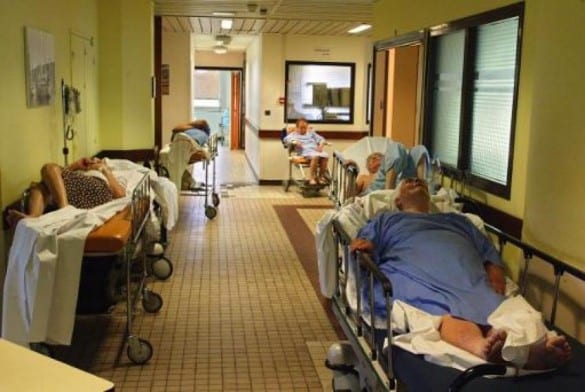 Patients being treated during the 2003 heat wave in France.

Every major issue in the news has its own stock image: for the VA scandal it was injured veterans; nearly every story about the obesity crisis comes with a photo of a bulging gut with the head just out of frame, and during the financial meltdown it was a great year for whoever sells photos of Wall Street traders looking upset. For climate change, the iconic image has long been a polar-bear stuck on a piece of ice. It says a lot about how we tend to think of climate change as something far away– maybe one day it’ll be a problem, but for now at least, only polar bears and penguins have to worry.

But in recent years, we’ve been seeing more and more evidence that climate change is causing trouble today. So when the EPA announced its plan to regulate carbon pollution from existing power plants for the first time ever, the news stories didn’t come with photos of polar bears– instead the photos were of smokestacks spewing nasty gases into the atmosphere. And for an even more accurate picture of climate change, we should also see kids with asthma inhalers, ticks and mosquitos carrying diseases, and ER rooms packed with people suffering from heat stroke. Because more than anything else, climate change is a healthcare problem.

How climate change is affecting our health right now

Heat waves: Rising average temperatures mean more days with extreme high temperatures. Chicago is looking at a 25% increase in heat wave days by the end of the century, while Los Angeles can expect a 400% to 800% increase. Here’s how many days over 95°F that southeastern states can expect each year as the world warms: 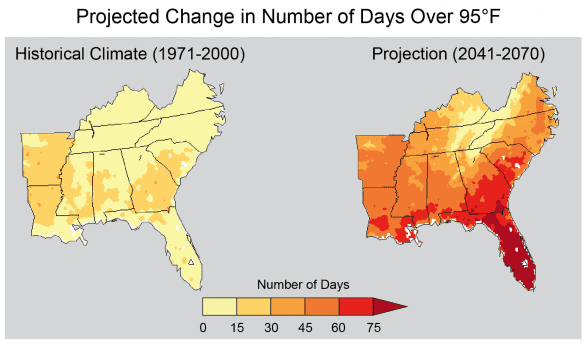 Heat waves increase the risk of hyperthermia (also called “heat stroke”), which can be deadly, particularly for young children, the elderly, and people with pre-existing illness. In 2003, a heat-wave lasting eight weeks resulted in an estimated 70,000 deaths– the deadliest weather-related event ever in a developed part of the world. And from 1999 through 2009, extreme heat exposure caused more than 7,800 deaths in the United States. As Brian Stone of the Urban Climate Lab at Georgia Institute of Technology told NPR:

It’s a large threat. We know today and historically that heat and heat waves account for many more deaths every year in the United States than do tornadoes and hurricanes, flooding events. Actually, all of those events combined don’t result in as many deaths each year than just heat waves do.

More wildfires: From the most recent Intergovernmental Panel on Climate Change (IPCC) report:

Heat also acts on human health through its effects, in conjunction with low rainfall, on fire risk. In Australia in 2009, record high temperatures, combined with long-term drought, caused fires of unprecedented intensity and 173 deaths from burns and injury. Smoke from forest fires has been linked elsewhere with increased mortality and morbidity.

More smog: Higher temperatures accelerate the formation of ground-level ozone, which is the main ingredient in smog. Smog is bad news for your lungs— it can inflame and damage the respiratory system, reduce lung function, and aggravate chronic lung diseases, like emphysema and bronchitis. It may also reduce your immune system’s ability to fight off bacterial diseases in the respiratory system. Even modest increases in smog can cause asthma in children (whose lungs are still developing), which is the third leading cause of their hospitalizations. And according to a White House report it hits some communities particularly hard: African-American children are twice as likely to be hospitalized for asthma as whites and Latino children are 40 percent more likely to die from asthma than white children. UPDATE: According to a new study, climate change could also increase the number of days that stagnant, polluted air hangs over cities.

Spread of disease and allergens:

[Some of this info might sound familiar to long-time readers. Also, for more info on global warming-related gloom and doom check out this article in the San Francisco Chronicle and the EPA’s website.]

Health effects in the long-term

This will depend on how hot it gets. If we hold global temperatures to a 2ºC increase over pre-industrial levels (which is the target that most countries in the world have agreed on), we can still expect more famines, as wheat, corn, and rice yields drop in tropical parts of the world. The IPCC report cites studies projecting a reduction in available calories in some countries, leading to 25 million more underweight children, an increase in severe stunting in Africa and South Asia, and more undernutrition-related child deaths. The report also looks at the mental health effects of an increasing number of natural disasters and droughts, and concludes there will be more incidence of chronic psychological distress and suicide.

However, 2ºC is probably the best case scenario. Without a massive immediate reduction in global carbon emissions (which is looking less and less likely) we’re currently on track to blow past the 2°C limit by mid-century, and hit 4-5°C by its end. Four or five degrees might not sound like a lot, so to put it in perspective: during the last ice age, when the northeast U.S and much of the midwest was covered in a half-mile thick sheet of ice, the average global temperature was only about 4.5°C cooler than it is now. 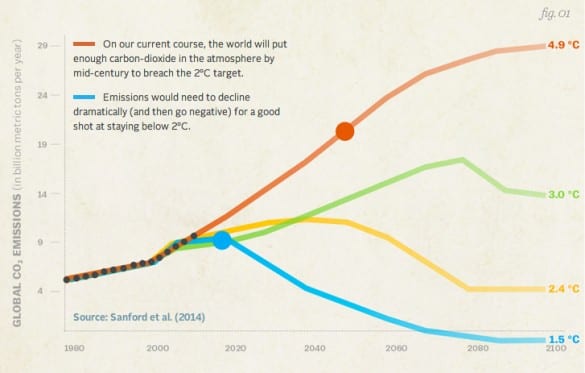 So what happens when it gets 4-5°C warmer? Well, we know that food production in some parts of the world will be a major problem, because huge tracts of farmland in Bangladesh, Vietnam, Egypt and Africa will be underwater. But we don’t know exactly how bad things will get, because we don’t have a great model for how all the potential impacts will interact with each other at such high temperatures. The website Vox explains:

Many climate models assume that the impacts of 4°C of warming will be twice as bad as those of 2°C. But as a recent World Bank report argued, that might be wrong. Impacts may interact with each other in unpredictable ways. Current agriculture models, for instance, don’t have a good sense for what will happen to crops if increased heat waves, droughts, new pests and diseases, and other changes all start combining together. ”

[G]iven that uncertainty remains about the full nature and scale of impacts,” the World Bank report said, “there is also no certainty that adaptation to a 4°C world is possible.” Its conclusion was blunt: “The projected 4°C warming simply must not be allowed to occur.”

The EPA’s plan won’t halt climate change on its own, but it’s a start from one of the world’s biggest polluting countries. We’ll look at how it works in our next post.

Next post: The EPA’s plan to combat climate change and what it means for America’s health

Previous post: What’s going on with the VA? Part 2: The disability claim backlog