Warning: Use of undefined constant wp_cumulus_widget - assumed 'wp_cumulus_widget' (this will throw an Error in a future version of PHP) in /home/customer/www/whatifpost.com/public_html/wp-content/plugins/wp-cumulus/wp-cumulus.php on line 375
 Why aren’t Democrats more excited about health care reform?
≡ Menu 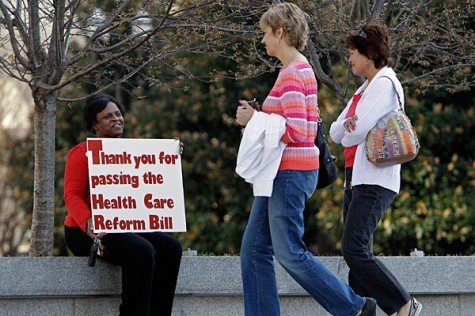 For some Dems, it all goes back to the public option.  During the health care debate, progressive leaders like Howard Dean were telling us that a bill without a public option or Medicare buy-in was “not worth passing” and that it “would do more harm than good to the future of America.”  Many liberals saw the public option as the most important part of the bill, and they couldn’t understand why President Obama wasn’t pushing harder for it.  To them, a bill without a public option was just a massive giveaway to the insurance industry (Dean called it “a bigger bailout than AIG”), that Democrats rushed to pass just so they could claim some kind of victory.

Let’s look at each part of these Democrats’ interpretation.

Claim #1: The bill wasn’t worth passing without a public option
At a rally in New York City last October, after the Senate Finance Committee announced that it was dropping the public option from its version of the bill, President Obama reminded the audience that there was more to health reform than just the public option:

“Let me say this ‘cause somebody just brought up something. Among Democrats and progressives, there are a whole set of views about how we should do health care. But understand that the bill you least like in Congress right now– the one you least like of the five that are out there– would provide 29 million Americans health care.  Twenty nine million Americans who don’t have it right now would get it. The bill you least like would prevent insurance companies from barring you from getting health insurance because of pre-existing conditions. Whatever the bill you least like would set up an exchange so that people right now who are having to try to bargain for health insurance on their own are suddenly part of a pool of millions that forces insurance companies to compete for their business and give them better deals and lower rates.

So… there are gonna be some disagreements and details to work out. But to the Democrats- I want to say to you Democrats, let’s make sure that we keep our eye on the prize.”

Claim #2: The Public Option was the most important part of the bill
Ok, so picture a scenario in which Congress:

The millions of people who can’t afford to buy insurance on their own would still be out of luck. Meanwhile, the public option would either have to deny coverage to people with pre-existing conditions or attract a sicker pool of applicants (people who couldn’t get coverage anywhere else) driving the cost of premiums much higher than private insurance.  The public option just doesn’t work without the other reforms in the new law.

Sure, a public option would have been great– mostly because it would save a lot of money.  (Remember that it’s the government who would save– thanks to subsidies, most families would pay the same price for private or public insurance.)  According to the CBO it would have had much lower administrative costs than private insurance.  If it was allowed to pay doctors and hospitals rates based on Medicare (say, Medicare rates plus 5% or 10%) it would have saved even more money.

But we’d argue that the most important part of the health reform is making sure as many people as possible get health care when they need it, which means some type of decent coverage.  The public option was a great way to control the government’s costs, but it doesn’t affect how many people will be covered.  With or without the public option, an estimated 32 million more Americans will still have health coverage as a result of reform.

Claim #3: We could have passed a public option if Obama had pushed harder for it
Obama probably could have done more to push for a public option, but regardless, in the end the math doesn’t seem to add up.  In the original votes on health care, the House barely managed to pass a weak public option, but they couldn’t get 60 Senators on board.  It was clear that Joe Lieberman (and probably a handful of other Democrats) was going to vote against the public option, no matter what.

Later, after the election of Senator Scott Brown in Massachusetts, the Democrats had to use a process called reconciliation, which only requires 50 votes.  But the public option now had issues in the House.  With a block of Democrats threatening to vote against the health reform bill over abortion rules, House leaders scrambled to bring aboard other Democrats who voted against the bill the first time through.  Most of these were conservative New Democrats and Blue Dogs who had opposed the public option.

It’s possible that some last minute arm-twisting over the public option may have convinced some Representatives, but again, passage of any bill was in serious doubt until the last minute.  More pressure could just as easily have killed the whole thing.

Claim #4: The bill is just a give away to the insurance industry
We’ll let the Washington Post’s Ezra Klein handle this one:

You know, I keep hearing what a gift the health-care law is to the insurance industry, and then I read that they’re donating tens of millions of dollars to groups trying to elect candidates pledging to repeal the legislation, and then millions and millions more to individual Republican legislators who’ve pledged to repeal the law. It’s all very confusing.

It’s true that the insurance industry will benefit from the 15 million new customers (the rest of the newly insured will be covered under Medicaid). But they also face strict new rules preventing them from denying coverage or charging too much, all of which they would like to weaken as much as possible.

Conclusion
A number of Democrats have complained that the bill doesn’t go far enough– and they’re right, there’s still plenty of work to do on health care. However, in their criticism they tend to gloss over how far the new law does go.  Again, here’s President Obama:

This has been a battle that has lasted since Teddy Roosevelt.  The basic principle that part of our social contract is you don’t go bankrupt if you get sick.  That families shouldn’t have to worry if their children need help.  That we are looking after each other enough to make sure that everybody has health care in this country.

The battle isn’t over– but the new law brings us closer than we’ve ever been.

Next post: What do the midterm results mean for health reform?

Previous post: Why are Republicans so upset by health reform?