Warning: Use of undefined constant wp_cumulus_widget - assumed 'wp_cumulus_widget' (this will throw an Error in a future version of PHP) in /home/customer/www/whatifpost.com/public_html/wp-content/plugins/wp-cumulus/wp-cumulus.php on line 375
 Who’s really responsible for the deficit?
≡ Menu

Who’s really responsible for the deficit?

The Washington Post has a neat interactive feature showing that some of the politicians who are most actively complaining about the deficit voted for the same policies that pushed us into the red.

We do have one criticism though– the chart includes the 2009 stimulus bill in its list of budget busters, but not the 2003 Medicare prescription drug plan.

The feature leaves out some important context for understanding the stimulus:  that the state of the economy is just as important to the deficit as spending and tax cuts. When the economy is doing poorly, GDP shrinks (economists measure debt as percentage of GDP) and people are making less money or laid off, meaning the government has less money coming in from taxes. 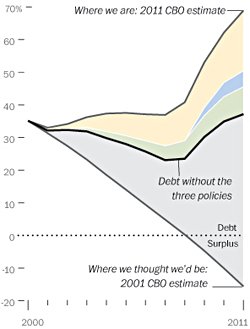 Meanwhile, when the CBO scored the Medicare prescription drug program, they found that it would add $400 billion to the deficit in the first ten years and trillions more after that. Why did the Washington Post leave out this key vote?

Probably because if you remove the stimulus and add the Medicare vote, you’re left with policies pushed mainly by Republicans, with the help of a handful of Democrats (the exception being the two wars, which both parties have voted to continue funding). Journalists don’t want to appear biased, so you get lines like:

“Republicans made the contradictory promises that cutting taxes would lead to higher revenues and would force lower spending,” House Minority Leader Steny Hoyer shot back in a speech later the same month. “They did neither.”

The reality falls somewhere in between.

The reality does “fall somewhere in between,” but where in between is important. And attempting to spread the blame evenly between the two parties doesn’t make a lot of sense here.

Next post: The truth about health reform in Massachusetts