Warning: Use of undefined constant wp_cumulus_widget - assumed 'wp_cumulus_widget' (this will throw an Error in a future version of PHP) in /home/customer/www/whatifpost.com/public_html/wp-content/plugins/wp-cumulus/wp-cumulus.php on line 375
 What’s next for the GOP on healthcare? They basically have two choices.
≡ Menu

What’s next for the GOP on healthcare? They basically have two choices. 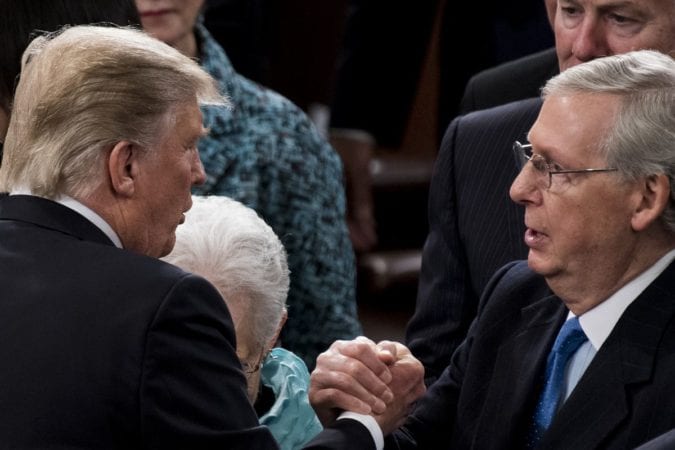 If we’ve learned one thing over the past few months, it’s to stop making predictions about what Congress will do next. Like the killer in a horror movie, every time we thought Obamacare repeal bill was dead– when Paul Ryan gave up on a House vote back in March; when at least three Senators announced their opposition to every public version of the bill– it always somehow managed to come crawling back. And when it looked like a version might actually pass last month, John McCain swooped in at the last minute to put the final stake in its heart.

Or so we thought. We’ve been hearing rumblings that some Republican senators are pushing for another repeal vote. However, others– even more shockingly– are pushing for bipartisan bill to help fix the ACA. Let’s take a closer (but prediction free) look at the two options.

Option 1: Give up on repeal (at least for now) and work with Democrats to fix some of the problems with Obamacare

We know, this one sounded crazy to us too… but it might actually happen.

Shortly after the failed health vote, McConnell announced that in September the Senate will move on to tax reform, and the chair of the powerful Finance Committee, Orrin Hatch, said that Republicans are too divided for another health care vote. He told Politico, “We’re not going back to health care. We’re in tax now. As far as I’m concerned, they shot their wad on health care and that’s the way it is.”

However, Congressional Republicans can’t put healthcare completely behind them, because, in an attempt to force another repeal vote, President Trump has been threatening to sabotage the ACA with tweets like these:

If a new HealthCare Bill is not approved quickly, BAILOUTS for Insurance Companies and BAILOUTS for Members of Congress will end very soon!

If ObamaCare is hurting people, & it is, why shouldn't it hurt the insurance companies & why should Congress not be paying what public pays?

When Trump refers to “BAILOUTS” what he’s actually talking about are“cost-sharing reductions” (CSR’s), a provision in the ACA meant to help low and middle income families. The CSR provision says that if you make less than 200% of the poverty line (currently $29,700 for an individual), insurers have to lower your out-of-pocket costs if you buy a silver plan. The savings can be substantial– CSR’s can bring the deductible on a silver plan from $2,500 down to $500 or less– and about 7.1 million of the 12.2 million people who signed up for ACA plans this year are eligible for this extra help. To pay for the lower deductibles, the government sends payments directly to insurers every month.

Back in 2014, when Barack Obama was president, House Republicans sued the White House to block these subsidies, arguing that Congress had never appropriated the money to send to insurers. When Trump took office, the House and the White House both agreed to put the lawsuit on hold, but as it stands now, the Trump administration can decide to stop paying the subsidies to insurers at any time.

So that’s what Trump is threatening when he tweets about ending “insurance bailouts.” Now, under the law, insurers still have to offer CSR’s even if the Trump administration doesn’t pay them for it. To keep from going bankrupt, they’d either have to (1) raise premiums to make up for that $7 billion in lost CSR’s or (2) just drop out of the market altogether. Since most people on the exchanges receive subsidies that shield them from premium increases, the federal government will pick up most of the tab for those higher premiums– and it will cost much more than it pays for CSR’s. According to a CBO estimate released yesterday, if the Trump administration ends payments for CSR’s, the effect would be:

As Larry Levitt, vice president of the nonpartisan Kaiser Family Foundation put it:

Ending CSR payments to insurers seems like a pretty clear case of cutting off your nose to spite your face.

There’s an easy way to take the knife out of Trump’s hand though: Congress could simply appropriate the money. And, to their credit, some key Congressional Republicans are beginning to work with Democrats on a bill to do just that.

Lamar Alexander (R-TN) chair of the Senate Committee on Health, Education, Labor and Patty Murray, the ranking Democrat, announced that their committee will begin holding health care hearings in September to look at ways to shore up the Obamacare marketplaces. In the announcement, Alexander admitted, “Without payment of these cost-sharing reductions, Americans will be hurt.”

Alexander and Murray aren’t the only ones working on a bipartisan fix. In the House, a group calling itself the “Problem Solver’s Caucus” has released a plan that combines some Republican priorities with some Democrat ones– and honestly, it’s not a bad list. The five policies they’re proposing are:

Even the chair of the House Freedom Caucus, which represents the tea party wing of the party, has shown a willingness to expand the CSR payments, and has reportedly entered talks with a top Republican moderate to that end.

Honestly, we can’t remember the last time there was so much productive bipartisan cooperation on healthcare… so of course Trump is pushing in another direction.

Option 2: Yet another repeal vote

Earlier this month, Trump seemed like he might be backing off somewhat. However, when McConnell told an audience in Kentucky last week that the president “had excessive expectations about how quickly things happen in the democratic process,” Trump renewed his calls for an Obamacare repeal vote, and personally targeted McConnell:

Senator Mitch McConnell said I had "excessive expectations," but I don't think so. After 7 years of hearing Repeal & Replace, why not done?

He also retweeted this link from FOX & Friends:

Trump fires new warning shot at McConnell, leaves door open on whether he should step down https://t.co/tJIRc0usWl

Trump’s not the only one pushing for another full repeal vote this year. A group of Republican senators has quietly been trying to build support for the one bill the Senate still hasn’t voted on: a last-minute proposal from Sen.’s Bill Cassidy (R-LA) and Lindsey Graham (R-CA).

Cassidy-Graham: Their bill would eliminate the ACA’s insurance subsidies and Medicaid expansion, and send some (but not all) of that money straight to the states as a block grant. Supporters of the Cassidy-Graham bill say that it allows states that like Obamacare to keep it, while giving states that don’t like it the flexibility to try something else. That’s not really how it works though.

For starters, states would receive less money: in 2020, funding would be 16% less than what they would receive for the Medicaid expansion and marketplace subsidies under the ACA. The block grant is then set to grow by only 2% annually– well below the rate of inflation– so by 2026 they’d be getting 34% less. These cuts disproportionately affect states that chose to expand Medicaid, since the bill takes the funding those 30 states currently receive and divides it up among all 50 states. After 2026, it gets worse no matter what state you live in, because the Cassidy-Graham bill would eliminate the funding altogether.

So just to recap– it (1) converts Obamacare to a block grants; (2) reduces the amount of the block grant over ten years; then (3) eliminates the block grant altogether. In other words, this bill repeals Obamacare without a replacement– it just takes eight years to do it.

The bill does keep one part of Obamacare though: the requirement that plans have to offer coverage to everyone, regardless of pre-existing conditions. While that sounds like a good thing, it could actually destroy the individual market in many states. Without the ACA’s individual mandate and subsidies that bring healthy people into the risk pool, only the sickest people would sign up, creating insurer death spirals.

Cassidy-Graham might be the worst of all the options the Senate has considered so far, but its authors are working hard to attract key “moderates.” Dean Heller of Nevada has already endorsed it; John McCain, who helped kill “skinny repeal” last month, is close friends with Graham; and Susan Collins, another vote against skinny repeal, once co-sponsored a bill with Cassidy that contains some of the same elements. They’re also trying to build support among Republican governors who were instrumental behind the scenes in blocking the GOP’s other repeal bills.

On the other hand, in his dramatic return to the Senate last month, McCain called for bipartisanship:

“Let’s trust each other. Let’s return to regular order. We’ve been spinning our wheels on too many important issues because we keep trying to find a way to win without help from across the aisle.”

We hope he stands by that– and that his colleagues listen to him. But like we said at the top: we’re not making predictions.

Previous post: A recap of the completely insane final days of the Senate health bill