Warning: Use of undefined constant wp_cumulus_widget - assumed 'wp_cumulus_widget' (this will throw an Error in a future version of PHP) in /home/customer/www/whatifpost.com/public_html/wp-content/plugins/wp-cumulus/wp-cumulus.php on line 375
 What to expect when the Supreme Court rules on health care
≡ Menu

What to expect when the Supreme Court rules on health care 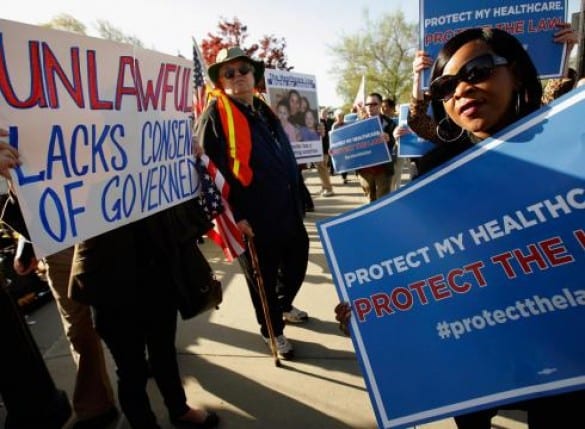 With the Supreme Court health care decision expected any day now, there’s been plenty of speculation in the media about what to expect after the ruling. Here’s some of the best coverage we’ve seen.

What to expect from politicians

First up, the USA Today has a great article on what would happen next in each of the four possible outcomes to the health law case. (Which are: 1. the whole law stands, 2. just the individual mandate is struck, 3. the mandate and related insurance provisions are struck, or 4. they kill the whole law.) So for example, if the justices uphold the entire thing:

A decision upholding the law would unleash a series of political, legislative and legal forces.

•Republicans in Congress plan to resume legislative attacks. The House of Representatives has voted to weaken or wipe out the law more than a dozen times, including this month’s vote to repeal a tax on medical devices.

•Opponents would be galvanized for the fall elections. For Obama, that could mean a more difficult path to re-election, despite his victory in court.

•Lawsuits pending at lower courts will move forward, and new ones could be filed to test other aspects of the law, ranging from its Independent Payment Advisory Board — charged with finding savings in Medicare — to its requirement that most insurance plans pay for contraception coverage.

The pace of litigation could increase as more regulations are issued, because “there’s going to be winners and losers all over the place,” says Bradley Joondeph, a law professor at Santa Clara University who tracks health care litigation.

Given that upheaval, state governments would face a choice: How fast should they move to implement the law?

What to expect from voters

Meanwhile, the website Politico looks at how voters might react if the Supreme Court tosses the whole law. One of their writers, Brett Norman, summarizes three possible scenarios:

1. Whiplash – what do you mean we aren’t covering people with pre-existing conditions?

2. Sayonara – who wanted that incomprehensible big government law when we could let the market fix everything?

The New York Times reports on the group with the most at stake in the health care ruling: those who are already ill.

With the law’s fate uncertain, participants in the [pre-existing condition insurance] plan are worried, like Maryann Kaine, 52, a music store owner in Fredricksburg, Va., who signed up for the program after she was shut out of her family’s policy because she had had surgery on her back.

“I can’t imagine that they’ll just dump all of us back out into the world of no coverage,” she said.

Kaiser Health News’s Julie Appleby looks at what’s at stake for women if the law is overturned:

“Starting in 2014, the law bars insurance practices such as charging women higher premiums than men, or denying coverage for pre-existing conditions that could include pregnancy, a Caesarean-section birth or a sexual or a domestic violence assault.

Even excluding maternity coverage, the National Women’s Law Center found that nearly one-third of the most commonly sold insurance plans charged women aged 25 to 40 at least 30 percent more than men for the same coverage.”

“If the Supreme Court strikes down the health law, 49 million Medicare beneficiaries could lose a variety of benefits that have already kicked in. They include:

That’s it for now, but we’ll be updating this list as we find more good stuff, so be sure to check back. And of course, once the Supreme Court makes its ruling we’ll be looking at exactly what it means for health reform, so look for that too!

UPDATE: Well that was fast. The New Republic’s Jonathan Cohn has a great post gaming out what would happen if the Supreme Court struck the mandate but left the other insurance reforms.

New York Magazine’s Jonathan Chait reminds us that even if the mandate is struck down, “the vast majority of the bill is likely to stay in place:”

“Striking down the mandate would be a huge deal legally, because it would signal the Court is prepared to resume its Gilded Age function as a kind of right-wing GOP super-legislature, wantonly tossing out laws that offend laissez-faire orthodoxy. It would be, in addition to a travesty of justice, a tragedy, depriving millions of Americans access to health insurance. I want to be clear about this: If the Court strikes down the mandate, I will lose my sh–. But striking the mandate would not end the law, or even most of the law.”

And in an LA Times op-ed, Theda Skocpol, a professor at Harvard University, and Lawrence R. Jacobs, a professor at the University of Minnesota, point out that the mandate is far from the most important part of the health law.

Next post: The Supreme Court upholds Obamacare! Here’s why they did