Warning: Use of undefined constant wp_cumulus_widget - assumed 'wp_cumulus_widget' (this will throw an Error in a future version of PHP) in /home/customer/www/whatifpost.com/public_html/wp-content/plugins/wp-cumulus/wp-cumulus.php on line 375
 What Steven Brill and 60 Minutes got wrong about Obamacare
≡ Menu

What Steven Brill and 60 Minutes got wrong about Obamacare 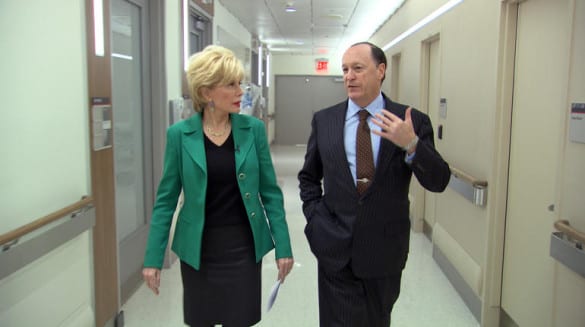 If you asked us to name the best article on health care we’ve read, near the top of the list would be Steven Brill’s 2013 Time Magazine cover story, “Bitter Pill: Why Medical Bills are Killing Us.” It’s a fascinating (and at 36 pages, thorough) look at a topic that affects all of us: America’s ridiculously high medical costs.

Brill’s follow-up articles were also excellent. His “Hate Obama, Love Obamacare,” published in January of 2014, was one of the best assessments of Obamacare’s successes and shortcomings in providing access to care that we’ve seen; and “Obama’s Trauma Team” was an interesting look at how the healthcare.gov website was fixed so quickly after its disastrous launch.

We expected his new book, America’s Bitter Pill, would be equally great since it combines that previous work with new behind-the-scenes reporting on the passage and launch of the Affordable Care Act. The result, however, is less than the sum of its parts, and one of the book’s main assertions– that there’s almost nothing in Obamacare to control healthcare costs– is wrong.

Unfortunately that was the part of the book that 60 Minutes focused on in a recent segment featuring Brill. The result is a trainwreck of misinformation.

There are plenty of cost control provisions in the ACA

The segment begins with a brief introduction from reporter Lesley Stahl, before cutting to Brill, who says this:

STEVEN BRILL: Good news: More people are gonna get health care. Bad news: We have no way in the world that we’re gonna be able to pay for it.”

We’re about a minute into the piece and it’s already demonstrably wrong. Here’s New York Magazine’s Jonathan Chait’s response to a conservative critic of Obamacare, who made a similar claim– that Obamacare is blowing a hole in the federal budget:

CBO originally estimated that Obamacare would reduce the deficit. It correspondingly estimated for the next several years that repealing the law would increase the deficit. CBO stopped issuing cost estimates of the overall law. It did, however, report that its estimate of the law’s gross costs — the spending on coverage — has been falling, rather than rising. Indeed, the federal government is now projected to spend less on health care than it was projected to spend before Obamacare was passed: 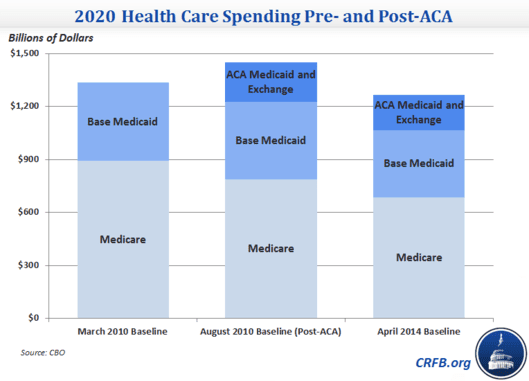 Brill next points out that as a result of various deals the White House made with the healthcare industry:

Here he’s absolutely correct. As Brill reports in his book, past efforts to reform the healthcare system were killed by the drug, hospital, and insurance lobbies; to make sure that didn’t happen this time around, the White House sat down with representatives of each industry to negotiate how much cost control they’d accept (knowing that they stood to make a hefty profit thanks to the law’s expansion of coverage to millions more Americans). Ideas that would save more than the agreed upon amount, or that the industries totally opposed– like importing drugs from Canada, or caps on hospital profits– were left on the table.

However, Brill immediately takes this too far:

STAHL: So all the cost controlling side of this just went by the wayside?

It’s fine for him to point out that a bunch of good ideas for controlling costs didn’t make it into the ACA, but as Forbes’ Dan Diamond points out, that doesn’t mean the new law does nothing to control costs:

If Brill studied the legislation, he’d know: The law is a veritable smorgasbord of cost-control ideas.

“There are a number of features embedded in the ACA intended to control cost,” Martin Gaynor told me on Sunday night. Gaynor’s an economics professor at Carnegie Mellon who specializes in health care, and last year he served as Director of the FTC’s Bureau of Economics. (He’s also a fan of Brill’s reporting — just not on the cost-control argument.)

For instance, the health law has encouraged hundreds of hospitals to create accountable care organizations and participate in bundled payment pilots, which are two kinds of reforms designed to make hospitals and doctors more responsible to deliver high-quality care. They’re not all successful, but they’re helping federal health officials try and figure out what actually works to control cost rather than insist the entire industry adopt untested models.

Most of these ideas are meant to move the health care industry away from fee-for-service payments (in which providers get paid for every procedure) toward a system where providers would get paid a set amount per patient or per illness, with bonuses for quality. Peter Orszag, who worked on health reform as President Obama’s director of the Office of Budget and Management, points out that this would reduce costs in pretty much the same way as Brill’s suggestion to have large health systems provide their own insurance: both methods would remove the incentive to do expensive tests and procedures that don’t lead to better outcomes.

The middle of the segment is devoted to the story of Sean Recchi, an Ohio man who was diagnosed with cancer in 2012. He and his wife decided to fly to MD Anderson in Texas for treatment, where– because they wouldn’t accept his barebones, out-of-state insurance– he was charged “chargemaster” rates. These are the exorbitant rates detailed in Brill’s first Time article: generic tylenol for $1.50 per pill (the price of an entire bottle, CT and PET scans at 400% to 1,100% for than what Medicare would pay, his cancer drug at a 400% markup, etc.

The segment correctly points out that Obamacare doesn’t really address the chargemaster issue; if you don’t have coverage, hospitals can still charge whatever they want. However, in the context of a piece about Obamacare’s effect on healthcare costs, the inclusion of Recchi’s story is just confusing. Even before the ACA, the vast majority of Americans had health coverage; while it’s unfair that the uninsured can be charged so much more, that’s not what’s driving American health costs– it’s the high rates insurers and the government pay here compared to other countries. The 60 Minutes piece mentions none of this.

Meanwhile, healthcare spending in the U.S. is growing at its lowest rate since the 1960’s. As Thomas Huelskoetter of the Center for American Progress explains, “Some analysts who have examined the recent trend believe that the ACA has also played a role — and even many analysts who see the economy or other factors to be the primary cause acknowledge that the ACA at least partially contributed to the slowdown.”

BRILL: The much touted, you know, savings that the president keeps talking about, it’s still increases.

BRILL: You know, if there’s a stat, if there’s a piece of data that comes out that says that the galloping increase in the cost of some aspect of health care has started galloping a little less, it’s touted as the cost is going down. It’s just ridiculous.

Again, Brill is wrong. Some data has shown a definite decrease in costs– for example, the amount Medicare spends per beneficiary has declined over the past few years. In 2014 the price of hospital care that all insurers pay declined, the first time that’s happened since the government started keeping track in 1998. 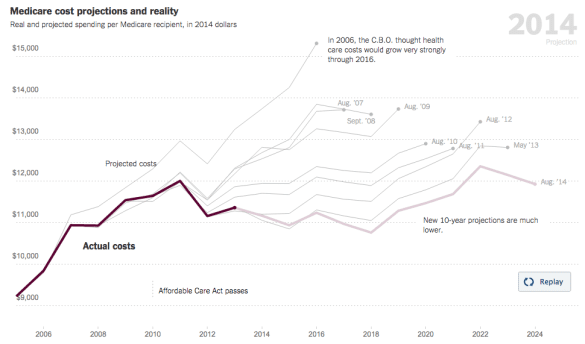 The potential for future reform

The most frustrating thing about the 60 Minutes piece is that it comes really close to making a good point about a real shortcoming of the ACA: it’s not that the ACA does nothing to control costs, but it mainly focuses on controlling costs by reducing the amount of care we receive, and does little to reduce the price we pay (either out of pocket or through insurers) for that care.

Many of the cost control ideas left out of the ACA would tackle this underlying problem, so Brill is right that we could be doing much more to bring down healthcare costs– although he’s pessimistic about the prospects for that happening in the future:

STAHL: Is there any way now to go back and add cost containment?

It’s a little unclear why he says it’s more impossible now. We assume he’s referring to the stalemate between the president and a Republican-controlled Congress– as long as that continues, the chance of any major bill getting passed is slim.

However, Brill himself has suggested future reforms that may not require Congress to act. As part of his proposal calling for health systems to expand and form their own insurance companies, he includes six regulations to rein in their power. These regulations are the most interesting part of his proposal, because, at least according to Brill, “I don’t think you’d have to pass a single law. You just need to have a different outlook at the Federal Trade Commission [which oversees hospital monopolies and enforces anti-trust law].”

Perhaps Brill is onto something– and it would be great if a program like 60 Minutes would take a close look at whether this approach could actually work. Instead the segment was yet another example of what we’ll call “Billy Madison reporting”: a story where viewers are actually less informed about the ACA after watching it.

Next post: Red states are using Supreme Court decisions to ensure they don’t benefit from Obamacare, yet still pay for it. Why?