Warning: Use of undefined constant wp_cumulus_widget - assumed 'wp_cumulus_widget' (this will throw an Error in a future version of PHP) in /home/customer/www/whatifpost.com/public_html/wp-content/plugins/wp-cumulus/wp-cumulus.php on line 375
 What Health Reform Means for Small Businesses
≡ Menu 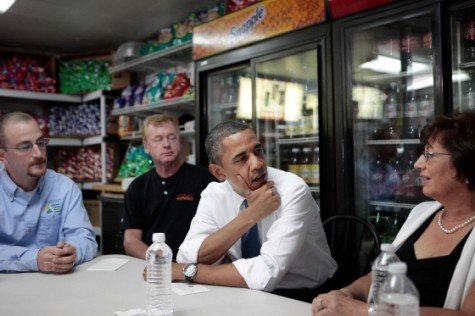 At an economic roundtable last week, President Obama called small businesses the “backbone of our economy and cornerstones of our communities.”  It’s true: small business accounts for about half of America’s GDP and more than half of all employment.  They create two out of every three new jobs- especially important these days, while unemployment is still high.

Yet for decades our health care system has placed small business at a competitive disadvantage.   Not only are the administrative costs of setting up and maintaining a health plan much higher for small businesses, they also have to pay higher premiums than large corporations– 18% higher on average.

Rising health care costs in recent years have been particularly hard on small businesses too.  According to the Chicago Tribune:

“To deal with soaring health costs, many small businesses have had to switch insurance carriers, push more of the financial burden on to workers, or reduce, if not eliminate, coverage. About 12 percent of nearly 500 small businesses polled in a dozen states dropped coverage for their workers in 2008 and 2009, according to a report by the Illinois Main Street Alliance. In addition, 35 percent reported switching within the past two years to insurance that covers fewer services.”

Will the new health care law help small business?  Right now only 24% of owners think so… but that doesn’t mean they’re right.  It’s a complicated law and surprisingly little media coverage has been devoted to how it will affect them.  And so we’ve put together a brief primer on what the law means for “the backbone of our economy.”

How Reform Helps: Starting this year, small businesses who have:

The credit goes up to 50% after 2014 if they purchase insurance through an exchange, and it continues for two years after that.  The size of the credit depends on the number of employees and their average wage.

The Down Side: Critics have pointed out that the credit is only available to the smallest businesses and only lasts through 2016.

However, supporters would argue that medium-sized businesses already provide coverage, and it’s the smallest businesses that need the most help.  According to a report by Families USA:

Some small business owners are already happily planning on taking advantage of the law. Jim Houser, an auto mechanic and owner of a shop in Portland, Ore., said in a telephone interview that the tax credits will save him nearly $15,000 a year in health care coverage costs. He provides coverage to 13 employees at his shop. Houser, who is a member of the Main Street Alliance — a small business group that supports the new law — said he’ll use the extra money he keeps from the tax credits to give raises to his workers that he’s put off for the last couple years. And in 2014, he’ll use health insurance exchanges to seek coverage for employees, he said.

As we mentioned earlier, small businesses face higher premiums than large businesses, higher administrative costs to set up and maintain a health plan, and they they lack the bargaining power of larger companies in negotiating with insurance companies.

“Would have lower administrative costs, on average, than the policies those firms would buy under current law, particularly for very small firms.”

Small businesses – with fewer than 50 employees – are exempt from mandatory requirements. Businesses with more than 50 employees will be required to provide coverage as of 2014 or pay a fine. This could be a new cost for some medium-sized business, but again, nearly all companies this size already provide insurance.

According to one business owner, the mandatory coverage requirement for larger employers, “means those of us who provide health care coverage will no longer, in effect, be subsidizing our competitors (whose employees rely on public health services) who don’t.”

Large corporations don’t have to worry when one employee gets sick- costs are spread out among so many people that the low costs of covering all the healthy employees will balance out the high costs of a few sick ones.  Small businesses aren’t so lucky- if one employee gets sick, the insurance company can jack up your premiums.

We’ve all heard stories of people who would like to leave their current job, but can’t because they worry about finding insurance coverage for themselves or their family– especially if they have a pre-existing condition.  This “job lock” causes many workers to stay at large firms even if they would be more productive working at a small business or becoming an entrepreneur.

Currently, the cost of treating the uninsured adds a “hidden tax” of over $1,000 to every health care premium.

Starting this year, if an insurance plan covers dependent children, it will have to offer that coverage until they turn 26– unless those children can get insurance through their own employer.  We have to admit, this is an added cost for some small businesses that they won’t benefit directly from.  However, it will be a major help for adult children of their employees.  Young adults who are going to school or are just starting out in their careers are much less likely to have a job that provides health insurance.

X. Other New Rules for Plans

Since a major component of health care reform was the idea that “if you like your current insurance you can keep it” current insurance plans will be grandfathered in.  This means that small businesses can keep plans that doesn’t meet some of the coverage requirements of the new law… as long as they don’t make significant changes.  Plans can raise premiums to keep up with rising health care costs and make some small changes to benefits or out of pocket costs.

But changes that would cause a plan to lose its grandfathered are things like:

Next post: How states will shape the fate of health reform