Warning: Use of undefined constant wp_cumulus_widget - assumed 'wp_cumulus_widget' (this will throw an Error in a future version of PHP) in /home/customer/www/whatifpost.com/public_html/wp-content/plugins/wp-cumulus/wp-cumulus.php on line 375
 What happens now?
≡ Menu 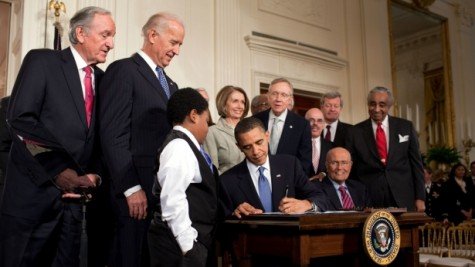 The morning after the House voted on health care reform, I took a walk to the convenience store up the street to grab a soda.  While I wandered around looking for a snack, the rest of the store was in the middle of a conversation about the bill.

One of the clerks asked, “So what happens now that they passed that health care thing?  All I’ve been hearing about in the last couple days was something about abortion, but that’s it.

The other clerk replied, “I don’t know.  I just hope my niece can finally get covered now.”

“I’m just glad they finally did something,” said a customer on her way out of the store after paying for gas.  “We keep paying more and more for less and less.”

The media coverage has tended to focus on the voting process or controversial issues like abortion, and so a lot of people, it seems, are still pretty hazy on the actual details of the bill.  Even my roommate, who hears me talk about health care reform all the time, was surprised (and a little outraged) when I told her that most people won’t get coverage until 2014.  “So wait,” she said.  “What happens now?!”

Good question.  Luckily, the House of Representatives has created a list of some of the key provisions of the new bill (err… sorry, now that it’s passed, it’s the new health care LAW!) that go into effect almost immediately:

2.  BEGINS TO CLOSE THE MEDICARE PART D DONUT HOLE—Provides a $250 rebate to Medicare beneficiaries who hit the donut hole in 2010.  Effective for calendar year 2010. (Beginning in 2011, institutes a 50% discount on brand‐name drugs in the donut hole; also completely closes the donut hole by 2020.)

4.  HELP FOR EARLY RETIREES—Creates a temporary re‐insurance program (until the Exchanges are available) to help offset the costs of expensive health claims for employers that provide health benefits for retirees age 55‐64.  Effective 90 days after enactment

5.  ENDS RESCISSIONS—Bans health plans from dropping people from coverage when they get sick.  Effective 6 months after enactment.

6.   NO DISCRIMINATION AGAINST CHILDREN WITH PRE‐EXISTING CONDITIONS—Prohibits health plans from denying coverage to children with pre‐existing conditions.  Effective 6 months after enactment. (Beginning in 2014, this prohibition would apply to all persons.)

8.  BANS RESTRICTIVE ANNUAL LIMITS ON COVERAGE—Tightly restricts new plans’ use of annual limits to ensure access to needed care.  These tight restrictions will be defined by HHS.  Effective 6 months after enactment. (Beginning in 2014, the use of any annual limits would be prohibited for all plans.)

9.  FREE PREVENTIVE CARE UNDER NEW PRIVATE PLANS—Requires new private plans to cover preventive services with no co‐payments and with preventive services being exempt from deductibles.  Effective 6 months after enactment. (Beginning in 2018, this requirement applies to all plans.)

10. NEW, INDEPENDENT APPEALS PROCESS—Ensures consumers in new plans have access to an effective internal and external appeals process to appeal decisions by their health insurance plan.  Effective 6 months after enactment.

12. IMMEDIATE HELP FOR THE UNINSURED UNTIL EXCHANGE IS AVAILABLE (INTERIM HIGH‐RISK POOL)—Provides immediate access to insurance for Americans who are uninsured because of a pre‐existing condition ‐ through a temporary high‐risk pool.  Effective 90 days after enactment.

13. EXTENDS COVERAGE FOR YOUNG PEOPLE UP TO 26TH BIRTHDAY THROUGH PARENTS’ INSURANCE – Requires health plans to allow young people up to their 26th birthday to remain on their parents’ insurance policy, at the parents’ choice.  Effective 6 months after enactment.

14. COMMUNITY HEALTH CENTERS—Increases funding for Community Health Centers to allow for nearly a doubling of the number of patients seen by the centers over the next 5 years.  Effective beginning in fiscal year 2010.

16. PROHIBITING DISCRIMINATION BASED ON SALARY—Prohibits new group health plans from establishing any eligibility rules for health care coverage that have the effect of discriminating in favor of higher wage employees.  Effective 6 months after enactment.

17. HEALTH INSURANCE CONSUMER INFORMATION—Provides aid to states in establishing offices of health insurance consumer assistance in order to help individuals with the filing of complaints and appeals.  Effective beginning in FY 2010.

It’s all good stuff.  And what this all means is that while the main part of the new program doesn’t go into effect for a while, if you get sick or already have a chronic condition, there will be some help.

Next post: What’s in the new health care law? Part I: The exchanges