Warning: Use of undefined constant wp_cumulus_widget - assumed 'wp_cumulus_widget' (this will throw an Error in a future version of PHP) in /home/customer/www/whatifpost.com/public_html/wp-content/plugins/wp-cumulus/wp-cumulus.php on line 375
 We’re number one! Err.. make that 27.
≡ Menu

You probably won’t be surprised to find the U.S. once again ranked near the bottom of wealthy countries in life expectancy, despite spending much more on healthcare per person. The most recent example: a study published last week by the Journal of the American Medical Association looking at health outcomes in the 34 wealthy countries that make up the Organisation for Economic Cooperation and Development (OECD). Researchers found that between 1990 and 2010 the United States dropped from 20th to 27th in life expectancy, 14th to 26th for healthy life expectancy (the number of years the average person can expect to live in full health, without disease or disability), and 23rd to 28th in years of potential life lost.

According to the study, which was led by Dr. Christopher Murray of the University of Washington’s Institute for Health Metrics and Evaluation:

“The United States spends the most per capita on healthcare across all countries, lacks universal health coverage, and lags behind other high-income countries for life expectancy and many other health outcome measures […] In the last two decades, improvements in population health in the United States did not keep pace with advances in population health in other wealthy nations.”

What makes this particular study so interesting is that it dives into the data behind life expectancy. The researchers also looked at the years of life lost to a number of different diseases in each country– and what they found debunks the usual excuses from the “U.S. has the greatest healthcare system in the world” crowd.

Every time a new study shows the U.S. at the bottom of life expectancy rankings, defenders of the U.S. healthcare status quo make the same claims:

Let’s see how they stack up.

Claim 1: Life expectancy in the U.S. is skewed because of high murder, suicide, and accident rates

Conservatives have long complained that comparing countries’ life expectancies is flawed because the U.S. has much higher death rates from murder, suicide, and accidents– things that have nothing to do with the quality of healthcare. Also, deaths from these causes have a disproportionate effect on life expectancy because the victims tend to be younger, on average, than those who die from disease. Look at life expectancy without these causes, they say, or compare health outcomes on specific diseases to see how well the U.S. health system really performs.

All right, well check out this graph from the study: 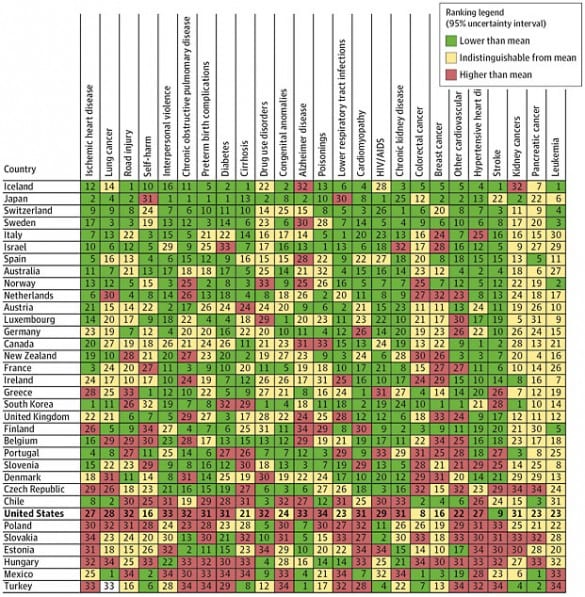 Now look at the United States. It’s almost all red and yellow– in fact we only have one category (years of life lost from strokes) where we’re doing better than average. And it’s not just deaths from murders and accidents where we’re significantly below average– it’s things like heart disease, lung cancer, diabetes, HIV, and kidney disease– all things that our very expensive healthy system should be able to treat.

Claim 2: Life expectancy in the U.S. is skewed because of our racial diversity

It’s true that certain ethnic groups are more susceptible to certain diseases, but again, a close look at the specific diseases shows that genetics aren’t the reason for our poor health outcomes. Aaron Carroll, a professor of pediatrics and health services researcher at the University of Indiana, who blogs at the Incidental Economist, writes:

Some of you will feel the urge to blame this on the racial or ethnic makeup of the US. I encourage you to look at the variety of causes of years of life lost. They don’t favor just one group. They’re all over the place. And we do pretty badly in most of them.

That’s not to say race doesn’t play a role in America’s low rank in life expectancy. Blacks and latinos are much less likely than whites to have insurance or a regular source of care, leading to worse health outcomes. To give just one example— the infant mortality rate for African-Americans is more than double that of non-hispanic whites. Still, this is almost certainly a problem with access to prenatal care– in other words it’s the result of a flaw in our healthcare system.

Claim 3: Life expectancy in the U.S. is skewed because of our less healthy lifestyles

There is something to this actually. The United States has much higher obesity rates than other OECD countries (with the exception of Mexico, which recently pulled ahead of us), and obese people die on average eight to ten years earlier than their peers. Fixing our health system to improve access and quality of care can help address some of the problems associated with obesity (higher rates of heart disease, diabetes, and certain kinds of cancer), but there’s only so much that doctors and hospitals can do.

Still, other countries with relatively high obesity rates, like Australia and New Zealand, managed to rank higher than thinner countries like France, Portugal, and Denmark. Great Britain is relatively fat, yet comes in third in fewest years of life lost to diabetes– a disease heavily correlated with obesity. Clearly it’s not just our weight that’s bringing us down.

Instead the problem really does seem to be our healthcare system. It’s not the worst (and Obamacare should help fix some of the most glaring issues), but it’s far from the “greatest in the world.” The Incidental Economist’s Carroll is hopeful though:

We could have the best health care system in the world. We’ve got the money and the necessary pieces to get really, really good outcomes. But we need to be much smarter about it if we’re going to do so.

Next post: The campaign to educate young people about Obamacare… and the GOP push to stop it