Warning: Use of undefined constant wp_cumulus_widget - assumed 'wp_cumulus_widget' (this will throw an Error in a future version of PHP) in /home/customer/www/whatifpost.com/public_html/wp-content/plugins/wp-cumulus/wp-cumulus.php on line 375
 Watch Mitt Romney defend the individual mandate (and do a pretty good job at it)
≡ Menu 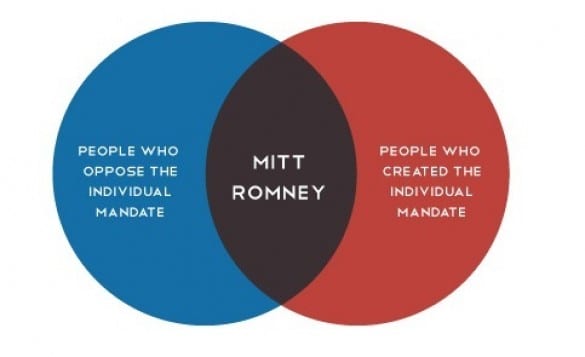 For more fun with Mitt Romney and Venn diagrams, check out Upworthy.com

The Supreme Court decision upholding the health reform law has ignited a silly debate: should the individual mandate be considered a tax or a penalty?

The Obama administration says that the mandate is just a penalty that happens to be administered through the tax code, while Mitt Romney has joined Republicans in attacking it as a massive tax increase (some have even called it the largest in US history, which, even if you believe the mandate is a tax, is still not even close to true).

As Ezra Klein pointed out last week, whatever it’s called, it does exactly the same thing. People without coverage will have to pay $695 or 2.5% of their income (and exemptions will be granted for things like financial hardship, religious objections, or if you can’t find affordable coverage).

Rather than asking whether it’s a tax or a penalty, the real question is this: Is it a good idea? And one of the best explanations that we’ve heard of why the individual mandate is a good idea has come from…  Mitt Romney?

The video is from a talk Mitt Romney gave on health care last year at the University of Michigan. He starts by explaining Massachusetts’ “free rider” problem: if people who can afford coverage choose to go without it, they can still get care when they get sick, which drives up the cost of insurance for everyone else.

Romney lays out three options for dealing with this problem:

Now obviously many people aren’t choosing to go without insurance– they just can’t afford it or have pre-existing conditions. Both Obamacare and MassCare solve these problems by preventing insurers from discriminating based on health status and by providing subsidies on an income-based sliding scale to help make insurance more affordable.

Now, we should point out that in the video Romney is wrong about a couple things. For one, people without insurance don’t get “free” care— doctors and hospitals still charge them, and the cost of care is so expensive that many people go bankrupt trying to pay these bills.

Really we have pretty much the worst possible system– the uninsured don’t get free care, yet the rest of us still end up paying most of the cost of treating them. The American Hospital Association reports that hospitals lost more than $40 billion in unpaid bills in 2010 alone, bills that are passed along to everyone in the form of higher premiums and government payments to hospitals. And as Romney correctly points out, the uninsured often can’t get preventive care, so when they finally do get treatment it’s in the most expensive way possible: through the emergency room.

Also, people choosing to go without insurance was pretty uncommon in Massachusetts before reform, just as it is in the rest of the country now. People know that if they get sick they’re screwed– insurance companies can deny you coverage and you’ll go bankrupt trying to pay hospital bills. However, free riders do become a big problem when we say that insurance companies can’t deny coverage to people with health problems. Some people who can afford to buy insurance will wait until they get sick to get coverage– they end up paying so little in premiums that they get nearly all of their care for free, driving up the cost of care for everyone else.

But despite these small quibbles Romney’s main point still stands– the individual mandate is necessary to prevent people from gaming the system at the expense of everyone else.

In the rest of the video, when Romney tries to establish distinctions between Romneycare and Obamacare, he just looks silly (for example, every point on the slide before the one about the individual mandate is misleading). As Jonathan Cohn wrote in The New Republic, “The two plans expand health insurance in virtually the same way, not least because some of the same people helped design them.”

But when he describes the individual mandate, he does a better job of selling it– and in a very Republican-friendly way– than almost anyone we’ve seen.

[*By the way, a fourth much simpler and cheaper way to eliminate free riders would be to expand Medicare to cover everyone. But that’s a topic for another post…]

Previous post: Is the mandate a tax or a penalty? It doesn’t matter