Warning: Use of undefined constant wp_cumulus_widget - assumed 'wp_cumulus_widget' (this will throw an Error in a future version of PHP) in /home/customer/www/whatifpost.com/public_html/wp-content/plugins/wp-cumulus/wp-cumulus.php on line 375
 Top Health Care Stories of 2010
≡ Menu 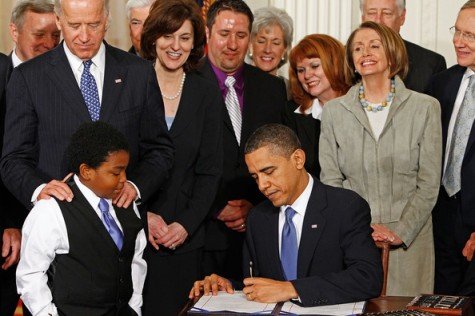 With the What If Post computer out of commission for the first couple weeks of January (after I accidentally bashed in the screen with a space heater), we didn’t have a chance to read many of the Best of 2010 lists that were published at the start of the new year.  This week we finally had a chance to check them out, and we noticed there wasn’t a list for health care news.  It was a big year, and so we present– hopefully better late than never– the What If Top Five Health Care Stories of 2010, with updates of what’s happened with each issue since we covered it.

Vice President Joe Biden probably put it best– the passage of health reform was a “big f—ing deal.”  Thirty-two million Americans are expected to gain coverage at a cost of $940 billion over the next ten years. If you’re still confused about what health care reform does and how it will be paid for, check out our series explaining what’s in the new health care law. There’s a post on each section of the Affordable Care Act.  If you want the quick, elevator pitch explanation of the basics of reform, check out this post: What did health reform do? In one of the first acts of the new Congress, Republicans in the House voted to repeal reform, but they don’t have anywhere close to the number of votes they’ll need in the Senate or to overcome President Obama’s veto. Meanwhile, here’s a list of reforms from the Affordable Care Act that will take effect in 2011.

The January 12, 2010 earthquake that struck Haiti was one of the biggest public health disasters ever.  With an epicenter just outside of Port-au-Prince, the massive 7.2 magnitude quake killed between 250,000 and 300,000 people, injured more than 300,000, and left over 1 million homeless. Haiti had weak building codes and even weaker enforcement– a huge number of buildings collapsed during the quake. (Sidenote for the anti-regulation crowd: New Zealand has strict building codes, and the 7.1 magnitude earthquake in Christ Church left few buildings completely destroyed.) One year later, the situation hasn’t improved much.   A cholera outbreak that began in October has infected 150,000 people and killed 3,300 so far.  Meanwhile, Oxfam reports that only 5% of the rubble has been cleared, and only 15% of the required basic and temporary houses have been built.  Roland Van Hauwermeiren, country director for Oxfam in Haiti said:

“This has been a year of indecision and it has put Haiti’s recovery on hold. Nearly one million people are still living in tents or under tarpaulins and hundreds of thousands of others who are living in the city’s ruins still do not know when they will be able to return home.”

The New York Times has made some excellent videos on Haiti for the anniversary of the quake.  This one documents a year in the lives of two severely injured Haitian children who were flown to Boston for surgery, physical therapy and recovery, and then returned home to Haiti. (Warning: There are some graphic images):

Partners in Health, the Boston organization that arranged for the children’s treatment, and who we’ve written about before, has put together a plan for rebuilding Haiti’s public health and health education systems.  To learn more or donate, check out their website here.

As we wrote earlier this year, even though the recession has ended, the slow recovery has meant big budget shortfalls in many states. Medicaid in particular has been a major issue. Medicaid accounts for 21% of all spending from all sources according to the National Association of State Budget Officers.  During economic downturns the money states bring in from taxes drops, but at the same time Medicaid expenditures increase as more people enter the program.  Enrollment in Medicaid and the Children’s Health Insurance Program (CHIP) is estimated to increase by one million for every 1 percent increase in the unemployment rate, costing states billions.  And states, unlike the federal government can’t run a deficit during tough economic times, so they’re forced to raise taxes and slash spending, which hurts the economy even more. To help avert a major financial disaster at the state level, the 2009 stimulus contained a temporary increase in the amount the federal government contributes to Medicaid.  It was originally set to expire at the end of 2010, but with states still looking at major budget deficits, Congress voted to extend the funding until June 2011.  However, Congress only approved $16.1 billion– the states had expected $24 billion in extra funding, meaning they still had to scramble to fill the shortfall. A number of states responded by taking a scalpel to some Medicaid programs:

The cuts may get worse if the stimulus funding isn’t extended beyond June 2011.  According to Brian Sigritz, director of state fiscal studies at the National Association of State Budget Officers in Washington: “We’re heading for a cliff in July.”

As we mentioned in an earlier post, three relatively unnoticed new rules from the EPA could prevent nearly 100,000 premature deaths every year.  In the absence of a cap and trade bill from Congress, the EPA may soon begin regulating CO2 and other climate changing gases, which could do even more to improve public health.

Despite obstruction from Senator Tom Coburn, Congress finally passed a food safety bill that will give the FDA new powers to regulate against food borne illness.  Foodborne illness (which includes nasty diseases like salmonella and e. coli) currently affects 76 million Americans every year, costing us $152 billion, while hospitalizing 300,000 and killing 5,000 people. Say what you will about the last Congress, but the food safety bill is one of many (including the Affordable Care Act, and the 9/11 first responders bill) that will save money and more importantly, save lives.

Watch Part 2 here: http://www.stopspewman.com/ There you have it– our top stories of 2010. Thanks for reading over the past year, and stay posted for more coverage of health reform and other health issues in 2011!

Previous post: Repealing reform: here’s what would happen (and it’s not good)