Warning: Use of undefined constant wp_cumulus_widget - assumed 'wp_cumulus_widget' (this will throw an Error in a future version of PHP) in /home/customer/www/whatifpost.com/public_html/wp-content/plugins/wp-cumulus/wp-cumulus.php on line 375
 The sketchy accounting behind this year’s Republican budget proposals
≡ Menu

The sketchy accounting behind this year’s Republican budget proposals 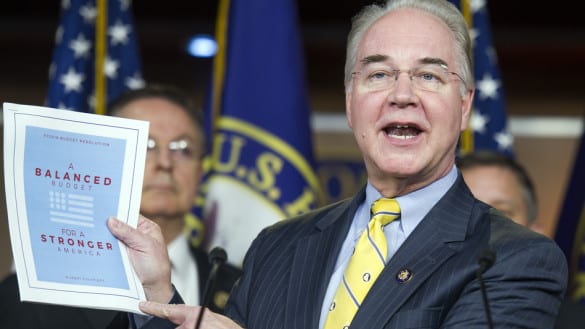 Since the Republicans took over the House in 2011, every budget they’ve proposed has looked more or less the same, especially with respect to healthcare. Each year their budget calls for privatizing Medicare, massive cuts to Medicaid, and repealing Obamacare with no plan to replace it.

We thought this year might be different. After all, it’s the first time since 2011 the House Budget committee has been chaired by someone other than Paul Ryan (he’s moved on to chair the more powerful Ways and Means committee), and it’s the first time in almost a decade that Republicans in the Senate have had to produce a budget of their own.

But nope, it’s pretty much just more of the same: privatizing Medicare, massive cuts to Medicaid, and repealing Obamacare with no plan to replace it. What’s different now are the budget gimmicks. In the past, they’ve been vague on how they would cut other domestic spending, but their healthcare plans were pretty straightforward. This year, both the House and Senate plans call for trillions of dollars in healthcare savings– but where most of that savings comes from is a detail Republicans say they’ll figure out later.

The new House Republican plan for Medicare is basically the same thing they’ve been proposing since 2011: scrapping the current Medicare system, and replacing it with vouchers (which they call “premium support”) to pay for private insurance. And just as before, this new system would only apply to people who are younger tan 55 now. However, it’s not completely identical– there are a handful of interesting changes this time around.

Republicans have tweaked the way the vouchers would be calculated. As their budget proposal points out:

In September 2013, the Congressional Budget Office (CBO) analyzed premium support options. They found that a program, in which a premium support payment was based on the average bid of participating plans, would result in savings for beneficiaries, as well as the Federal Government.

Looking under the hood of that CBO report, we noticed a few things:

So in other words we’d be limiting the doctors and hospitals seniors have access to, while at the same time cutting back on the amount of care they receive, all to cut Medicare spending by 2%… maybe.

The Senate budget doesn’t say anything about premium support. Instead it simply says that Medicare spending will be cut by $430 billion without saying how. Republican Senators claim that’s because Medicare is under the jurisdiction of the Senate Finance Committee, and that the Budget Committee “doesn’t have the power to write the details of Medicare.”

This excuse sounds fishy since ending government-managed Medicare and replacing it with a voucher system is hardly a “detail.” It seems like the real reason the Senate budget doesn’t mention it is because privatizing Medicare is deeply unpopular and vulnerable Republican senators don’t want to go on record voting for it. As The New York Times notes:

In 2013, when the Senate was presented an amendment to prohibit replacing Medicare’s guaranteed benefits “with the House passed budget plan to turn Medicare into a voucher program,” 96 senators agreed. Only three, Mr. Cruz, Mr. Paul and Senator Mike Lee, Republican of Utah, supported the House’s vision.

Both the House and Senate budgets eliminate Obamacare’s taxes and Medicare savings, replacing them with… nothing. Back when Paul Ryan proposed his first budget, we pointed out an enormous hypocrisy: Republicans had hammered the Affordable Care Act for its “cuts” to Medicare, yet his budget kept those same cuts.

This time around, Republicans make a point of saying that they’ll repeal the ACA in its entirety, Medicare cuts and all. However, that leads to what the The New York Times describes as a “significant budget gimmick.” Republicans say they’re repealing Obamacare’s tax increases and Medicare cuts, yet their budgets still include the $2 trillion in revenue/savings those provisions bring in. As Margot Sanger-Katz of The New York Times Upshot blog points out, the House budget manages this by “ask[ing] Congress to find other savings in Medicare program that are ‘deficit neutral,’ though it does not propose any specific policies that might achieve similar savings.”

Policy wonks have a name for this kind of gimmick: a magic asterisk. What’s shocking though, is the size of the asterisk. For example, on the Senate side, between the $2 trillion from replacing Obamacare’s taxes with unspecified revenue, and the $430 billion in savings from unspecified Medicare reform, nearly half of its $5.1 trillion in spending cuts come from healthcare-related budget gimmicks.

Right now the federal government pays a share of the cost of covering every individual enrolled in Medicaid; the exact percentage it kicks in ranges from 50% (in wealthy states like Massachusetts) to 74% (in much poorer Mississippi). It also pays 100% of the cost for those who are newly eligible for the program, thanks to Obamacare’s Medicaid expansion (eventually the federal share will scale back to 90%).

The Republican budget would cut federal spending on Medicaid in two ways. First, and most simply, it would repeal Obamacare, eliminating the Medicaid expansion. This would save something like $400 billion over the next decade, but it also means 10 million people who have gained Medicaid coverage under the ACA would lose it.

It would also cut Medicaid spending through block grants, which are a little more complicated. Block granting Medicaid means that instead of the federal government paying a percentage of each enrollee’s cost, states would get a single lump sum. Now, there’s nothing about block grants themselves that save money– they simply change how the government pays for Medicaid, not how much it spends. However in the Republican budget, the block grant disguises a massive spending cut: rather than giving states a block grant equal to the amount of money they received under the current system, states would be given about $500 billion less over the next decade. Combine that with the elimination of the Medicaid expansion, and the Republicans’ budget would cut $913 billion from the program.

Republicans say that along with block grants, Medicaid rules would be changed to give states more “flexibility” to decide how they spend their Medicaid money. However, as Ezra Klein explained when Republicans first proposed Medicaid block grants:

And, as the Congressional Budget Office explained back then, states really have just two options:

In other words states will have the “flexibility” to raise taxes, kick people out of the program, cut back on the health and longterm care that Medicaid’s poor and disabled enrollees receive, and/or pay providers even less to see Medicaid patients. It’s their call.

[For more on how the Republican plan to block grant Medicaid would work, check out our earlier post here.]

Unsurprisingly, the Republican budgets call for repealing Obamacare and include no plan for replacing it. The House budget simply recommends that Congress develop a new health reform package that will “increase access to quality, affordable health care by expanding choices and flexibility for individuals, families, businesses and states while promoting innovation and responsiveness.”

However, as Jonathan Chait notes, whenever House Republicans are accused of not having a replacement for Obamacare, they point to a plan proposed by Georgia Representative Tom Price. It’s a sketchy plan that the CBO has never analyzed, but it is technically a plan. Yet, as Chait points out, this supposed Obamacare replacement wasn’t included in the Republican budget:

If Republicans wanted to replace Obamacare with Tom price’s health-care “plan,” they would include it in their budget. Tom Price probably has the clout to get his health-care plan onto the desk of the person in charge of writing the House Republican budget, who also happens to be Tom Price.

But the Price-authored budget ignores the Price health-care plan for the same reason the old Ryan budget ignored the Ryan poverty plan. It’s a thing Republicans want to say they’re for, but don’t want to make the sacrifices necessary to do it. The place where a party reconciles its competing priorities is its budget.

We should also mention that repealing Obamacare without providing an equally comprehensive replacement would leave 16.4 million people uninsured.

You may remember that at the beginning of the year we wrote a post about how Republicans had changed the rules for how the Congressional Budget Office scores bills, in order to make it look like tax cuts (and only tax cuts) can partly pay for themselves by generating economic growth.

The House budget was one of the first bills to trigger this new “dynamic scoring” rule. This time around it didn’t make a huge difference– according to the CBO, dynamic scoring accounted for just $147 billion in increased revenue over the next decade (that may sound like a lot, but it represents only 0.3% of all federal spending during that time). Still it’s aggravating to see line in the budget touting the economic benefits of tax cuts, yet the economic harm from its massive cuts to domestic spending is ignored.

Previous post: The latest Supreme Court Obamacare case hinges on Roberts and Kennedy– here’s what they’ll be thinking about.