Warning: Use of undefined constant wp_cumulus_widget - assumed 'wp_cumulus_widget' (this will throw an Error in a future version of PHP) in /home/customer/www/whatifpost.com/public_html/wp-content/plugins/wp-cumulus/wp-cumulus.php on line 375
 The Senate health bill is terrible for women who want to have children. And women who don’t.
≡ Menu

The Senate health bill is terrible for women who want to have children. And women who don’t. 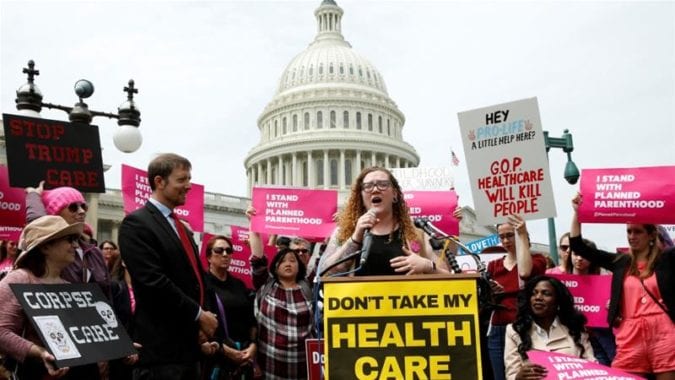 Our last post looked at how the Senate health bill would be particularly bad for older Americans, but that’s definitely not the only group the bill would disproportionately harm. The bill (which was written by 13 men) also manages to reduce access to every type of reproductive healthcare for women: not only does it make it harder for women to access birth control or terminate a pregnancy, it also makes it much harder for women who are pregnant to get maternity care.

How the bill harms women who want to have children

Massive Cuts to Medicaid: The Senate bill cuts Medicaid funding by 26% in its first decade, and by more than one-third by 2036. These cuts go beyond just eliminating Obamacare’s Medicaid expansion, which provided coverage to anyone making less than 138% of the federal poverty line ($16,643 annually for an individual); in the long run they mean much less funding for traditional Medicaid services as well. 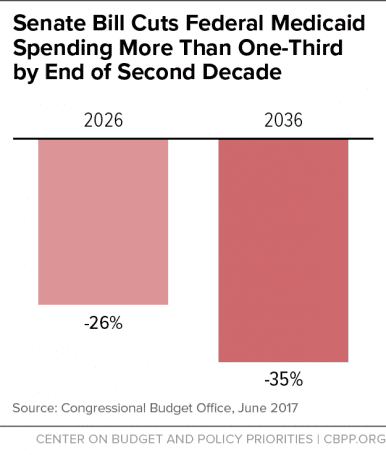 One of the most important services that Medicaid provides is coverage for pregnant women. Even before the Affordable Care Act, pregnant women with incomes below 138% of the poverty line qualified (and in most states the income guidelines are much higher), and Medicaid now covers around half of all births in the U.S.

The Senate bill’s massive cuts to the federal part of Medicaid spending mean that states with already tight budgets will have to make tough choices– many states would be forced to cut back on eligibility or services that are currently covered. The United States already has the highest maternal mortality rate in the developed world, at least in part because Medicaid only covers women for 60 days after they give birth in many states (maternal mortality statistics include deaths up to a year after the pregnancy’s end). The Senate bill’s cuts to Medicaid will almost certainly increase the number of women who die after childbirth– and no, it’s not alarmist to say so.

Lets states opt out of essential health benefits: As we explained in an earlier post on the Senate bill, the ACA says that all insurance plans have to cover ten broad categories of essential benefits, one of which is “pregnancy, maternity, and newborn care.”

For some reason many Republicans– who remember, are supposedly the “pro-life” party– have attacked Obamacare for the so-called “crazy regulations that Obamacare puts in, … such as a 62-year-old male having to have pregnancy insurance.” It’s hard to know where to start with that, but current senator and former doctor Bill Cassidy (R-La.) put it pretty well when he reminded his colleagues, “As best I can tell, women don’t get pregnant without sperm.”

The Senate bill would let states opt out of requiring that insurers have to cover any essential benefits. Given how much Republicans have complained maternity coverage, it’s likely first on the list of benefits that states would ax, even though that would lower premiums by only 5%. Prior to the ACA, maternity care was available in just 12 percent of plans on the individual market, so if states say insurers no longer have to provide maternity coverage, expect most insurers to drop it from their plans. Most insurers would instead offer women who want to have children a maternity care “rider” that they could buy in addition to their regular coverage– the CBO estimated these riders would cost women over $1,000 per month. The CBO also says that some insurers “could offer a lower-cost rider providing less-than-comprehensive coverage — with, for example, a $2,000 limit.” (At this point it’s worth noting that the average cost of a pregnancy in the U.S. is $17,000.)

And again, just as with cutting Medicaid funding, making it harder for women to afford maternity care will have major repercussions for the health of infants and young mothers.

How the bill harms women who don’t

Cuts funding for Planned Parenthood: The Senate bill would prevent federal funds from going to Planned Parenthood, most of which come from women covered by Medicaid. The bill itself only cuts off funding for one year, but it is expected that Republicans would renew that for as long as they control Congress and the White House.

Federal law already prevents federal money from paying for abortions– the services that federal funding pays for at Planned Parenthood are things like cancer screening, STD testing and treatment, and birth control. According to the Congressional Budget Office:

To the extent that access to care would be reduced under this legislation, services that help women avoid becoming pregnant would be affected. The people most likely to experience reduced access to care would probably reside in areas without other health care clinics or medical practitioners who serve low-income populations. CBO projects that about 15 percent of those people would lose access to care.

The CBO also expects that the elimination of Planned Parenthood funding will lead to several thousand additional births annually. Also, because half of these births would be covered by Medicaid, the budget savings from cutting this funding would only amount to $146 million.

Makes it harder for women to buy plans that cover abortion: Under the ACA, if you qualify for the federal tax credit that reduces your premiums, you are allowed to buy a plan that covers abortions. Insurers just have to make sure the money the plan spends on abortions comes from somewhere else and not from that tax credit (since again, under current law, federal money can’t go towards abortions). In practice this means insurers will have women pay a separate premium or purchase a rider for abortion coverage.

The Senate bill, on the other hand, would ban abortion coverage (except in cases of rape or incest or to save the mother’s life) in all plans sold on the federal marketplaces. It also prohibits small employers who receive federal tax credits from offering plans that cover abortion.

These provisions could punish the same woman repeatedly

These provisions are all harmful on their own, but they’re especially terrible if you put them all together. For example, the Senate bill’s elimination of federal funding for Planned Parenthood, could prevent a woman from getting effective birth control, either because it closes or because she has Medicaid, which now won’t cover services she receives there. That woman might then end up pregnant unexpectedly. If she wanted to terminate the pregnancy she’d find that she couldn’t buy a plan that covers abortion. If she wanted to continue the pregnancy she (1) wouldn’t be able to find a private plan that offers maternity coverage; and (2) could find Medicaid won’t cover her, because her state tightened its income guidelines for covering pregnancies thanks to the Senate’s Medicaid funding cuts.

Republicans complain about inflammatory rhetoric when Democrats say that their health proposals amount to a “war on women.” However, as description of a bill that would eliminate funding for the largest women’s healthcare provider and increase maternal mortality, it’s starting to sound pretty accurate to us.

Next post: It has been a crazy, crazy week for the Senate health bill– here’s a quick recap

Previous post: Here’s how the Senate bill hurts older Americans (and a theory on why GOP senators are ok with that)