Warning: Use of undefined constant wp_cumulus_widget - assumed 'wp_cumulus_widget' (this will throw an Error in a future version of PHP) in /home/customer/www/whatifpost.com/public_html/wp-content/plugins/wp-cumulus/wp-cumulus.php on line 375
 The Medicaid expansion explained
≡ Menu 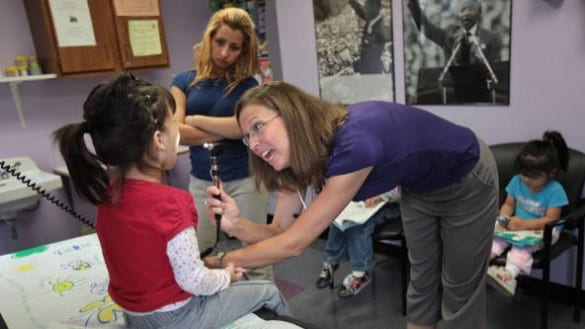 The Supreme Court’s health law ruling was full of surprises (the individual mandate upheld as a tax, John Roberts as the swing vote), but perhaps the biggest was the decision allowing the states to opt out of the Medicaid expansion. Matt Salo, who directs the National Association of Medicaid Directors, told the Washington Post, “We did not see that coming. I did manage to put together a short little statement, but this is not an option we had prepared for at all.”

This part of the ruling is a big deal. The Congressional Budget Office estimates that the Medicaid expansion will cover 17 million of the more than 32 million Americans expected to gain coverage thanks to the new law. If states choose to opt out– and a handful of states have already said they will– many of their poorest residents will be left without coverage.

Since it is so important (not to mention ridiculously complicated) we’ve put together an explainer on what the Court’s Medicaid decision means going forward.

How did the health law expand Medicaid?

Before the Affordable Care Act, states had to cover certain categories of poor people under Medicaid (pregnant women and the disabled, for example), but they had a lot of leeway in deciding who else was eligible.  The new law sets one income limit for every state, as The Washington Post’s Ezra Klein explains:

[Currently] Texas covers only working adults up to 26 percent of the poverty line. The poverty line for an individual is $11,170. So, you could be a single person making $4,000 a year and you can’t qualify for Medicaid. That’s part of the reason Texas has the highest uninsured rate in the nation.

Massachusetts, by contrast, covers working adults up to 133 percent of the poverty line — partly due to a former governor whose name rhymes with Schmit Schmomney. It’s a big reason it has the lowest uninsured rate in the nation.

The Affordable Care Act wants to make the whole country like Massachusetts. Everyone earning up to 133 percent of the poverty line, which is less than $15,000 for an individual, gets Medicaid.

To encourage states to participate in this expanded Medicaid program, the federal government offered a really good deal. The feds will cover 100 percent of costs for anyone who wasn’t eligible under a state’s old rules (whatever they were– remember it’s different for every state) that is now eligible under the new rule. Eventually that amount will phase down to 90% after 2020.

But in addition to that carrot, the new law contained a stick as well. If states don’t go along with the Medicaid expansion, they could risk losing ALL of their Medicaid funding from the federal government.

What did the Supreme Court say?

The states who sued the government argued that the “stick” is unfairly coercive, because states are totally dependent on Medicaid funding– leaving them no choice but to accept the new terms imposed by Congress. The Supreme Court agreed and took away the stick, saying that if states choose not to participate in the Medicaid expansion they can still get their previous Medicaid funds.

Which states will opt out of the Medicaid expansion?

As of now, five states (Florida, Texas, Louisiana, Mississippi, and South Carolina) have said they won’t participate in the expansion, while a handful of others have said that they’re leaning against it. On the other hand, some states, like Minnesota started expanding their Medicaid program early. You can see where your state stands here:

We should point out that even though some states say they won’t participate now, it seems likely that most (if not all) of them will eventually join in, for reasons we’ll see in a second.

What happens if a state does opt out?

If a state does opt out of the Medicaid expansion, many of its poorest residents will be left without any coverage, as Jared Bernstein, former economic adviser to Vice President Biden, explains:

“Because the law was written assuming that the uninsured poor would be covered by Medicaid, subsidies to purchase health insurance in the exchanges don’t kick in until higher income levels. The poor won’t have to pay the tax penalty formerly known as the mandate because of a hardship exemption in the law, but neither will they get the subsidy until their incomes go up enough.

It’s a very weird reversal of the usual means-test for government benefits. Typically, as your income rises you become ineligible for benefits. Here, you become eligible.”

Why would a state want to opt out then?

States that have decided to opt out say that they can’t afford to spend any more money on Medicaid.

Is the expansion really unaffordable for states?

Defenders of the law point out that since the federal government is picking up almost the entire tab for every new enrollee, it’s actually a fantastic deal for the states– especially for those that currently have stingy Medicaid programs. Here’s Ezra Klein again:

To get a sense of what an incredibly, astonishingly, unbelievably good deal that is, consider this: The federal government currently pays 57 percent of Medicaid’s costs. States pay the rest. And every state participates.

But, somewhat perversely, the states that get the best deal under the law are states like Texas, which have stingy Medicaid programs right now, and where the federal government is thus going to pick up the bill for insuring millions and millions of people. In states like Massachusetts, where the Medicaid program is already generous and the state is shouldering much of the cost, there’s no difference for the federal government to pay. 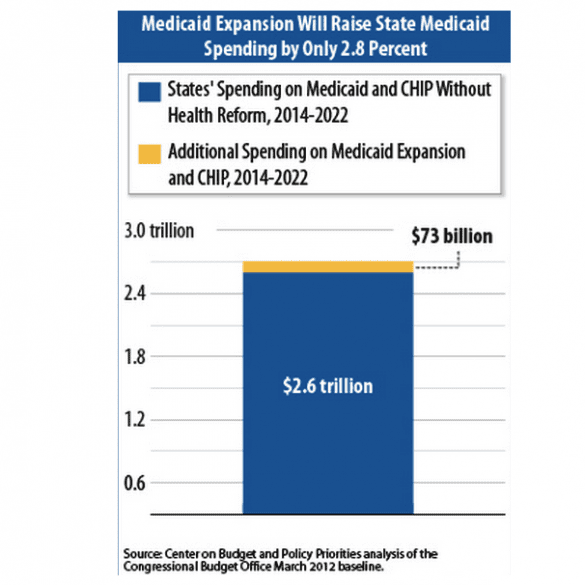 Some Republican governors point out that even with all this help from the federal government, states still be on the hook for billions in extra Medicaid spending. But many of these states have been using wildly inflated estimates of how much the expansion will actually cost.

Also, states claiming they don’t have enough money to pay their share of the expansion tend to have some of the most regressive tax policies in the country. For example, look at Iowa:

Republican governor Terry Branstad has claimed that the Medicaid expansion is “unaffordable, unsustainable.” But Iowa is one of three states that allow taxpayers to deduct 100 percent of their federal income tax payments from their state taxes. As the ITEP points out in its report, this unusual tax break overwhelmingly benefits the top 20 percent, who enjoy between 76 and 83 percent of the cuts. In 2011, Iowa lost about $642 million in potential revenue to this tax break—that’s almost 25 percent of its total tax revenue! Governor Branstad himself made out quite well under this tax break. In 2011, he paid just $52 in state income taxes because he was able to deduct his 2010 federal taxes from his 2011 state income tax bill.

What would expanding Medicaid to insure 115,000 residents cost Iowa between 2014 and 2019? Just $147 million. If folks like Governor Branstad paid their fair share of state income taxes, Iowa would raise almost $3.9 billion in those years. Or in other words, it could pay for the expansion more than twenty-six times over.

Other states have claimed that it’s not the cost of the expansion they’re worried about– it’s something called the “woodwork effect”: that expanding Medicaid will bring out of the woodwork millions of people who are already eligible for the program under current state rules, but aren’t already enrolled. The federal government is only paying 90% of the costs of newly eligible enrollees, but for those who would have been eligible under a state’s old rule, the feds will only pay the old rate: 57% of the cost on average.

This argument doesn’t make a ton of sense either– thanks to the individual mandate and state exchanges that will make it easier to enroll, these people will likely sign up for Medicaid regardless of whether or not the state expands the program.

There would be a reduction in uncompensated care —  the medical bills that don’t get paid — as more Arkansas residents gained coverage. State tax revenue would increase with the influx of federal dollars. The state also gets to transfer its medically needy population —  those who spend nearly all of their income on medical bills to qualify for Medicaid — into the federally financed expansion.

Starting in 2021, Arkansas will end up paying out more than it saves, but the total cost will only be about $3.2 million per year– extremely reasonable given that it will expand coverage to between 200,000 and 250,000 Arkansans.

If the Medicaid expansion is affordable, why are states really threatening to opt out?

Our guess is that it’s mostly political posturing. Most of the states who were quickest to opt out have Republican governors eyeing possible presidential runs. Ezra Klein explains:

In the short term, a rising Republican star like Haley [Barbour] might have reason to reject that deal. The Republican base hates the law, and so one way to build a national profile right now is to win the GOP’s ongoing “no, I’m the most anti-Obamacare!” contest.

But most states will probably join the Medicaid expansion eventually?

Right. In the long run, even anti-Obamacare Republican governors will likely go along– partly because they won’t want to miss out on the federal money, but also because there will be massive pressure from powerful health care providers within their states.

Right now hospitals get around $11.3 billion annually from the government to help cover the costs of treating patients without insurance. But the Affordable Care Act phases out these “Disproportionate Share” (DSH) payments– the thinking being that thanks to the new law nearly everyone will have coverage, so hospitals won’t need this money.

But as the Washington Post’s Sarah Kliff explains:

That was the thinking before the Supreme Court decision, at least. If a state opts out of the Medicaid expansion and does not extend coverage to those living below the poverty line, the math changes. The unpaid bills do not disappear, but the DSH dollars do. Barring an act of Congress, those supplemental funds will be largely phased out by 2020.

That’s a big deal for hospitals, who already spend about $39.3 billion a year on uncompensated care, which makes up 5.8 percent of all expenses. Add on another $11 billion and hospitals would find themselves spending 27 percent more covering unpaid bills. It especially matters in states with more uninsured residents. In Texas, for example, the hospitals received $957 million in DSH payments last year.

It’s easy for Republican governors to ignore Medicaid patients, who don’t have much money or power, but deep-pocketed health care giants who want to get paid are another thing. Hospitals and doctors haven’t made too much fuss yet, probably because they’re waiting to see what happens in the November elections. But you can bet they will be vocal as it gets closer to 2014… and politicians will take notice.

Next post: Surprise! Medicaid is better for your health than having no insurance

Previous post: Watch Mitt Romney defend the individual mandate (and do a pretty good job at it)