Warning: Use of undefined constant wp_cumulus_widget - assumed 'wp_cumulus_widget' (this will throw an Error in a future version of PHP) in /home/customer/www/whatifpost.com/public_html/wp-content/plugins/wp-cumulus/wp-cumulus.php on line 375
 The life expectancy argument: why Americans don’t live longer
≡ Menu 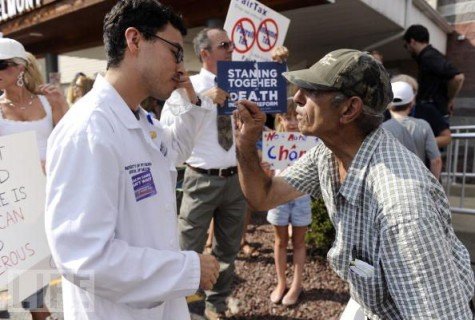 There are basically two ways to respond if you’re arguing with someone who thinks that the new health care reform law is a “government takeover of health care.”

#1– The first (and probably smarter) way to respond is simply, “No, it’s not.”  Government is just saying that insurance companies can’t deny coverage or charge more to people who are sick, and they have to spend a certain percentage of your premiums on actual care– that hardly makes us Canada.  Meanwhile, they’re going to be providing subsidies to help millions of Americans buy private insurance.  If the Democrats are socialists, they’re terrible at it.

But there’s something unsatisfying about that response– by making the point that the government really isn’t doing that much, in a way, it feels like you’re agreeing with the premise that any more government involvement in health care would be a bad thing.

#2– And so, there’s the second response: “More government involvement in health care would be a good thing.”

This leads to a debate that almost always plays out the same way.  You say, “In every other industrialized country the government plays a bigger role in health care.  In America, our health care costs twice as much per person, we see the doctor less often, and our life expectancy is lower than all of them.”  If you’re near a computer you can show them this graph.

If they know what they’re talking about they respond by saying something like, “Life expectancy doesn’t take into account other factors.  We have more obesity, more traffic fatalities, more murders, more smoking, etc.  America’s health care system isn’t to blame.”

It’s a fair point.  But according to a recent study by researchers at Columbia University, published in the journal Health Affairs… it’s also wrong.

Researchers compared the 15-year survival rates for men and women aged 45 and 65 in United States to Australia, Austria, Belgium, Britain, Canada, France, Germany, Italy, Japan, the Netherlands, Sweden and Switzerland.  (They didn’t look at life expectancy from birth, because in the past policy experts have complained that different countries have different criteria for what would be considered infant mortality.  What would be counted as infant death in the United States in other countries might be considered a miscarriage.)

They found that relative to these 12 other countries, which all provide universal health insurance, our  survival rates have fallen over the last 30 years.  But, according to Columbia’s Peter Muennig, who led the study:

“What really surprised us was that all of the usual suspects — smoking, obesity, traffic accidents, and homicides — are not the culprits.”

The Usual Suspects
Obesity. It’s true that we’re much heavier, on average, than the populations of other countries.  But there’s nothing new about that: 30 years ago US obesity rates were also much higher than anywhere else.  The researchers wrote:

“For obesity to explain the decline in U.S. life expectancy or the increase in health spending relative to the 12 comparison countries, Americans would have to be becoming obese at a faster rate than people in the comparison nations over time.”

But that’s not happening. Sure, we’re getting fatter, but other countries have been getting fatter at the same rates. Yet their survival rates improved compared to us, even though our health costs have been rising twice as fast.

Traffic deaths and murders. It’s true that Americans are more likely to die in car crashes or be murdered than residents of the other countries.  But, the researchers found that the share of deaths from these causes is very low and hasn’t changed much over the past 30 years.

Population diversity. Some have argued that the U.S. has lower life expectancies because we’re a more diverse country.  Minorities do tend to have worse health outcomes than non-hispanic whites, so the authors looked into 15-year survival rates for just non-hispanic white Americans. They found that compared to other countries, America was still at the bottom of the list.

So what’s the real culprit?
The researchers suggest a couple possible theories why the U.S. survival rate is so bad, and both have to do with our health care system.

1. Lack of Insurance
Whereas the other 12 countries in the study have moved towards universal health coverage, the U.S. has not (at least until the new law passed).  And so the authors say:

One explanation for the poor US performance is the relative increase in the number of uninsured people during much of the study period. People without health insurance have worse access to medical care, which may contribute to declining life expectancy.

The researchers think that rising US health spending itself might be responsible for the decline in US survival rates.  Why?

First, as health spending rises, so, too, does the number of people with inadequate health insurance. Employers drop coverage, individuals can’t afford to purchase it on their own.

Second: “rising health spending may be choking off public funding on more important life-saving programs.” In other words, because we’re spending such a big percentage of our national and state budgets on Medicaid and Medicare, other important programs are getting cut.  The authors suggest that

(By the way, these are the same programs that Republicans recently targeted to cut from the new health care law.)

Finally, the authors say that unregulated fee-for-service care (where doctors get paid for every procedure they do, instead of for how well they treat an illness) and an emphasis on specialty care may contribute to high US health spending, while leading to unneeded procedures and fragmentation of care.

Unneeded procedures may be associated with secondary complications. Fragmentation of care leads to poor communication between providers, sometimes conflicting instructions for patients, and higher rates of medical errors. For example, two separate physicians are probably more likely than a single primary care provider to prescribe two incompatible drugs to a single patient.

The new health reform bill begins to move away from fee-for-service– with pilot programs to test paying doctors and hospitals based on how well they coordinate care, instead of simply for every procedure they do.  There are also investments in research to improve the quality of care that Americans get.

If these reforms are successful, they could help improve America’s survival rates and life expectancy.  As the Columbia University researchers put it:

Meaningful reform may not only save money over the long term, it may also save lives.