Warning: Use of undefined constant wp_cumulus_widget - assumed 'wp_cumulus_widget' (this will throw an Error in a future version of PHP) in /home/customer/www/whatifpost.com/public_html/wp-content/plugins/wp-cumulus/wp-cumulus.php on line 375
 The dumb deficit ceiling debate
≡ Menu 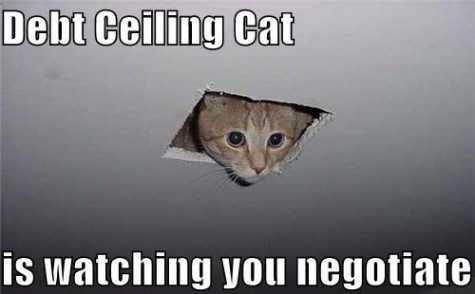 We haven’t talked much about the debt ceiling on What If Post for a couple reasons. For one, we assumed that Congress, rather than risk (another) economic meltdown, would come to its senses and raise the limit well before the deadline. Second, there’s no reason that the debt ceiling has to be directly linked to health care. Pretty much every other time we’ve bumped against the debt ceiling, Congress has raised it without setting conditions.

Well, it’s now July, well past the official deadline for raising the debt ceiling, and Senate Minority Leader Mitch McConnell (R-SC) is saying he won’t vote to raise it without major cuts to Medicare:

“To get my vote, for me, it’s going to take short term [cuts, via spending caps]… Both medium and long-term, entitlements.,” McConnell said. “Medicare will be part of the solution.”

To clarify, I asked “[I]f [the Biden group] comes up with big cuts, trillions of dollars worth of cuts, but without substantially addressing Medicare, it won’t get your vote?”

Wow. It’s an extraordinary statement from the top Republican in the Senate, but to understand just how crazy it is, you need to understand what the debt ceiling is and why Congress is arguing over it.

What is the debt ceiling?
The debt ceiling is the legal limit on how much the federal government can borrow. It’s been around since 1917 (before that Congress had to approve new borrowing each time it came up) and has been raised nearly 100 times since then. The current limit is $14.3 trillion.

We were supposed to hit the debt ceiling on May 16, but Treasury Secretary Geithner was able to authorize some “extraordinary measures” (mainly borrowing money from the pension fund for federal workers) to keep us going until August 2.

Why it’s crazy for Congress to be arguing over this
Glenn Hubbard, dean of Columbia University’s Graduate School of Business and former chief economist to George W. Bush has a good analogy:

“It’s not useful for me and my wife to argue over whether we’re going to pay our bills. What’s useful for us is to discuss whether we should work more or spend less. But not whether we’ll pay.”

Unfortunately that’s exactly what the debt ceiling argument is about– whether the government pays its bills. Both sides agree that the deficit has to be dealt with, but they have different plans for reducing it. That’s the argument over how to pay the bills. But Republicans have said that unless Democrats accept their demands for how to pay the bills (no tax increases, even for the very wealthy, massive spending cuts to Medicare and other programs) then they’ll keep us from paying any bills.

If the ceiling isn’t raised by August 2, the Treasury Department won’t have enough money coming in to pay all the country’s bills and won’t be authorized to borrow to make up the difference.

What happens then?
Nobody really knows— the United States has always raised the debt ceiling to keep paying our bills on time. But basically, there are two options, which conservative/libertarian blogger Megan McCardle lays out in The Atlantic:

If the GOP doesn’t cut a deal sometime pretty soon, we’re either going to default on our debt (hello, financial crisis, unemployment spike, substantial and immediate drop in GDP, followed by an angry mob of voters descending on their polling places with pitchforks), or we’re going to cut a bunch of programs that beneficiaries are very attached to. (Hello, angry mob of seniors descending on their representatives with machetes.)

Republicans in Congress seem to think that these fears are overblown. Of course the U.S. isn’t going to default they say– we have enough money coming in to keep making interest payments on our debt– and a temporary delay in paying for other federal programs isn’t that big a deal.  Democrats meanwhile have been warning that failing to raise the ceiling would be catastrophic.

On this, the Democrats are right. The Bipartisan Policy Center did an analysis of what will happen if we don’t raise the debt ceiling in time, and says that the result would be a chaotic, immediate halt to over 40% of all federal spending. Again, we wouldn’t have enough money to pay all the government’s bills, so the Treasury would have to prioritize who gets paid, and the results would be a mess:

Under a system of prioritization, to pick one illustration, Treasury could exhaust all inflows for the month of August by paying only six major items: interest on our existing debt, Medicare, Medicaid, Social Security, unemployment insurance and defense contracts.

Without cutting from these items, there would be no money to fund entire U.S. departments, such as Justice, Labor, and Commerce. There would also not be funds to pay for veterans’ benefits, IRS refunds, military active duty pay, federal salaries and benefits, special education programs, Pell Grants for college students or food and rent payments for the poor. “The choices would not be pretty,” said Visiting Scholar Jay Powell, a former Under Secretary of the Treasury for Finance under President George H. W. Bush.

And if that’s not bad enough, there are a bunch of other problems:

Oh and it still might cause an economic catastrophe. Even if the government is still paying off its debt, investors could start worrying that the US might default in the future. Investors will demand higher interest rates for US treasuries, which in addition to increasing the deficit, will have a ripple effect over the entire economy. Ezra Klein explains:

According to the BPC’s calculations, the federal government needs to roll over $500 billion of debt in August. If we’re in quasi-default, who will want to purchase that debt? What will they charge us when they do purchase that debt? A 10 percent premium would cost us $50 billion. A one percent premium would cost us $5 billion. And that’s only the direct cost. Because so many other kinds of debt benchmark against the rates the Treasury pays, you’ll see borrowing costs rising throughout the system. Mortgages, corporate borrowing, all of it. It won’t just be the federal government that pays. It’ll be the economy.

The bottom line
It’s insane for either party to threaten not to raise the debt limit if it doesn’t get its way in budget negotiations. In the past, both parties have tried to use votes over raising the debt ceiling to embarrass the other, since “raising the debt limit” sounds bad, even though it’s necessary. But in the end it was just empty political posturing. This year is different.

For example, between 2002 and 2008 House minority whip Eric Cantor cast five votes to raise the debt ceiling with no strings attached. This year, he’s refusing to raise it unless Democrats agree to massive cuts in spending and no new increases in revenues. Or, going back to Mitch McConnell’s statement, Washington Monthly’s Steve Brennan puts it well:

The Senate’s leading Republican is saying, publicly and on the record, that without Medicare cuts, he’ll try to create an economic calamity on purpose.

What makes this whole situation even crazier is that not only are they threatening to tank the economy, but they’re threatening to do it despite the fact that Democrats seem to be offering them a really good deal– what conservative columnist David Brooks is calling “the mother of all no-brainers.” Or at least from the Republicans’ perspective it’s a great deal– for the rest of us maybe not so much. We’ll have more on the budget deal Democrats are offering in an upcoming post.

Next post: New pollution rules for power plants will save 34,000 lives

Previous post: Round 1 in health reform appeals goes to Obama