Warning: Use of undefined constant wp_cumulus_widget - assumed 'wp_cumulus_widget' (this will throw an Error in a future version of PHP) in /home/customer/www/whatifpost.com/public_html/wp-content/plugins/wp-cumulus/wp-cumulus.php on line 375
 The Debt Ceiling Deal Explained: Part 1, What it does
≡ Menu

The Debt Ceiling Deal Explained: Part 1, What it does

With coverage of the eleventh hour agreement to raise the debt ceiling focused mainly on the ugly political process and the economic fallout, we thought it would be worth taking a closer look at what exactly is in the deal.

The New York Times has a great graphic explaining the deal, but here are the basics.

Why did Congress break the increase into three parts? Why not just raise the debt ceiling all at once (or better yet, get rid of it) to avoid another crisis down the road?

The answer: politics. This gradual increase was an idea from Republican Senator Mitch McConnell’s earlier plan. Politicians know that raising the debt ceiling sounds like a bad thing (no one likes debt), even though failing to raise it would wreck the economy… which leads to a weird political game. Typically the minority party will vote against the increase, knowing that the party in power will have to vote to raise it to avoid catastrophe. Both Democrats and Republicans have done this in the past.

Republicans in Congress weren’t ready to give up this stupid (and as we saw this year, dangerous) game, so this new debt limit gives them a way to vote against the debt ceiling without actually defeating it. The first $400 billion increase happens automatically to avoid immediate default, but Congress can vote to override the next two increases. Obama can then veto the overrides, which of course he will, because the alternative is economic disaster.

1. $917 billion in spending cuts over the next ten years: According to the White House $350 billion of those cuts will come from the defense budget. The rest, presumably, will come from discretionary spending.

2. Special Joint Committee. A 12-member House-Senate committee (some are calling it the Super-Congress) has until November to come up with at least $1.5 trillion in additional cuts or revenue. Their plan will go to Congress for an up or down vote by December 23. If their plan is not passed then the trigger goes into effect. 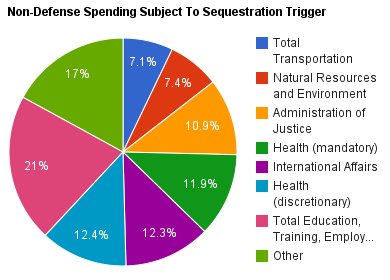 There’s almost no chance it will pass (it needs a two-thirds majority)– which is a good thing. Washington Post’s Ezra Klein calls this The Worst Idea in Washington. The proposed amendment goes far beyond requiring Congress to pass a balanced budget every year. It includes provisions saying that any tax increases would take a ⅔ majority in both houses, and total spending couldn’t exceed 18% of GDP. To put that figure in perspective, every budget passed under Ronald Reagan, every budget passed under George W. Bush, and even the extreme budget Paul Ryan proposed this year would be unconstitutional. Not only that, but as Klein points out:

The problem isn’t simply that the proposed amendment is extreme. It’s also unworkable. The baby boomers are retiring and health costs are rising. Unless you have a way to stop one or the other from happening — and no one does — spending as a percentage of GDP is going to have to rise. This proposal doesn’t interrupt those trends. It simply refuses to acknowledge them — or, to be more generous, it rules them unconstitutional. This is the equivalent of trying to keep your kid cute by passing a law saying he’s not allowed to grow up.

Again, the good news is that the amendment stands almost no chance of passing– it’s just another dumb political game that shows how extreme some current Republicans are.

That’s it for part 1. Check back tomorrow for part 2, when we look at what the deal means for health care and the rest of the economy.

Next post: The Debt Ceiling Deal Explained: Part 2, What it means