Warning: Use of undefined constant wp_cumulus_widget - assumed 'wp_cumulus_widget' (this will throw an Error in a future version of PHP) in /home/customer/www/whatifpost.com/public_html/wp-content/plugins/wp-cumulus/wp-cumulus.php on line 375
 The ACA was on track for its best year ever… until Trump took office
≡ Menu 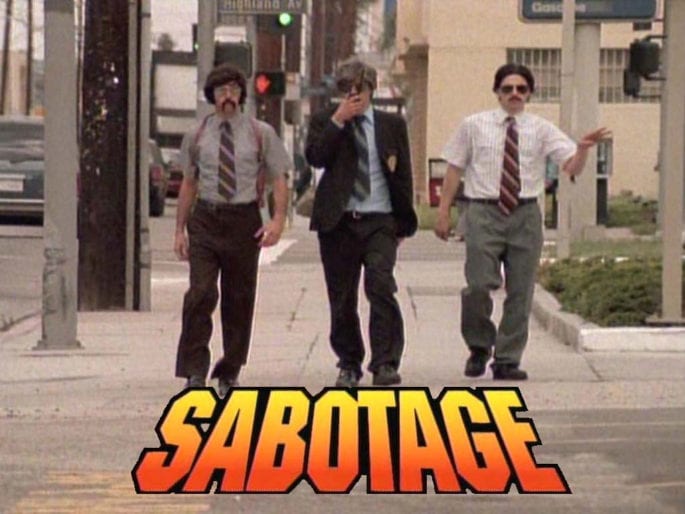 We’re back! Sorry, it’s been a minute– we’ve been busy with some other projects– but luckily there hasn’t been any big healthcare news over the past couple months, right?

Ok, so later this week we’ll take a look at the Obamacare replacement bill that House Republicans passed earlier this month (spoiler: it’s not great), but first we wanted to check in on where things stand with the Affordable Care Act itself. Because while the news is full of dumb things Trump has done lately, it’s what his administration hasn’t done that’s the most immediate threat to the ACA.

Things were looking good for Obamacare in 2018

Before House Republicans voted on AHCA, House Speaker Paul Ryan insisted that Obamacare was collapsing and called their bill “an act of mercy.” It was an odd thing to say about a bill that would lead 24 million fewer Americans having insurance and raise costs for the average enrollee by $1,542 per year in 2017, and by $2,409 in 2020.

He was also lying about the “Obamacare is collapsing” part. According to the latest projections from the Congressional Budget Office, enrollment in the Obamacare marketplaces was expected to increase slightly and then hold constant for the next decade: 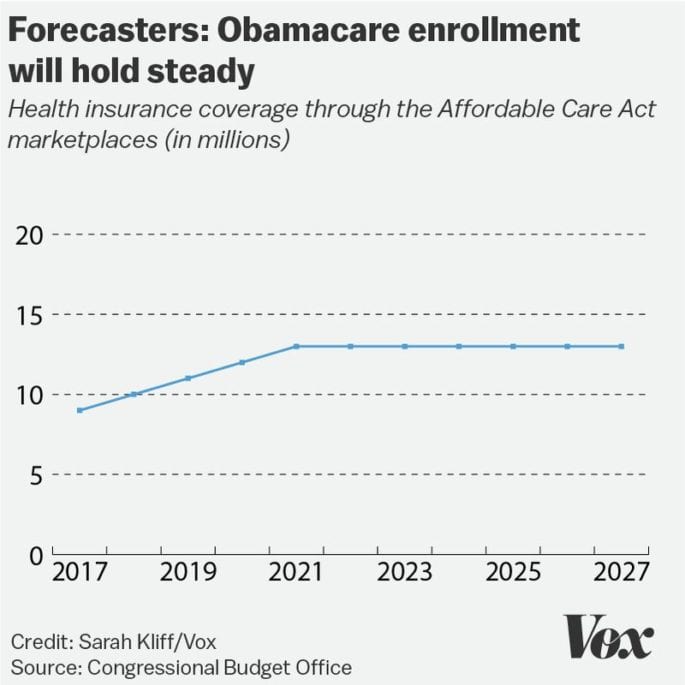 It’s true that the marketplaces were smaller than the CBO expected– when the law passed the CBO predicted about 26 million people would buy plans by 2017, and the actual total ended up being about half that. (They thought that more employers would drop coverage and send their workers onto Obamacare.) The marketplaces being smaller makes them a little less stable– more enrollees would mean more healthy people signing up, which attracts more insurers and lowers premiums– but the CBO report makes clear that they showed no signs of collapsing.

Opponents of Obamacare have tried pointing to the decision of insurance giants Humana and Aetna to pull out of ACA exchanges in 2018 as evidence of its eminent collapse. Aetna’s CEO claimed that the exchanges were in a “death spiral”: not enough healthy people were signing up for insurance compared to the number of sick people, causing his company to lose money. Turns out that wasn’t entirely true… The Department of Justice had recently blocked a merger between the two companies citing antitrust concerns, and when Aetna sued to overturn the ruling, a federal judge found that (1) Aetna’s CEO had written a letter to the DOJ threatening not to participate in Obamacare if the merger was blocked; (2) the company had decided to pull out of states where it was profitable (if the company technically wasn’t competing in those states, it could argue that the merger wouldn’t lower competition); and (3) prior to the proposed merger, the company had planned to expand its presence on the exchanges.

In fact, other insurers have said that the exchanges were starting to stabilize; as insurers got more experience selling coverage on the Obamacare marketplaces, they got better at pricing their plans. Andy Slavitt, who ran Medicare and Medicaid under President Obama, talked to five insurance company CEO’s— all of them said their 2017 Obamacare plans would at least break even, and several beat their projections. However, none of them could commit to participating in 2018, because of uncertainty from the White House.

Several of the plans beat their #ACA membership projections. 3

One plan said with all the work to be profitable in the #ACA (they hadn't been), ironic to question participation now. 5

Which brings us to three ways the Trump White House is destabilizing the Obamacare marketplaces simply by failing to do its job.

1. Not making a decision on cost-sharing reduction subsidies

Under Obamacare, there are two types of subsidies to help make plans more affordable for people with lower incomes: premium tax credits and cost sharing reductions. By now, you’ve probably heard about the premium tax credits, which help lower the cost of premiums based on your income.

The cost sharing reductions (CSR’s) get way less attention. If you make less than 250% of the poverty line (currently $29,700 for an individual), CSR’s can help reduce your out-of-pocket costs if you buy a silver level plan. So say the deductible on a silver plan is normally $2500– the CSR subsidy, which the government sends directly to insurers, could bring it down to $500, or possibly even less if your income is low enough. And as Bloomberg News reports, “About 7.1 million of the 12.2 million people who signed up for ACA plans for 2017 were eligible for the extra help.”

Back in 2014, House Republicans sued the Obama administration to block the CSR subsidies. They argued that while the Affordable Care Act created the CSR subsidies, in order for them to be paid out, Congress would have had to pass a separate appropriations bill. The lawsuit alleges that Congress never appropriated the money, and that therefore the CSR’s should stop being paid to insurers.

The federal government is currently paying insurers $7 billion for CSR’s each year. Under the law, even if those payments ended, insurers would still have to reduce cost-sharing for people who qualify. To keep from going bankrupt, they’d either have to (1) raise premiums to make up for that $7 billion in lost CSR’s or (2) just drop out of the market altogether.

Meanwhile, even though the Trump administration hasn’t made a decision on CSR’s, the uncertainty alone is driving up premiums for next year. Insurers have to file their proposed rates for 2018 over the next few weeks, and many will be pricing their plans as though the CSR’s will disappear, meaning that premiums will be 19% higher on average. Since the other subsidies– the ones to help pay premiums– are based on how much premiums cost, the government could pay $12.3 billion more in premium tax credits. At the end of the day, the government will pay $2.3 billion more than if it simply paid the CSR’s, and many consumers will pay higher premiums… if insurers don’t decide to leave the market altogether.

2. Weak enforcement of the individual mandate

If you know nothing else about the Affordable Care Act, you’ve at least heard that it includes a penalty for not having insurance coverage. However, on January 20th, the Trump administration issued a vaguely worded executive order instructing federal agencies to “waive, defer, grant exemptions from, or delay the implementation of any provision or requirement” that would impose a “cost, fee, tax, penalty, or regulatory burden” on individuals. Many people (us included) wondered whether that meant the Trump administration would stop enforcing the individual mandate.

In February the IRS took a step in that direction, telling tax preparers that it wouldn’t automatically reject returns in which the filer failed to state whether they had insurance last year. The Obama administration had instructed the IRS to reject these “silent returns” starting this year.

However, other than that one change, IRS enforcement of the individual mandate has continued much as it did under the Obamacare administration. Unfortunately that’s not great news either.

Under Obama, enforcement of the individual mandate was light: the IRS typically didn’t follow up on warning letters sent to those who didn’t report their coverage status or pay their fine. This weak enforcement was okay in the early years of the Affordable Care Act, while people were still getting used to the new law, but now it could become a problem. If the individual mandate doesn’t incentivize healthy people to purchase coverage, the sicker risk pools will mean higher premiums and less stable insurance markets.

We’ll let Louise Norris of healthinsurance.org explain this one:

“Trump was inaugurated 11 days before the end of the 2017 open enrollment period. And in the final week of open enrollment, the federal government scaled back advertising and outreach for HealthCare.gov, including pulling some ads for which payment had already been made. The result? Enrollment declined year-over-year in HealthCare.gov states, but grew in states that run their own enrollment platforms. This is particularly troubling for the stability of the insurance pools, because the last-minute stragglers who sign up at the end of open enrollment tend to be young, healthy people – exactly the people who are needed in the risk pool to keep it stable.”

In 2017, the Trump administration only had 11 days to scale back Obamacare outreach; in 2018, they’ll have more time to do less, and many more people could be left without coverage.

So to recap: Obamacare was not collapsing when President Trump took office. It had its problems– premiums and out-of-pocket for some enrollees were still too high, and some rural areas had too few insurance carriers participating– but these were far from fatal. However, rather than fix these problems, the Trump administration, seems to be set on making them much worse.

Next post: An insurer in North Carolina shows just how much the GOP’s lawsuit is jacking up premiums for their customers