Warning: Use of undefined constant wp_cumulus_widget - assumed 'wp_cumulus_widget' (this will throw an Error in a future version of PHP) in /home/customer/www/whatifpost.com/public_html/wp-content/plugins/wp-cumulus/wp-cumulus.php on line 375
 Supreme Court won’t rule on health reform… yet
≡ Menu 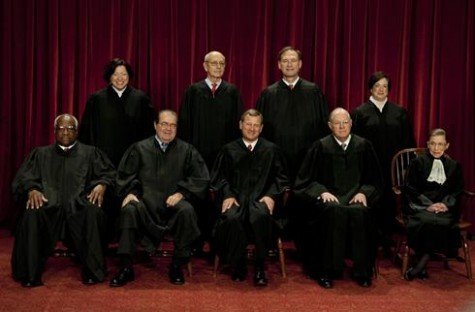 Last Monday, the Supreme Court turned down Virginia’s request for an immediate ruling on the constitutionality of health reform. The decision is unsurprising- the justices rarely skip over the lower courts, and so the challenges to health reform will continue through the normal appeals process. Hearings are scheduled for next month in the U.S. Court of Appeals for the 4th Circuit in Richmond, and two other appellate courts will address the issue in June.

Depending on how fast the appeals courts rule, this issue could end up before the Supreme Court by next year. On the other hand, many people believe that it won’t take up the case until 2013, because the justices won’t want to be seen as having an effect on the presidential election, by ruling on such a sensitive political issue.  And according to Maggie Mahar, author of Money Driven Medicine, after talking to a number of health care policy experts:

By then, not only the government but the private sector will have invested so much money in moving away from fee-for-service care, redesigning insurance so that it will meet the new standards, offering insurance to the employees of small companies, and changing how care is delivered (as leading  medical centers turn themselves into Accountable Care Organizations and physicians collaborate to create medical homes), that reform will have become all but inevitable.

One side note- most news stories pointed out that there was no indication that Justice Elena Kagan recused herself in the Supreme Court’s decision not to hear the case. Before her appointment to the Court, Kagan served as the White House’s Solicitor General (in other words, their lawyer), and conservatives have suggested there is a conflict of interest, even though Kagan and the White House say that she never worked on the Affordable Care Act. What the news stories didn’t mention is Justice Clarence Thomas’s apparent conflict of interest— his wife was paid hundreds of thousands of dollars to lobby for groups working to overturn healthcare reform. He also didn’t appear to recuse himself.

For more on the legal challenges to health reform, check out our coverage on the earlier rulings here and here.