Warning: Use of undefined constant wp_cumulus_widget - assumed 'wp_cumulus_widget' (this will throw an Error in a future version of PHP) in /home/customer/www/whatifpost.com/public_html/wp-content/plugins/wp-cumulus/wp-cumulus.php on line 375
 Some big employers are trying to avoid providing health benefits under Obamacare- can they get away with it?
≡ Menu

Some big employers are trying to avoid providing health benefits under Obamacare- can they get away with it? 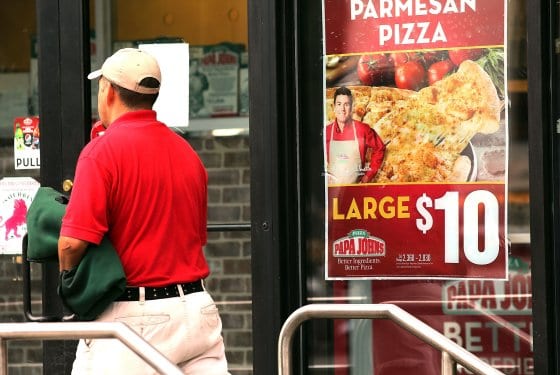 Some companies, like Papa John’s, have said they’ll cut back employee hours in response to Obamacare.

There are plenty of great things in the Affordable Care Act for workers who don’t get health benefits from their employers: the ability to get coverage without worrying about pre-existing conditions, an exchange where they can easily shop for plans, subsidies to help pay for premiums… the list goes on.

However, for some hourly workers it’s not all good news. One provision in the new law says that employers with more than 50 full-time equivalent workers (more on “equivalent” in a sec) have to provide coverage to full time workers or pay a tax penalty. It’s supposed to give employers an incentive to provide health benefits– and put employers who do provide benefits on a more level playing field– but some businesses have responded by threatening to cut workers’ hours or hire temps instead. In this post, we explain the employer “shared responsibility” penalty, and how hourly workers may be able to protect themselves.

Which employers would pay the penalty?

What is the penalty?

Kaiser Family Foundation has a great chart showing what the annual penalties would be for various employers, but in a nutshell it’s this:

Keep in mind that employers only pay the penalty for actual full-time employees though, and not full-time equivalents– something that’s important as we look at how employers try to game the system.

How employers are trying to get around the penalty

Number 1: Stay small (at least technically). Since employers only pay the penalty if they have more than 50 full-time equivalent employees, some are turning to temp agencies. Temps are technically employees of the temp agency, so they don’t count towards an employer’s size when it’s time to determine whether it’ll be hit by the penalty or not.

Many temp agencies are giant companies, with many more than 50 employees, and so they should also have to offer coverage to full-time employees. In theory then, there wouldn’t be much of an incentive for companies to rely on temps– the temp agency would simply pass along the cost of the temp workers healthcare to the company that contracts them. However, complex rules developed by the IRS could allow some full-time temp jobs to come without health benefits, as the Washington Post reports:

In regulations issued last year, the IRS left an opening for employers of “variable-hour” labor such as temp agencies. If it’s not clear upon hiring that an employee will consistently work more than 30 hours weekly, companies get up to 12 months to determine whether the person is full time and qualifies for health benefits — even if the employee does end up working full time. Few temps last 12 months.

In other words employers can get a full-time employee for a year without having to pay for coverage or a penalty.

Number 2: Cut employee hours. Remember that employers who don’t provide health insurance only pay the penalty for full-time employees, which again, is defined in the new law as anyone working more than 30 hours a week. It’s a huge incentive to cut hours back, and a number of employers have already started.

There are a couple different ways workers might be able to protect themselves if their employer starts cutting back hours to avoid its responsibilities under Obamacare. For one, cutting hours might violate section 510 of the Employee Retirement Income Security Act (ERISA), which prohibits organizations from making employment decisions specifically to prevent an employee from obtaining or keeping benefits coverage. It was originally intended to prevent employers from taking action to deny workers their retirement benefits– for example, firing workers when they turn 64 so they’re not eligible to collect their company pensions when they retire at 65– but it also covers health benefits.

“If you plan to reduce the hours of an employee who regularly works 40 hours a week to 29 hours or less per week, then you have to ask yourself whether these employees had a right to healthcare benefits under the previous arrangement. If the employee can prove you did this to avoid the ACA requirements and penalties, it could be a section 510 violation.”

Another defense for hourly employees is a whistleblower statute in the Affordable Care Act that prevents employers from retaliating against employees who receive subsidized coverage on the exchanges. An employee who believes that she has been fired or otherwise discriminated against because they would have been eligible for subsidies (and therefore, the employer would have had to pay a penalty) has 180 days to file a complaint with the government’s Occupational Safety and Health Administration (OSHA). If the employee can make a case that avoiding the new law’s employer penalty was a “contributing factor” in their hours being cut (or any other retaliation), OSHA will investigate. And as Napoli warned employers, the penalty for this type of violation could be especially severe, since a victorious employee could collect damages for pain and suffering, in addition to other costs.

That italicized “might” in the heading for this section is important though. Since the Affordable Care Act is brand new, it’s impossible to tell how courts will respond to workers’ legal challenges until someone actually does it. Courts could choose to interpret the ERISA and whistleblower protections very narrowly, making it harder for employees to challenge if an employer tries to get out of providing health benefits.

In addition to legal challenges, public opinion could help protect some hourly workers. When Darden Restaurants, Inc., the parent company of Olive Garden and Red Lobster, announced it would cut back workers hours to avoid having to provide benefits, there was a huge backlash, that contributed to a big drop in profits for the company, and Darden backpedaled on its plans.