Warning: Use of undefined constant wp_cumulus_widget - assumed 'wp_cumulus_widget' (this will throw an Error in a future version of PHP) in /home/customer/www/whatifpost.com/public_html/wp-content/plugins/wp-cumulus/wp-cumulus.php on line 375
 Republicans are coming around to part of Obamacare– but not the part you’d expect
≡ Menu 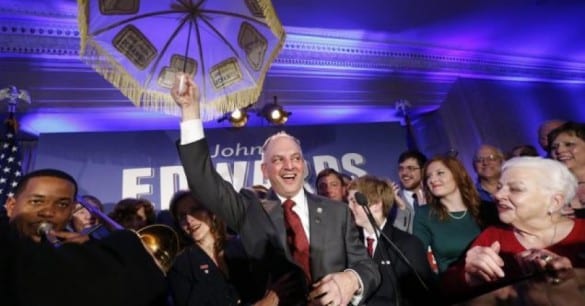 If you really think about it, the politics surrounding the Affordable Care Act have always been weird. The ACA was modeled on Massachusetts’ health reform, which was signed into law by future Republican presidential candidate Mitt Romney and supported by conservative think tanks like the Heritage Foundation. It’s also very similar to a plan proposed by Republican senators as an alternative to President Clinton’s health reform efforts in the early ‘90’s. So in theory, Republicans should have had no problem with Obamacare. Instead, Romney, the Heritage Foundation, and every other Republican in Congress came out against it.

But lately the politics of the ACA have gotten even stranger.

There are basically two parts to Obamacare’s coverage expansion: (1) Medicaid for those with incomes below 138% of the federal poverty line, and (2) exchanges where anyone who isn’t covered by an employer or government program like Medicare can purchase private insurance. Of the two parts, you’d think that Republicans would want to see more people enrolled in private insurance and fewer people enrolled in a big government health plan like Medicaid.

Yet, over the past month, we’ve seen Republicans across the country push to expand Medicaid, while their colleagues in Congress work to blow up the ACA’s private insurance expansion.

Over the past month, governors of some very red states have taken steps toward expanding Medicaid; Kentucky’s governor elect, who originally wanted to undo expansion, may be changing his mind; and in Congress, some GOP senators have talked about leaving the Medicaid expansion in place, even as they try to repeal the rest of the Affordable Care Act.

Louisiana: The state just elected John Bel Edwards, a Democrat, to replace outgoing Republican governor Bobby Jindal. Edwards calls Medicaid expansion “among the highest priorities” of his administration. He may be able to expand the program on the first day of his administration– if he does, Mother Jones points out that it would “provide coverage to 225,000 residents in one of the poorest states in the nation.” [For more info, this article does a good job explaining how Louisiana’s Medicaid expansion is moving forward.]

Georgia: The Atlanta Journal Constitution reports that the former health policy adviser and former spokesperson of Republican governor Nathan Deal are involved in an effort by the Georgia Chamber of Commerce to find a “Georgia-specific solution that fits within the federal framework.” The two former staffers are quick to point out that they’re acting independently of their old boss; also, even Deal were on board, the Republican-controlled legislature will have to pass it. Still the AJC calls his former staffers’ involvement in the Georgia Chamber effort one of “the first signs of a negotiated truce” on Medicaid expansion.

Bentley’s office pointed out that this is no different than what he told state legislators a year ago: that he would like to pursue Medicaid expansion with a private insurance element, similar to what Arkansas did. Still, his recent comments were seen by many as desire to crack the door on Medicaid expansion– a door that up until last year he had “closed, locked and barred.” And as The New Republic has pointed out, this is in the reddest of red states, where Democrats hold no statewide offices.

Wyoming: Governor Matt Mead, a Republican who previously opposed the Medicaid expansion, is now recommending the state opt in— in part because it costs the state more not to expand. Up to 17,000 uninsured residents (Wyomingans? Wyomingers?) could gain coverage. However he’ll have to convince a Republican-controlled legislature that has rejected expansion in its past three sessions.

South Dakota: This is another state that could save money by opting into the expansion. South Dakota has a large Native American population, and when they receive care outside of Indian Health Service facilities, the state pays for part of it. Republican governor Dennis Daugaard is hoping that the federal government would let the state use federal Medicaid expansion money to cover these costs. But he’s also argued, correctly, that expansion would help working families:

“We have to remember the single parent with three children. Between work and child care, a parent in that situation sometimes can’t work enough hours to get insurance.”

As many as 55,000 uninsured South Dakotans could get coverage if the state expands.

Kentucky: Under Democratic governor Steve Beshear, Kentucky was one of the first red states to expand Medicaid, and it was wildly successful: 530,000 people gained coverage. In November, the state elected a Republican, Matt Bevin, to succeed Beshear. Early in the campaign, Bevin said that he’d repeal expansion, but he’s softened his stance considerably since then. More recently he said he wants to prevent new enrollment (something the federal government would almost certainly block) and make changes to the program, like requiring people to pay a small premium (something the feds could conceivably approve).

Since the election, Bevin has been quiet about his exact plans for Medicaid, but it is telling that Republican senators in the state legislature say they don’t plan to block funding that would allow the state’s Medicaid expansion to continue. So maybe the Medicaid expansion will stand in Kentucky after all.

U.S. Congress: Republicans recently managed to get both houses of Congress to pass Obamacare repeal bills for the first time, using a procedural motion that Democrats in the Senate couldn’t filibuster). However, in talks leading up to the bill’s passage, there was a debate among Republicans about how much of the law to repeal. The issue? A number of Republican senators balked at repealing the Medicaid expansion.

While Republicans debated whether to keep the Medicaid expansion, there were no reports of any qualms about repealing the the exchanges and subsidies– which, remember, is the part of the law expanding private insurance coverage.

Meanwhile, presidential candidate Marco Rubio is taking credit for some recent bad news coming out of the exchanges, pointing to his efforts to undermine the law by going after an obscure provision known as risk corridors.

Rubio called the risk corridor program an insurance company bailout, but as we explained two years ago, it’s really just acts as training wheels for insurers as they get used to the new system. The Incidental Economist’s Nicholas Bagley has a great explanation of what the risk corridor actually did, and how Rubio threw a wrench in it:

To entice health plans to participate on the new exchanges, the ACA created a temporary program designed to buffer health plans against unanticipated losses in 2014, 2015, and 2016. Plans that made more than they anticipated would give some of that excess profit to the federal government. By the same token, the government would return some money to plans that got hammered.

The Obama administration soon came to recognize that the risk corridor program contained a serious flaw: the ACA didn’t appropriate any money to fund it. To sidestep that problem, administration lawyers devised a legal theory that allowed HHS to use the money it received from profitable plans to make payments to unprofitable plans.

But what happens if the program doesn’t take in enough money to cover its obligations? At Rubio’s insistence, Congress in 2014 passed a budget bill prohibiting the administration from using other funding streams—the budgetary equivalent of looking under the couch cushions for change—to make up for any shortfall.

And so, the White House announced earlier this year that it would be paying insurers just 13% of the money they expected, because, well, that’s all the money it had available.

Rubio is bragging that his move “killed” Obamacare, which is ridiculous. For one thing, as Bagley points out, insurers can probably just sue the government to get the money they’re owed. And in any case, most big insurers have big cash reserves and can weather short term losses, so they’ll be fine.

However Rubio’s move has been a disaster for smaller insurers on the exchanges who needed that money now to stay afloat. (That’s a big reason you might have seen stories about a number of Obamacare’s co-ops shutting down.) In other words, as Balloon Juice’s Richard Mayhew explains, really all Rubio did was make insurance markets less competitive, which will likely end up costing the government a lot more money than the $2.5 billion he says his amendment saved.

So to recap: a leading Republican presidential candidate is bragging about putting private insurers out of business, while at the same time other Republican senators talk about protecting Medicaid. Weird, right?

Here’s what we take away from all of this. One, is it’s just more evidence that Republicans’ united opposition to Obamacare was political, not ideological. Medicaid expansion is providing real benefits to states that opt in, and now a majority of Republican voters have favorable views of expansion; meanwhile recent news from the exchanges has been less positive. So we’re seeing some Republicans embrace Medicaid expansion, while they remain united against the private insurance exchanges– even though that’s a little backward from the principles they say their party supports. Still, we see it as a good sign that an increasing number of GOP politicians are taking a more pragmatic approach to Obamacare.

The other lesson is that while the ACA doesn’t need Republican support to work, it could work much better if they weren’t trying to destroy it. Millions more people would have coverage if every state opted into Medicaid, and there are plenty of tweaks that Congress could pass to make the exchanges run more smoothly. In embracing Medicaid expansion, Republicans have already taken some steps toward Obamacare– here’s hoping they take a few more.