Warning: Use of undefined constant wp_cumulus_widget - assumed 'wp_cumulus_widget' (this will throw an Error in a future version of PHP) in /home/customer/www/whatifpost.com/public_html/wp-content/plugins/wp-cumulus/wp-cumulus.php on line 375
 Procrastinator’s guide to getting covered in 2018
≡ Menu

Procrastinator’s guide to getting covered in 2018 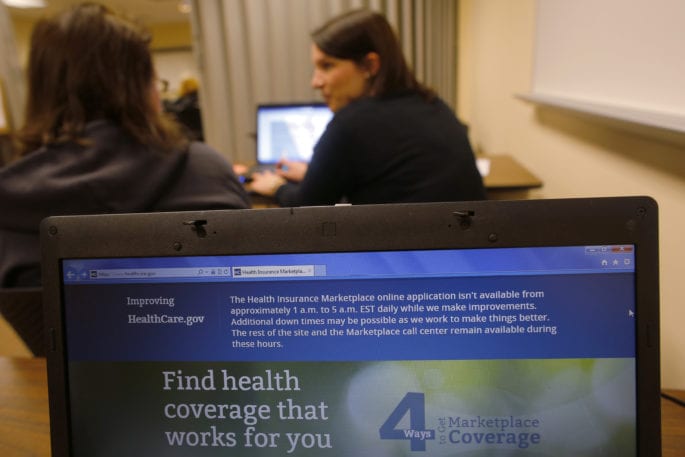 It’s been a bumpy road for the Affordable Care Act in 2017, but the law is still standing: Republicans’ efforts to “repeal and replace” it fell apart over the summer, and the recent election of Senator Doug Jones in Alabama, means that they’re unlikely to try again in 2018.

With repeal off the table, the Trump administration instead seems set on doing everything in it’s power to make the law work less well. Perhaps as part of that effort they drastically shortened the open enrollment period where anyone can sign up for Obamacare. Last year, you had until January 31 to sign up for a 2017 plan; this year, TODAY (Dec. 15) is the last day to buy a plan for 2018 in most states.

However, as long as you’re “in line” (that is, in the process of trying to buy a plan) by midnight tonight you can still get coverage. Also, a number of states have extended their deadlines, so even if you’re reading this after December 15, it’s still worth logging onto healthcare.gov to check. Plus if your income is low enough you and your family might qualify for Medicaid, and you can enroll in that an any time.

And for those of you in a rush to pick a plan before the deadline, here’s a bunch of helpful information to help you make it through quickly!

Important stuff to know for 2018 enrollment

Deadlines: Open enrollment only lasted for a month and a half this year– from November 1 to December 15. However, a few things to keep in mind:

Income guidelines: The cutoffs for Medicaid and subsidies to help pay for premiums are both based on the federal poverty level (FPL), which is a little higher this year than it was last year. (For example, last year the FPL for a single adult was $11,880– for 2018 coverage it’s $12,060.)  You can see the new guidelines in this chart: 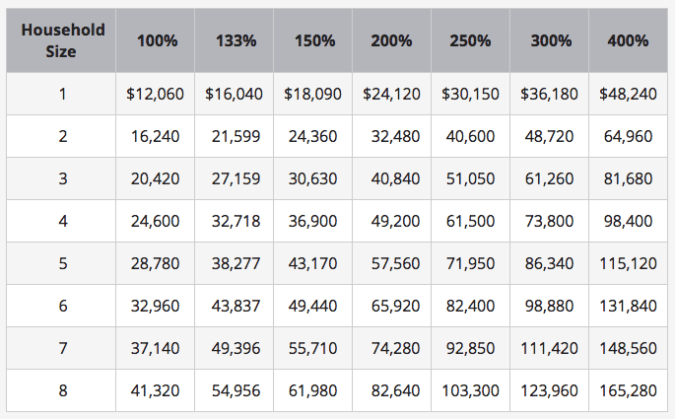 The penalty for not having coverage: For the first couple of years after Obamacare took effect, the individual mandate was phased in slowly, giving people a chance to get used to the new system. This year though, like the past couple years, the individual mandate is in full effect. The penalty for going without coverage in 2017 is $695 per adult (and $347.50 per child), up to a maximum of $2,085 per household; or 2% of your household’s income– whichever is greater. You’d pay that amount on your 2018 taxes.

Also, yes, Republicans in Congress have been talking about repealing the individual mandate as part of their tax reform plan. However, even if they do manage to pass a bill that eliminates the mandate, it wouldn’t take effect until 2019, which means that if you’re not covered this year, you’ll still owe.

Why you should NOT just auto-renew your Obamacare plan: If you already have coverage through the Obamacare exchanges and don’t do anything, you’ll automatically be enrolled in your current plan. As we’ve explained in the past, auto-renewing has always been a bad idea. For starters, the details of your plan might have changed– and as this tool from ProPublica illustrates (it’s from 2015, but the principle will be the same this year), sometimes the difference can be dramatic:

However, this year, because the Trump administration decided to stop paying the ACA’s cost-sharing reduction (CSR) subsidies, the cost of many plans will be wildly different this year. Under the ACA, people making less than 250% of the federal poverty line are eligible for CSR subsidies that help make their deductibles and other out-of-pocket costs much more affordable.

Even though Trump decided to stop paying the CSR’s, under the law insurers are still obligated to provide them to consumers who qualify, which means they’ve had to increase the cost of premiums for Silver plans dramatically. The subsidies that make your premiums more affordable are tied to the cost of Silver plans, so the change means your subsidy could be pretty different as well. Different states have reacted differently to the changes, so you definitely want to log back onto your state’s marketplace to see what’s different and if it makes sense to find another plan.

By the way, if you don’t log back onto the Obamacare marketplace to ask for a redetermination of your subsidy, it will automatically apply the subsidy you got last year– even though it’s probably wrong– and if it’s too large, you’ll have to pay some of it back when you file your 2018 taxes. Also, you may find that another plan is much cheaper this year– so it pays to shop around.

The OTHER Obamacare subsidy hardly anyone knows about: Most people have probably heard that there are subsidies to help pay for premiums based on income. What you might not know is that if you make less than 250% of the FPL (see the FPL chart above) you also qualify for reduced out-of-pocket costs– but only if you buy a silver-level plan. This is the CSR thing we mentioned above, and like we said insurers still have to offer these reductions, even though the Trump administration pulled their funding.

Kaiser Family Foundation has a pretty great FAQ page if you have any questions that aren’t answered in the posts above and a a few important tips to keep in mind if you’re thinking about signing up. Families USA has a fantastic guide for what to do after you sign up to make sure you get the most out of your new coverage. They also have tons of other easy-to-understand guides on how to apply for health coverage, get financial assistance, choosing a health plan, and more. And finally, we’re always up for answering your Obamacare questions on our Facebook page– leave your questions there or in the comments below and we’ll do our best to answer ASAP!

Previous post: What’s next for the GOP on healthcare? They basically have two choices.