Warning: Use of undefined constant wp_cumulus_widget - assumed 'wp_cumulus_widget' (this will throw an Error in a future version of PHP) in /home/customer/www/whatifpost.com/public_html/wp-content/plugins/wp-cumulus/wp-cumulus.php on line 375
 Polls, polls, and more polls on Paul Ryan’s plan
≡ Menu

Last month, Republican House Budget Chairman Paul Ryan and President Obama both released outlines of their budget proposals for next year (we’ll have more on both plans in upcoming posts).

So what does the public think? A recent Gallup poll shows Americans evenly split, with 44% preferring the Democrats’ overall deficit reduction plan, and 43% saying they prefer Ryan’s. But looking specifically at the approach to health care, there is less support for Ryan’s plan (turning Medicare into a voucher system), especially when people are given the details about it.  Ezra Klen explains:

You know what’s not popular? Reforming Medicare such that beneficiaries “receive a check or voucher from the government each year for a fixed amount they can use to shop for their own private health insurance policy.” According to a new Washington Post-ABC News poll, 65 percent of Americans oppose the idea — about the same number who dismissed it in 1995. And if they’re told that the cost of private insurance for seniors is projected to outpace the cost of Medicare insurance for seniors — which is exactly what CBO projects — more than 80 percent of Americans oppose the plan.

Another poll by the nonpartisan Kaiser foundation found an even split:

The biggest opposition in that poll, though, came from seniors:

And again, once people were told the details of Ryan’s plan, people who had been in favor of changing Medicare changed their mind (PDF):

We should point out that when people who were originally against changes to Medicare heard counter-arguments, many of these folk changed their mind as well. The difference though, is that there was little evidence to support the statements that respondents were given in favor of Medicare vouchers, while the arguments against were accurate.

A more recent poll shows even more opposition to changing Medicare, with 75% of the public against it. Even when people were told that Medicare makes up a large part of the federal budget, 70% were still against changing it.

“So much for the idea that if the public only understood the budget numbers they would be much more amenable to reductions,” said Peter Brown, assistant director of polling at the Quinnipiac University Polling Institute. “Except for defense spending.”

Meanwhile in other polling news, Kaiser’s monthly tracking poll on attitudes towards health reform still finds the public evenly split: 41% in favor, 41% against. 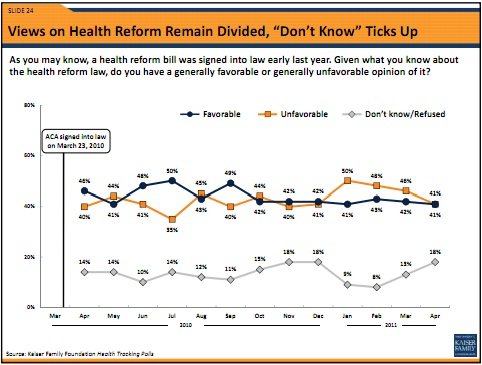 Next post: Another week, another vote (or two) to defund health reform