Warning: Use of undefined constant wp_cumulus_widget - assumed 'wp_cumulus_widget' (this will throw an Error in a future version of PHP) in /home/customer/www/whatifpost.com/public_html/wp-content/plugins/wp-cumulus/wp-cumulus.php on line 375
 PolitiFact’s Opinion of the Year
≡ Menu

PolitiFact’s Opinion of the Year 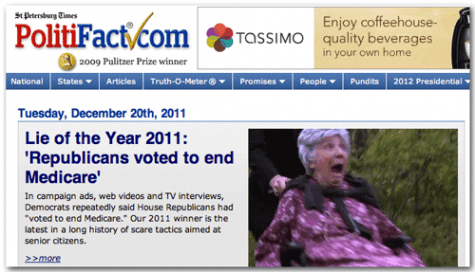 PolitiFact calls it a lie, but is it really?

It’s that time of year again: the independent fact-checking site PolitiFact has chosen it’s third annual “Lie of the Year,” and once again it’s about healthcare. Here’s the timeline:

This year’s is an odd choice though, for a simple reason– it’s not really a lie.

We covered Paul Ryan’s Medicare plan in depth, back when House Republicans voted for it, but here are the basics:

What this could mean for tomorrow’s seniors? The New Republic’s Jonathan Cohn answers:

One likely consequence is that insurers would begin offering cheaper, but skimpier, benefit plans: Seniors might still be “insured” but they would no longer have comprehensive benefits. Many would simply not be able to pay for their medical care, much as seniors did routinely before 1965, when Medicare came into existence.

So does it “end Medicare?” Well it depends how you define Medicare. Many liberals, (like Paul Krugman, Washington Monthly’s Steve Benen, and Jonathan Cohn) say Medicare refers to a single-payer program for seniors, one that wouldn’t exist under Ryan’s plan. Says Benen:

“It seems foolish to have to parse the meaning of the word ‘end,’ but if there’s a program, and it’s replaced with a different program, proponents brought an end to the original program. That’s what the verb means.”

Republicans, though, are using the term Medicare to refer to any program where the government helps seniors pay for care. Giving seniors vouchers for private insurance falls under that definition.

We would argue something in the middle. We could see how someone might hear “Republicans are ending Medicare” and think that there seniors are totally on their own to get coverage. Still Ryan’s plan represents at the very least a massive change in the structure of Medicare, one that shifts more of the burden of paying for care onto seniors. The phrase “end Medicare as we know it” seems to capture this distinction pretty well.

In any case, whether or not Republicans voted to “end Medicare” is clearly a matter of opinion. New York Magazine’s Jonathan Chait explains:

At some point, a change is dramatic enough that it is clearly ending the program. If you proposed to replace Medicare with a plan to give everybody two free aspirin on their 65th birthday, I would hope Politfact would concede that this would be “ending Medicare,” even if you call the free aspirin “Medicare.” On the other hand, small tweaks could not accurately be called “ending Medicare.” Between those two extremes, you have gray areas where you can’t really say with certainty whether a change is radical enough to constitute ending Medicare.

When fact-checking sites start picking sides on controversial issues like this, it undermines their credibility. For example, the super conservative Weekly Standard’s Mark Hemmingway cites a number of examples of fact-checkers labeling GOP candidates’ opinions as false, and he has a point. Of course, he believes that these examples show fact-checking is the “liberal media’s latest attempt to control the discourse,” but the truth is fact-checkers have given the same treatment to liberal opinions– the “ending Medicare” claim being a prime example.

The likely result is that these outlets will be listened to when one side or the other finds it convenient and ignored otherwise. Rather than policing the political discourse, they’ll just become one more bludgeon within it.

Fact-checking sites have provided a useful role as referees in political debates. But like any good umpire, if they’re going to keep their credibility (and keep from getting their tires slashed in the parking lot after the game) they need to avoid weighing in on behalf of either side.

Previous post: New air pollution rule! How it will effect your health