Warning: Use of undefined constant wp_cumulus_widget - assumed 'wp_cumulus_widget' (this will throw an Error in a future version of PHP) in /home/customer/www/whatifpost.com/public_html/wp-content/plugins/wp-cumulus/wp-cumulus.php on line 375
 Pennsylvania’s new governor takes first steps in transition to full Medicaid expansion
≡ Menu 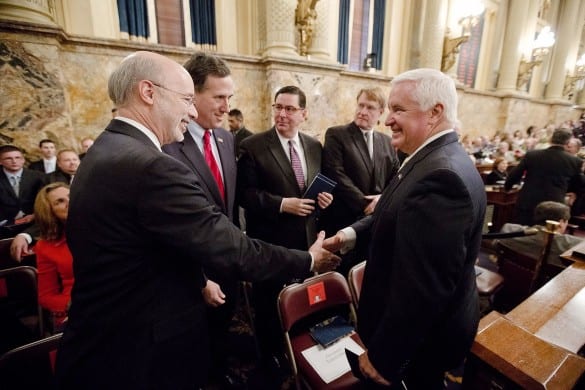 There was big health care news in Pennsylvania this week: as promised, newly elected Democratic governor Tom Wolf has announced the first steps in transitioning the state away from his predecessor’s Healthy PA plan to full Medicaid expansion under Obamacare.

What is Healthy PA?

Under the Affordable Care Act, starting last year anyone making less than 138% of the federal poverty line (currently that’s $16,105 for single adults) was supposed to be eligible for Medicaid; however, a Supreme Court decision made this expansion of Medicaid coverage optional.

In 2014, Pennsylvania’s then-governor, Republican Tom Corbett, chose not to expand the program, leaving hundreds of thousands of Pennsylvanians in a coverage gap: they made too much money to qualify for Medicaid under the old rules, but not enough to qualify for subsidies to help purchase private insurance. They would simply have to go without, which is why Pennsylvania has a much higher uninsurance rate than its neighboring states, all of which did expand Medicaid:

Halfway through Obamacare’s first year, Corbett proposed an alternative plan called Healthy PA: it would take the money the state would have received for Medicaid under Obamacare, and pay for private insurance coverage instead. His proposal also introduced premiums for Medicaid beneficiaries making as little as 50% of the poverty line ($5,835 for a single adult), added a requirement that enrollees be either working or looking for work, and would cut benefits for existing Medicaid enrollees.

To do all this, he needed approval from the federal government, in the form of waivers exempting the state from certain Medicaid rules. The federal government rejected most of Corbett’s proposed waivers, like the job search requirement and private insurance plans for new enrollees, but said they would allow the state to charge premiums starting in 2016 (but only for new enrollees with incomes above the federal poverty line):

However, as we reported back in September, the biggest changes were to existing Medicaid coverage, moving many current enrollees into a plan with fewer benefits. Healthy PA divided Pennsylvania’s Medicaid into three different systems:

Each of these would have a different benefits package– you can see what the Corbett administration proposed for each plan here (although the final lists of benefits were still being negotiated with the federal government when Corbett left office).

Healthy PA has been a mess so far

“Logjam of applicants waiting for approval”: Enrollment for Healthy PA began on December 1; however, seven weeks into the launch (and a few days before Wolf’s inauguration), The Philadelphia Inquirer reported that only 55,000 of an estimated 151,000 people who applied for the program by Jan. 1 had been enrolled:

The chaos and the logjam of applicants waiting for approval are partly due to the Department of Human Services asking people to supply detailed personal financial information – bank account statements, life insurance statements, vehicle value, and retirement account statement – that is not required under Medicaid expansion.

Letters from the state to new applicants confusingly said that providing this information was optional; but what navigators found was that if their clients didn’t provide it, their applications would be stalled or denied.

“The value of your bank account is irrelevant to your eligibility under the extension category,” said Kyle Fisher, a staff attorney for the Pennsylvania Health Law Project. “But practically to get an eligibility decision as soon as possible, I would suggest that you have that information.”

So why was the state is requesting this information if it’s not required under Obamacare’s Medicaid expansion? According to a spokesperson for the state’s Department of Human Services, it was to necessary determine which of Healthy PA’s three new Medicaid categories to place applicants in.

“Wreaks chaos for addiction and alcohol treatment providers”: In another article, the Inquirer reported that due to a glitch in the system, thousands of people who had been receiving treatment for substance abuse and mental health issues were mistakenly dumped in Healthy PA’s private coverage option instead of the high risk plan. Those private plans don’t offer addiction and mental-health treatment that are as robust as what these enrollees were getting before:

The result is thousands of people have been locked out of treatment centers, risking their lives, said Deb Beck, president of the Drug and Alcohol Service Providers Organization of Pennsylvania, a statewide coalition of treatment programs.

“The problem with addiction is you can’t wait,” she said. “Alcohol and other addictions are progressive and are always fatal illnesses if they go untreated. You can’t wait.” […]

People shut out of care often end up in emergency rooms, jail, or on the street, Michael Harle [president of a drug and alcohol treatment center] said. Some die. In 2011, Pennsylvania recorded more than 2,000 drug overdose deaths, ranking it seventh nationally, according to the federal government.

“Discouraging people from obtaining insurance”: Healthy PA’s new Medicaid premiums don’t start until 2016, but when they do come online, they could be a problem.

Health policy experts make a distinction between premiums and cost-sharing (things like deductibles, copays, and coinsurance): premiums are the way insurers collect the money they need to pay for care; on the other hand, cost-sharing, which you pay when you need care, is meant to discourage people from over-using healthcare services– giving them “skin in the game,” as it’s often put.

However, premiums in Medicaid work differently; they barely cover any of the cost of care at all. Instead, they work as another form of cost-sharing– but unlike copays or deductibles, which discourage unnecessary care, premiums can discourage enrollees from getting any care at all. As Dr. Aaron Carroll writes for the New York Times’ Upshot blog:

A recent study in the journal Health Affairs found that a $10 increase in monthly Medicaid premiums resulted in a 6.7 percent reduction in Medicaid and the federal Children’s Health Insurance Program coverage for families earning between 100 percent and 150 percent of the poverty line. It also resulted in a 3.3 percent increase in the uninsured. These small premiums may lead people not to obtain insurance.

This mirrors work published earlier this year by Laura Dague in the Journal of Health Economics. She looked at how small premiums affected enrollment in the Wisconsin Medicaid program, and found that the creation of a $10 monthly premium was associated with a 12 percent reduction in the likelihood of people remaining enrolled in Medicaid for a full year.

How Wolf has begun the transition away from Healthy PA

As we noted back in September, the contracts with the managed-care organizations that provide Medicaid coverage in Pennsylvania have already been signed. Until now, it was a little unclear how much power the new governor had to undo Healthy PA in the near future.

Turns out he can at least address its most disruptive changes to the existing Medicaid system. According to a statement released on Monday, Wolf has “directed the Department of Human Services (DHS) to submit a letter to the federal government withdrawing the ‘low-risk’ health care package from further federal consideration.” Instead, says the announcement, “The department is currently working with the federal government to develop one benefit package for adults. Once that has been finalized, adults in Healthy and Healthy Plus will be transitioned to the new Adult package.”

In other words, Wolf is cutting the number of different Medicaid systems from three to two– an “Adult plan” for people who were eligible under the old rules, and the private coverage option (PCO) for those who are newly eligible under Obamacare.

Wolf says he eventually plans to move people who enroll in the PCO plan to the Adult plan as well, although, “This transition will occur over a longer period of time to ensure that individuals are clearly informed of these changes and they do not experience any gap in coverage.”

The statement doesn’t mention Healthy PA’s new premiums, but the changes that were announced– creating just one Medicaid system for everyone who’s eligible– will at least eliminate the biggest source of chaos and confusion.

Next post: What Steven Brill and 60 Minutes got wrong about Obamacare

Previous post: All that really needs to be said about the measles outbreak: the vaccine is safe and it works