Warning: Use of undefined constant wp_cumulus_widget - assumed 'wp_cumulus_widget' (this will throw an Error in a future version of PHP) in /home/customer/www/whatifpost.com/public_html/wp-content/plugins/wp-cumulus/wp-cumulus.php on line 375
 Obama’s Health Care Proposal
≡ Menu 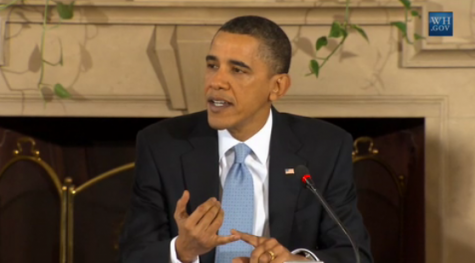 It looks like we got the new website finished just in time – right as the health care reform debate is heating up again.

On Thursday, President Obama hosted a health care summit with Democratic and Republican Congressional leadership.  It was… well… long.  Later this week, we’ll talk about some of the points that were raised during the seven hour-long meeting.  But for now, we wanted to look at the biggest news from the event, which came before the summit even started:  President Obama released his own health care proposal.

It’s not a full bill– Obama said it was intended just as a starting point for the talks on Thursday– but it was the first official look at how Democrats will try to merge the House and Senate bills.  You might remember that a while back we looked at the major issues where the two bills differ.  Let’s see how Obama’s proposal would bring them together…

White House spokesperson Robert Gibbs, stated (well, sort of stated) that there were concerns about whether or not a public option would make it through the Senate.  The White House may be right about the public option’s chances, but it’s still infuriating.  For one thing, the Senate doesn’t really need 60 votes anymore– it can pass all the needed changes through the reconciliation process, which only requires 50 votes.

Second, the public option is still one of the most popular pieces of health care reform.  A recent poll conducted for a coalition of progressive groups found that, for example in Virginia, home to two moderate Democratic Senators who are nervous about the public option:

In nearly every state polled the results were the same- over 60% support the public option, less than 40% support the Senate bill.  As Michael Tomasky put it in the Guardian: “The results are basically in line with a raft of polling since this whole thing started. The public option is supported by majorities in virtually all blue and swing states, and even in a few reddish ones.”

There is still hope for the public option- Gibbs admitted that it could be added by Senate leaders during the amendment process if they felt it had enough votes to pass.

All of the bills would expand Medicaid to people making up to 133% of the Federal Poverty Line (FPL) and provides subsidies for individuals and families making between 133% and 400% of the FPL.  The House bill would be a better deal for people at the lower end of that income scale (especially since it expands Medicaid even further, to 150% of FPL).

In general, subsidies under Obama’s proposal would be more generous than the Senate and less generous than the House.  To see how much people in different income brackets would pay, as a percentage of income, check out this chart:

The percentage points are the maximum percent of income that a family would spend on insurance premiums annually.  So for example, under Obama’s proposal a family of four making $29,000 would pay $870 in premiums each year, and the government would pick up the rest of the tab.

When the original draft of the Senate bill was released, unions were furious about the excise tax on expensive insurance plans.  Instead of targeting the very wealthy, they argued that it would affect mostly middle class workers who have generous benefits negotiated through union contracts.  And so the Senate struck a deal with organized labor- if you got health care under a union-negotiated contract, you wouldn’t have to pay the tax until 2018.  And when it did kick in the threshold for the tax would be higher.

Under Obama’s proposal the union deal would apply to everyone. The excise tax wouldn’t start until 2018, and the threshold would be much higher: $10,200 for individuals, $27,500 for families.

The proposal would also tax wealthier Americans.  Individuals making over $200,000/year and married couples making over $250,000/yr. would pay a 0.9% Hospital Insurance tax.  Also, these high income households would pay a 2.9% tax on unearned income.   Unearned income is basically income that you make just from having money– it includes things like interest and dividends from a stock portfolio.

House version: Contains the Stupak Amendment, which states that if you receive any federal subsidies for insurance your plan may not cover abortion.
Senate version: Slightly less restrictive- it lets health plans cover abortion, but every enrollee has to write a separate check for the part of the premium that covers it.
Obama’s Proposal: Doesn’t mention abortion.

Again, since it’s using the Senate bill as a starting point, this would probably mean state-based exchanges.

Other New Stuff in Obama’s Proposal:

Eliminating Ben Nelson’s special Nebraska Medicaid Deal: You might remember that in order to get Sen. Ben Nelson’s support, the Senate bill included a special deal that exempted Nebraska (and only Nebraska) from having to pay for any of the Medicaid expansion under the bill.  Obama’s proposal eliminates that specific deal, but provides more money to all states to help them expand Medicaid.

Closing the Medicare prescription drug “donut hole” coverage gap: Medicare stops paying for prescriptions after the plan and beneficiary have spent $2,830 on prescription drugs, and only starts paying again after out-of-pocket spending hits $4,550.  There’s a nearly $2000 gap in coverage that seniors are responsible for, and many can’t afford it.  The Senate bill raises the dollar amount before the donut hole begins, but doesn’t eliminate it.  Obama’s plan would eliminate the gap slowly, phasing it out by 2020.

Creating a new Health Insurance Rate Authority: Both the House and Senate bills include a requirement stating that if an insurance company is going to raise premiums, it needs to submit the rate increase to either the Secretary of Health and Human Services or the state authority for review.  In the Senate bill, if a rate hike is found to be unjustified, that insurer could potentially be banned from the exchange.  Obama’s proposal goes even further, creating a new federal authority to examine rate hikes.  If a rate hike was found to be unreasonable the insurer would have to lower premiums, provide a rebate to consumers, or take some other action to make premiums affordable.

[You can read Obama’s entire proposal on the White House website.  And for more on how it compares to the House and Senate bills, the Kaiser Foundation already has it up on their Side-by-side comparison site and Think Progress’s Wonk Room has a great, simple chart comparing some of the bills’ other provisions that we didn’t cover here.]