Warning: Use of undefined constant wp_cumulus_widget - assumed 'wp_cumulus_widget' (this will throw an Error in a future version of PHP) in /home/customer/www/whatifpost.com/public_html/wp-content/plugins/wp-cumulus/wp-cumulus.php on line 375
 Obamacare plans tend to have smaller networks– why is that and is it a problem?
≡ Menu

Obamacare plans tend to have smaller networks– why is that and is it a problem? 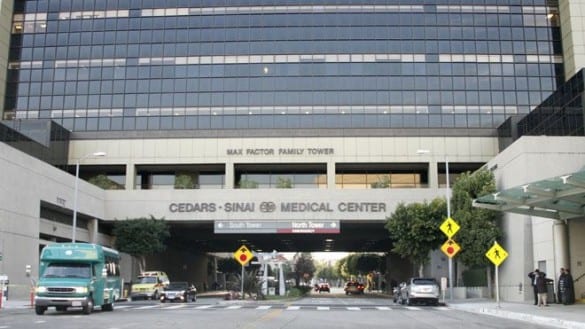 Now that people are starting to use their Obamacare coverage, some people have noticed that they can no longer go to the same doctor. For example, on Tuesday, Senator Tom Coburn (R-Okla.), a longtime opponent of Obamacare who’s undergoing treatment for prostate cancer, mentioned to MSNBC’s “Morning Joe” that his oncologist isn’t covered by his new Obamacare plan.

Plenty of criticisms from Obamacare opponents have turned out to be wrong or intentionally misleading (i.e., “death panels” or the supposed insurer “bailout”), but this one isn’t just Republican hype– some people who switch to Obamacare plans really will have to switch doctors. Partly this is just how all health insurance works– every plan has its own set of providers, and there’s no guarantee your old doctor will be covered by a new plan. But it’s also partly because plans sold on the Obamacare marketplaces tend to have smaller provider networks.

While it’s obviously frustrating to have to switch doctors, there is a tradeoff: these smaller networks mean lower premiums and (somewhat counterintuitively) could lead to better quality care.

Why do Obamacare plans have narrower networks?

Under the old system insurers had a bunch of different ways to keep premiums down that involved squeezing customers:

You might have noticed that these were some of the most hated and backward parts of the old health care system, and for the most part these tactics were eliminated by Obamacare.

Although insurers can no longer exclude the sick or limit how much they’ll pay for care, they can keep premiums lower by paying providers less– and an effective way to do that is by keeping networks small. Having smaller provider networks that means insurers can offer more business to the doctors and hospitals that are in their network, allowing the insurer to negotiate a lower rate (it’s like buying in bulk). Plans can also keep costs down by eliminating the providers that charge the most.

The downside is that consumers then have fewer choices for doctors and hospitals. Insurers could offer plans with larger networks, but, they’d be more expensive and according to The New Republic’s Jonathan Cohn, insurers believe there’d be little demand for them:

According to nearly every source inside and outside the industry I’ve consulted, the primary reason carriers are offering so many small-network plans in the exchanges is that they believe consumers want them. Their marketing research suggests that, when forced to choose between paying higher premiums for wider networks or lower premiums for narrower networks, the majority of people will go for the cheaper insurance. The one survey I’ve seen on this question, by Morning Consult, suggests the carriers may be right: In that survey, nearly 60 percent of respondents said they’d opt for plans with fewer provider choices if meant saving on premiums.

How narrow are we talking?

There isn’t much nationwide data on the size of provider networks, but we can look at individual plans on the exchanges to get an idea. For example, in California, the plans Blue Shield is offering on the Obamacare marketplace only cover 60% of the doctors and 75% of the hospitals from its employer plans. And a recent report from McKinsey consultants looking at silver plans in 20 cities across the country found that 70% included fewer than 70% of local hospitals in their networks, and 38% of the plans included fewer than 30% of hospitals. 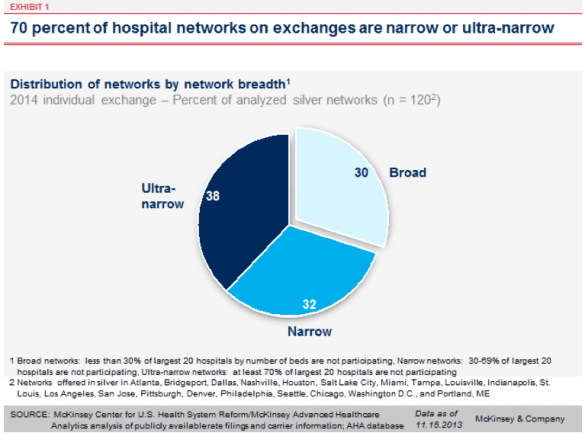 It’s important to note that smaller networks doesn’t mean dangerously small. Obamacare includes a “network adequacy” requirement, which says that every insurer’s network has to include enough specialists to provide the required essential health benefits “without unreasonable delay.” On top of that, many states have their own network adequacy requirements beyond those in the Affordable Care Act. There’s also an appeals process, if you feel that your insurer can’t (or won’t) provide medically necessary care within its provider network. And finally, we should also point out that these smaller networks would have no effect on your ability to get treated in an emergency– Obamacare prevents insurers from charging more for out-of-network emergency care.

Ok, so we know that insurers are offering smaller networks because it allows they don’t want to pay the high prices some hospitals are demanding– but it turns out these hospitals are some of the country’s most prestigious. For example, Blue Shield’s Obamacare plans won’t include L.A.’s renowned Cedars-Sinai Medical Center or hospitals affiliated with the University of California.

Intuitively, you’d think that the more expensive the hospital, the better the quality of care it would provide. But you’d be wrong explains The Washington Post’s Sarah Kliff:

Alas, the health-care system is anything but intuitive and, most research suggests, there is very little connection between how much we pay for health care and the quality of the provider. “Evidence of the direction of association between health care cost and quality is inconsistent,” Peter Hussey, Samuel Wertheimer and Ateev Mehrotra wrote in a recent RAND literature review.

“Most studies have found that the association between cost and quality is small to moderate, regardless of whether the direction is positive or negative.”

To give just one example, Jonathan Cohn looked at Cedars-Sinai and found that while it was ranked highly by two companies that rate hospital safety and quality, several other local hospitals that charge far less money were ranked even higher.

In a best-case scenario, they include a network of doctors who work more closely together to deliver coordinated, high-quality care. The best example of this is probably Kaiser Permanente (which is not affiliated with Kaiser Family Foundation), one of the top-ranked health plans that limits patients exclusively to seeing the doctors that they employ. Patients are generally okay with that model because they’re satisfied with the small number of hospitals and physicians they do get to choose from.

The alternative to small networks

While Kaiser Permanente shows that’s it’s possible to get excellent care from a smaller network of providers, there can be practical drawbacks (like having to travel a considerable distance to get treatment). Also, it can be difficult to find out what doctors and hospitals are covered by what Obamacare plans (the online marketplaces require include a link to insurers’ websites, but that info is often missing or incomplete). And while those expensive, prestigious hospitals we mentioned may not be any better than a community hospital for common procedures, for complicated cases requiring highly specialized treatment they’re often great.

The only way to truly guarantee that everyone has access to any doctor they need to see would with more regulation: either through an all-payer system (that’s where the government sets the doctor and hospital rates, so there’s no need for smaller networks to keep price down) or a single-payer system (which does the same thing, but would also get rid of insurers altogether). In other words, not having access to a certain doctor or hospital may be an actual problem for some, but don’t expect conservatives like Coburn to complain too loudly about it.

Previous post: No, Obamacare does not contain an insurance company bailout