Warning: Use of undefined constant wp_cumulus_widget - assumed 'wp_cumulus_widget' (this will throw an Error in a future version of PHP) in /home/customer/www/whatifpost.com/public_html/wp-content/plugins/wp-cumulus/wp-cumulus.php on line 375
 Obama calls the GOP’s bluff on flexibility
≡ Menu 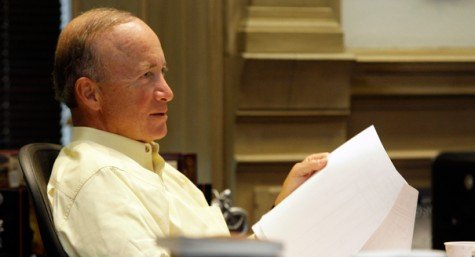 “If the new law is not repealed by 2013, what could be done to reshape it in the direction of freedom and genuine cost control?”

This got our attention. For the first time we can remember in nearly two years of debating health reform, Republicans are offering specific suggestions for improving the Affordable Care Act, instead of simply trashing the whole thing. True, without offering any evidence, they did still say that the law would be a disaster that will blow up the deficit and destroy private insurance. And as Secretary Sebelius pointed out in her response, pretty much every suggestion offered by the Republican governors is already in the new law. Still… baby steps.

The main point that the Republican governors made is that states could do a better job at health reform than the federal government, but the Affordable Care Act doesn’t given them enough flexibility. So the Obama administration called their bluff… by endorsing the Empowering States to Innovate Act.

The Background
We covered this bill a few months ago, but in case you missed it, here’s a quick recap.

The Affordable Care Act already contains a provision saying that if a state has a plan that:

The state can get:

The problem is that the waivers won’t go into effect until 2017. If a state does come up with an alternative plan, they’d still have to set up the federal system which goes into effect in 2014 only to scrap it three years later– wasting a bunch of time and money.

Why do states have to wait until 2017 to get waivers?
Thanks to an unfavorable Congressional Budget Office score. According to Vermont Senator Bernie Sanders, who pushed hard to get the waiver included in the new law:

Empowering States
Soon after the Affordable Care Act passed, Senators Scott Brown (R-Mass.) and Ron Wyden (D-Ore.) introduced the Empowering States to Innovate Act, which would simply let the state waivers start when the rest of reform starts in 2014. President Obama endorsed the Act this week, telling the governors:

“It will give you flexibility more quickly while still guaranteeing the American people reform.”

The Republican Response
Republicans are already complaining that Obama’s proposal is meaningless. “Flexibility … I believe the technical legal term is baloney,” said Sen. Orrin Hatch (R-Utah).  The National Review’s Yuval Levin says, “it would allow conservative-leaning governors essentially no freedom to move in the direction of greater competition and more consumer-driven health care.”

According to The New Republic‘s Jonathan Cohn:

Hatch, Levin and the other critics of Obama’s proposal have a point: It wouldn’t allow them to enact the sorts of health care reforms they would prefer. But that’s because their proposals wouldn’t come even close to making health care affordable for all Americans. The real problem here, in other words, isn’t the lack of flexibility in the health law. It’s the lack of workable ideas from critics on the right.

For example, Mitch Daniels is quick to tout his consumer-directed HSA style plan, Healthy Indiana, which he introduced as a Medicaid alternative for his state. But as Cohn points out:

[The coverage] is less comprehensive. For instance, the benefit package has an annual limit of $300,000 and a lifetime limit of $1 million, which is less than some people with serious medical problems will need. And although the program has yielded some positive results, the preliminary assessments suggest that, on a per person basis, it’s still more expensive than Medicaid.

Really, only one state has come up with an alternative that meets all the guidelines for the waiver:  it won’t kick people off insurance, or stick them with crummy, high-deductible plans that don’t cover vital treatments, or run up huge deficits.  But conservative Republicans are gonna hate it even more than “Obamacare.”

Vermont
In our earlier coverage we pointed out that the Vermont state legislature had already created a commission to design a single payer health care system for Vermont. Well, the commission returned with a proposal, and the governor has already introduced a bill that would get rid of most kinds of private insurance and create a publicly funded insurance pool for most state residents.

Right now Vermont plans to introduce its single payer plan in three stages, and key details– including how to pay for the system– are still open for debate.

The reforms enacted prior to the implementation of single payer are inadequate and delay fundamental reform for 3-6 years. Several states have enacted reforms in the past only to repeal them before full implementation.

But the delay is necessary in working with the requirements of the Affordable Care Act. If the Empowering States to Innovate Act is passed, the final stage of the Vermont single payer plan could go into effect three years sooner.

Will Empowering States to Innovate pass?
There are a couple things that might hold it up. For one, as Washington Post’s Ezra Klein points out, before Obama endorsed the, it made sense for Republicans to support it politically. They could say, “”It’s such a bad bill that states need to write their own policy.” But with Obama calling their bluff, the ball is in the states’ court, and so far they don’t have a workable alternative. Republicans might try to kill the act just to save face.

The other issue is cost. Thanks to the CBO score we mentioned, the bill has an estimated price tag of $4 billion.  That’s not a lot compared to the rest of health reform, but these days with Republicans trying to cut a disastrous $100 billion from the budget, any new spending is a tough sell.

But it’s Republicans who are arguing that states can do health reform more cheaply and effectively than the federal government. If they’re serious about giving states flexibility, it may be time to actually put their money where their mouth is.

Next post: Some New Rules for Talking About Health Reform