Warning: Use of undefined constant wp_cumulus_widget - assumed 'wp_cumulus_widget' (this will throw an Error in a future version of PHP) in /home/customer/www/whatifpost.com/public_html/wp-content/plugins/wp-cumulus/wp-cumulus.php on line 375
 Mitch McConnell and Rand Paul want to repeal “Obamacare” but possibly keep “Kynect.” They’re the same thing
≡ Menu 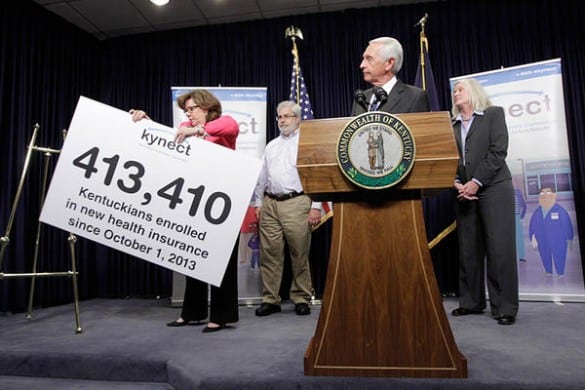 Kentucky is turning out to be a good example of how the politics of Obamacare have changed now that the law is actually in place. Its senators– Mitch McConnell and Rand Paul– have been two of Congress’s most vocal opponents of the new law, consistently calling for the repeal of “all of Obamacare.” They still do, but now that the law has been implemented, they’ve been getting a follow-up question: What should happen to the over 400,000 Kentuckians who got health insurance through the health care exchange created by Obamacare? And that’s a question that neither will answer.

Kentucky’s an interesting case because while, as President Obama put it, “Kentucky’s not the most liberal part of the country,” its popular Democratic governor, Steve Beshear, has been one of Obamacare’s most vocal supporters. In this year’s State of the Union speech, President Obama said, Beshear is “like a man possessed when it comes to covering his commonwealth’s families.”

He wasn’t exaggerating– here’s Beshear writing in a New York Times op-ed shortly before the launch of the Obamacare exchanges:

Under Beshear, Kentucky expanded Medicaid and built its own exchange website, Kynect, instead of signing onto the federal exchange, and it had probably the most successful rollout of any state (it was one of the only marketplaces that worked on October 1). There was also a major outreach component, with public health workers traveling to state fairs, bourbon and barbecue festivals— really anywhere they might get uninsured Kentuckians to sign up.

All this seems to have worked– Kentucky cut its uninsured rate by more than half by the end of Obamacare’s open enrollment period. One in ten residents received coverage thanks to the new law.

Despite the success that Kentucky has had getting residents covered under Obamacare, the law is still unpopular… sort of. A Marist poll conducted for NBC News last month found that only 33% of Kentucky voters have a favorable view of Obamacare while a majority, 56%, have an unfavorable view. NBC points out that this is “hardly surprising in a state where the president’s approval rating hovers just above 30 percent.” 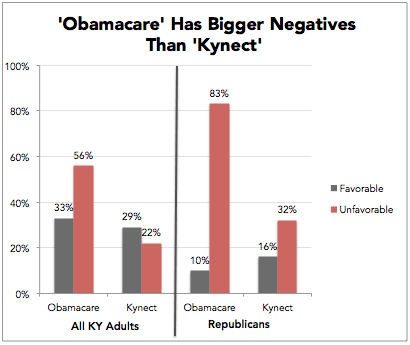 What’s interesting though is what happens when you ask Kentucky voters their opinions on Kynect, the state exchange created by Obamacare. According to NBC:

“Call it something else, and the negatives drop,” said Marist pollster Lee Miringoff.

In other words, Obamacare is pretty unpopular, but kynect is not– even though they’re the same thing.

Kentucky’s senators are of course are fully aware that Kynect and Obamacare are the same thing. However here’s how McConnell answered a question about how he would respond to those who say repeal would take away the healthcare of 413,000 Kentuckians:

WHAS’ Joe Arnold [asked], “But if you repeal [Obamacare], won’t all of the state exchanges be dismantled? How does that work?” McConnell then launched into his standard “solution” of sorts, calling for an “international market” of insurance companies that aren’t limited by state lines, in addition to “malpractice reform.” […]

Noting that McConnell didn’t answer his question — nor the one before it, though McConnell was accusing Alison Lundergan Grimes of avoiding ACA questions — Arnold followed up, asking “Should Kynect be dismantled?” McConnell gave this jaw-dropping one-sentence reply: “I think that’s unconnected to my comments about the overall question here.”

A follow-up statement from McConnell’s spokeswoman is no clearer: “If Obamacare is repealed, Kentucky should decide for itself whether to keep Kynect or set up a different marketplace.”

Rand Paul gave a similar answer to the same question, about whether Kentucky’s Kynect exchange should be dismantled:

Paul said, “You know I’m not sure,” suggesting a great deal of complexity to how “we unravel or how we change things.”

When asked a second time if he would want to dismantle Kynect, Paul said: “I would repeal all of Obamacare.”

McConnell and Paul’s answers attempt to exploit the confusion about the difference between “Obamacare” and “Kynect.” They’re vague enough that the senators could plausibly claim they were talking about just the Kynect website, which was set up using federal funds, but the state could continue running.

However without Obamacare there would be no Medicaid expansion, no subsidies for private coverage, and insurers would be free once again to drop customers who get sick– in other words, all the things that made it possible for Kynect to provide coverage to over 300,000 uninsured Kentuckians. Without Obamacare, it becomes, in the words of The New Republic’s Jonathan Cohn, “a dressed up version of ehealthinsurance.com.”

Of course reporters who asked Paul and McConnell weren’t just asking what should happen to the website if Obamacare were repealed. They were asking what should happen to the entire exchange (regulations, subsidies, Medicaid and all), and the hundreds of thousands of Kentuckians who gained coverage through it. That’s a question McConnell and Paul don’t have an answer for.

Next post: Explainer on the Supreme Court’s contraceptive decision

Previous post: The EPA’s plan to combat climate change and what it means for America’s health