Warning: Use of undefined constant wp_cumulus_widget - assumed 'wp_cumulus_widget' (this will throw an Error in a future version of PHP) in /home/customer/www/whatifpost.com/public_html/wp-content/plugins/wp-cumulus/wp-cumulus.php on line 375
 Medicaid patients and the emergency room
≡ Menu

Medicaid patients and the emergency room 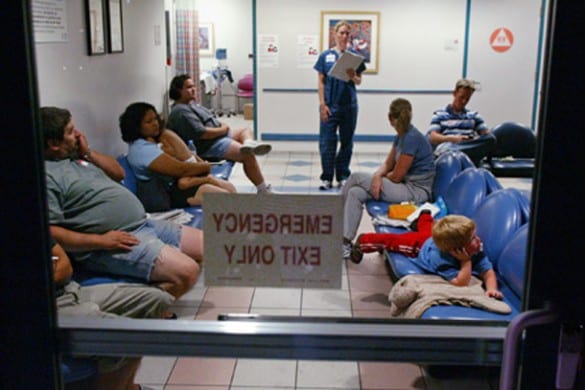 In our last two posts, we’ve looked at a couple of the shaky arguments health reform opponents have made against expanding Medicaid. Here’s another one: “Medicaid patients use the emergency room for routine care, driving up health care costs.” But according to a recent study by the Center for Studying Health System Change (CSHSC), this simply isn’t the case.

The Washington Post’s Sarah Kliff already did a great post looking at the results of the study, so we’ll let her explain:

Medicaid patients do have a significantly higher rate of emergency department use. In 2008, Medicaid enrollees had 45.8 emergency room visits per 100 enrollees, compared to 24 visits for the same number of privately insured individuals.

[But] when Medicaid patients went to the emergency room, it turned out, they did so for largely acute medical problems. Three-quarters of the Medicaid visits were categorized as emergent, urgent, or semi-urgent. Among those with private coverage, the number stood at 78 percent. 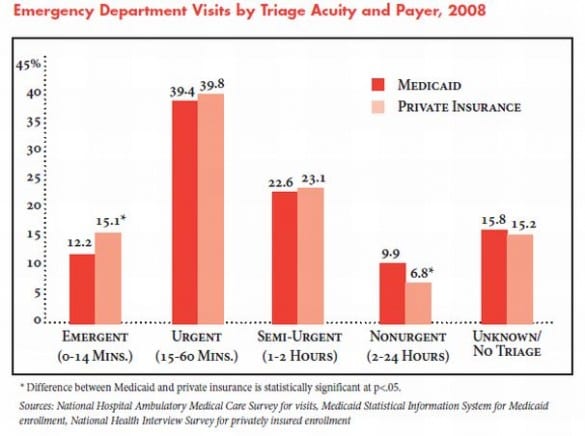 In other words, Medicaid patients really are using the emergency department for, well, emergencies. A number of other studies (like this one) have pointed towards a similar conclusion.

The real question, then, why Medicaid patients have a much higher rate of emergency department use in the first place. Kliff gives a couple possible answers:

It could have something to do with the fact that Medicaid tends to cover higher-risk patients, like the disabled and pregnant women.

It may also reflect a lack of access to primary care, as some surveys show a shrinking number of doctors who accept new Medicaid patients. If health problems go untreated, the thinking goes, they could become worse and ultimately result in an emergency room visit.

“The misconception is that Medicaid patients get their primary care at the emergency department,” said Maryland’s Mortensen. “We see in this study that’s not true, but we don’t know if they’re getting their primary care elsewhere.”

We’ll look at the possible Medicaid doctor shortage in our next post– the last in our series on Medicaid. In the meantime, you can read Kliff’s entire article here.

Next post: What each candidate ACTUALLY proposes for Medicare

Previous post: Surprise! Medicaid is better for your health than having no insurance