Warning: Use of undefined constant wp_cumulus_widget - assumed 'wp_cumulus_widget' (this will throw an Error in a future version of PHP) in /home/customer/www/whatifpost.com/public_html/wp-content/plugins/wp-cumulus/wp-cumulus.php on line 375
 Medicaid and the “anti-stimulus”
≡ Menu 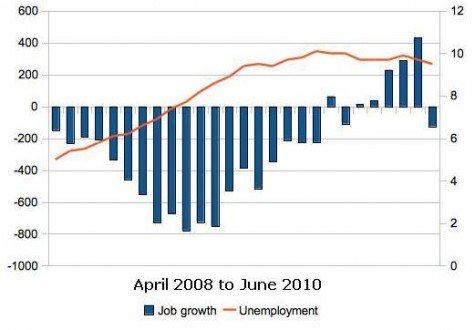 The latest employment numbers came out last week, and the numbers weren’t good:

Payrolls dropped by 125,000. In another one of those unwanted lessons in how we calculate unemployment data, the unemployment rate dropped from 9.7 percent to 9.5 percent — but not because people got hired. Instead, 652,000 people gave up and stopped looking for work.

The silver lining was that hiring by private industry was up 83,000 (the 125,000 total loss was mostly from temporary census jobs expiring), but even that figure represents a decline— fewer jobs were created than in previous months.  Many economists worry that we’re looking at a double-dip recession (a 2nd recession almost immediately after the previous one).

Now, at this point you might be wondering– what happened to the massive $787 billion stimulus that Congress passed last year?  Wasn’t that supposed to create millions of new jobs?   Did it fail?

Evidence shows that the stimulus did work, but only partially, thanks to what Washington Post blogger Ezra Klein calls “a massive anti-stimulus that’s ripped through the states.”  And at the center of the anti-stimulus…  health care, of course.

The Stimulus
First, let’s look at how the stimulus was supposed to work.  According to Dean Baker, an economist with the Center for Economic and Policy Research:

The collapse of the housing bubble reduced annual demand from the private sector by almost $1 trillion.

With consumers suddenly buying a trillion dollars less stuff every year, companies didn’t need to produce as much, and started laying off workers left and right.  To avoid certain economic disaster, Congress passed the stimulus, which contained a mix of tax cuts, help for the unemployed, and spending to fill the hole in demand and create jobs.  The idea is that government spending keeps the economy moving until consumers feel confident buying stuff again, and companies start hiring.

And for the most part it did what it was supposed to do… sort of.  Ezra Klein explains:

[The stimulus] might have been too small, and there’s plenty to argue over in its composition, but analysts say it did essentially what it promised: IHS Global Insight, Macroeconomic Advisers and Moody’s Economy.com all estimate it created around 2.5 million jobs. The problem is that it wasn’t alone.

The Anti-Stimulus
The problem has been at the state level.  Unlike the federal government, which can borrow money until the economy is back on its feet, states are in a tight spot.  Forty-nine states have balanced budget laws (Vermont is the one exception), which means that in a recession– when revenues drop and more people need state services– state governments have to dip into reserve funds (or slash spending and raise taxes).

After over two years of the longest and most brutal economic downturn since the Great Depression, states’ reserves are tapped out.  Meanwhile, the Center on Budget and Policy Priorities expects the total state shortfall will reach $610 billion from 2009 to 2012.  To keep their budgets balanced, states will have to make massive cuts in spending.

That’s another $610 billion hole in the economy.  Now for some quick math: the stimulus was $789 billion, but since much of that money was saved, the effective stimulus is probably much less than that, maybe even less than $600 billion.  In other words, the states’ budget crises could do just as much damage to the economy as the stimulus did to help.

Wait, what does this have to do with health care?
So as we mentioned earlier, health care is at the center of the anti-stimulus, thanks to Medicaid.  Medicaid is the second biggest budget item for most states, after education.  And the way it’s set up makes it a particularly tough burden for states in an economic downturn.  During a recession two things happen:

At the exact moment that people turn to Medicaid in huge numbers, states have to cut spending in the program.  Congress recognized this, and the stimulus included billions of dollars to help states pay for Medicaid, but that funding is set to expire in December.  Most states are working on next year’s budget now, and most of them had expected Congress to extend the additional Medicaid funding another 6 months.   In a recent survey, the National Conference of State Legislatures found that 30 states were already factoring the money into their budgets for 2011.  Congress, however, dropped that provision from the jobs bill.

If states don’t get that Medicaid funding it could mean disaster for the economy.  The Center for Budget and Policy Priorities estimates that without aid 900,000 jobs could be lost nationwide, and certain states will be especially hard hit.  For example:

However, some in Congress feel that the deficit is a bigger problem than jobs.  It’s not just Republicans (who seem to vote against pretty much anything the Democrats propose)– Blue Dog Democrats have also been pushing for deficit reduction, even at the expense of help for states and the unemployed.   Dean Baker singles out Jason Altmire, who was instrumental in removing the states’ Medicaid help from the jobs bill and told the Washington Post:

“We’ve hit the wall. We’ve come to the tipping point where we’re not going to do anymore… I think the case can be made that there are still more people who need jobs than there are jobs available. … But what’s the limit?”

This is not a marginal call. It’s kind of like saying that AIG may have become somewhat over-extended. Unfortunately, Mr. Altmire has apparently left planet earth and decided that his top priority is reducing the size of a supplemental appropriations bill.

Altmire’s cuts will reduce growth by roughly $50 billion. This will throw more than 300,000 people out of work […] Mr. Altmire can explain to the kids whose parents are forced to give up their homes that they will have a lower interest burden on the debt (which is not even true). The kids will no doubt thank Mr. Altmire for his consideration.

What to Do?
Obviously, restoring the $24 billion in additional funding for Medicaid would help.  Not only will it help shore up Medicaid, but aid to states is one of the most effective forms of economic stimulus, producing almost $1.50 of stimulus for every dollar spent.

But a more long term solution would be to take Medicaid away from the states and make it fully federal.  States partially control Medicaid now so that each can decide how much to invest in health care for the poor, but under health care reform, Medicaid eligibility will be standardized across all states.  Also, according to economist Tyler Cohen, on his blog  Marginal Revolution:

This would give state budgets a huge break, and help employment, yet as a one-time change it reduces the moral hazard problems from ongoing outright grants [it won’t encourage states not to put money away for future recessions].  Furthermore federalizing Medicaid is a good idea in its own right and it also could be a spur to make other improvements in the program.