Warning: Use of undefined constant wp_cumulus_widget - assumed 'wp_cumulus_widget' (this will throw an Error in a future version of PHP) in /home/customer/www/whatifpost.com/public_html/wp-content/plugins/wp-cumulus/wp-cumulus.php on line 375
 McHealthcare
≡ Menu 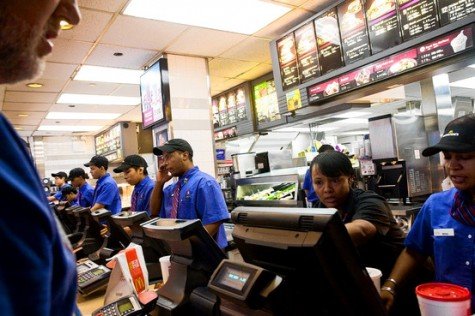 Yikes, sounds like the new law could be a disaster for McDonald’s employees, right?  Not so fast.

One of the new regulations about to take effect under the Affordable Care Act requires that insurers spend no less than 85 percent (in some cases, 80 percent) of premium dollars on actual patient care, as opposed to overhead, marketing, or profit. McDonald’s isn’t happy about that.

The problem is that McDonald’s does offer “insurance” but only in the loosest sense of the word.  They, and a number of other chains including Home Depot, CVS, Staples, Disney, and Blockbuster offer what are known as mini med plans.

What the Wall Street Journal article doesn’t mention is that two thousand dollars barely covers a broken arm, and a single emergency room visit can cost more than $10,000.  If you come down with anything more serious, these mini-med plans are pretty much useless.  Really, McDonald’s employees would almost be better off taking the money they spend on premiums each week and sticking it under their mattresses.  The only advantage to having one of these plans is that the insurance company gets a discount that you wouldn’t get if you paid cash.  (Using the broken arm example: the price for the insurance company on average would be about $1,700.  The price to you as an individual would be over $8,000.)

And since the plan pays out almost nothing by health industry standards, the percentage of premiums that is spent on patient care is very, very low.  McDonald’s wouldn’t say what that percentage is, but it’s definitely less than the 80% or 85% that plans have to pay under the new law.

Still, it’s a little premature to say that McDonald’s will have to drop these mini-med plans.  McDonald’s has already issued a statement saying they have no plans to drop coverage.  Meanwhile, the Obama administration pointed out that they haven’t even issued the final guidelines yet.  They’ve also said that they’re working with McDonald’s and other businesses to make sure they can keep offering plans until 2014, when the main part of reform kicks in.

However, since conservative sites like Fox News and the Drudge Report are already hyping this as a failure of “Obamacare,” it’s worth looking at what the situation will be for McDonald’s employees after 2014, when health reform is fully in place:

Any way you look at it, that’s a much, much, much better deal than paying $727 a year for $2,000 worth of… and we hesitate to even call it coverage… that McDonald’s employees get now.

*UPDATE* The administration still hasn’t issued the final regulations for medical loss ratios, but McDonald’s and 29 other companies have received waivers exempting them from another new rule under health reform. The new law states that, starting in 2011, health plans can’t have an annual limit of less than $750,000.  By 2014 plans won’t be allowed to have any annual cap on coverage.   But thanks to the waiver, these companies will be allowed to continue offering plans with an annual cap of less than $750,000, at least for the next year.

Meanwhile, Kaiser Health News and USA Today have a great article explaining mini-med plans (also known as “limited benefit plans”).  Unlike the Wall Street Journal article, the authors talk to people who were covered by these plans when they got sick.  Unsurprisingly, the plans were almost useless.