Warning: Use of undefined constant wp_cumulus_widget - assumed 'wp_cumulus_widget' (this will throw an Error in a future version of PHP) in /home/customer/www/whatifpost.com/public_html/wp-content/plugins/wp-cumulus/wp-cumulus.php on line 375
 The NYC beverage controversy, part 1: The case against soda
≡ Menu

The NYC beverage controversy, part 1: The case against soda 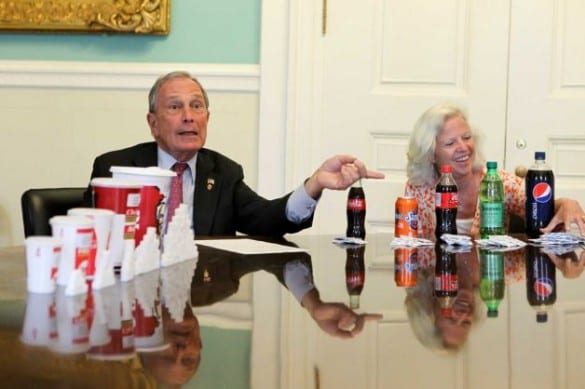 When New York mayor Michael Bloomberg announced a plan to ban the sale of sodas larger than 16 ounces in the city’s restaurants, delis, movie theaters, and food carts, we knew it would be controversial. We expected the showdown between public health health advocates who support the restrictions and those who say that even though we consume too much soda,  Bloomberg is going too far this time. It’s a worthwhile discussion.

What we didn’t expect was that anyone would defend giant sizes of soda– yet even the Daily Show questioned why Bloomberg singled out these beverages when so many other things can make us fat. In one lengthy segment, Jon Stewart laid out a pile of unhealthy food he found in Manhattan– a giant beef sandwich, a plate of Hooters’ deep-fried chicken wings with a bowl of cheese, and a chocolate sundae.

“All this is legal in New York City. Until God forbid I want to wash it down with a little something as pure and refreshing as Mountain Dew,” he yelled, sipping from a 32-ounce Big Gulp. And we have to admit, compared to the mountain of unhealthy food in front of him, the soda did look pretty harmless.

But this attitude that soda is “pure and refreshing” and not liquid candy, and that 32-ounces is a reasonable serving size, is exactly the problem. We’ll look at whether the ban is a good idea in our next post, but first here’s why it’s worth targeting soda.

Since 1980, obesity has skyrocketed in the United States– 34% of adults and 17% of children are now obese (and remember it’s not just a few extra pounds we’re talking about. For a person of average height, obesity is roughly 30 pounds over a healthy weight). As we wrote in an earlier post:

Scientists say that obesity is now a bigger threat than smoking– it causes more illness, and does as much or more to shorten healthy lifespans (smoking still kills more people every year though).  The author of one study, Roland Sturm, a senior economist at Rand Corp., says that obesity is like “aging 20 years” when measured by the onset of chronic medical problems.

It’s also an economic issue: we’re spending $147 billion each year to treat obesity, another $116 billion to treat diabetes, and hundreds of billions more to treat cardiovascular disease and the many types of cancer that have been linked to obesity. One recent study estimated that 30 percent of the increase in health care spending over the past 20 years could be attributed to the soaring rate of obesity.

Clearly obesity is a problem, so what’s causing it? Well, one obvious culprit is that we’re eating more. It’s easy to forget, since media attention is focused more on what we’re eating than how much, but if you increase your calories without exercising more to burn them off, you’ll gain weight. And that’s exactly what’s happened, with soda being a major source of those extra calories:

Research shows that over the last 30 years Americans consumed 278 more calories per day even as physical activity levels remained relatively unchanged. One of the biggest changes in diet during that period was the enormous increase in soda consumption, accounting for as much as 43 percent of all new calories.

Dozens of studies have looked at the connection between calories from soda and weight gain. Among them:

Still, it’s hard to get a clear picture from any individual study, since people who drink a lot of soda may have other unhealthy habits as well (like eating more fast food and watching more TV). Instead, some scientists have looked at the results of many different studies together, and according to Harvard’s School of Public Health, they’ve found a clear pattern:

Studies consistently show that increased consumption of soft drinks is associated with increased [calorie] intake. In a meta-analysis of 30 studies in this area, 10 of 12 cross-sectional studies, five of five longitudinal studies, and four of four long-term experimental studies showed this positive association. (3) A different meta-analysis of 88 studies showed that the effect appeared to be stronger in women, studies focusing on sugar-sweetened soft drinks, and studies not funded by the food industry. (4) Studies in children and adults have also shown that cutting back on sugary drinks can lead to weight loss. (5, 6)

The beverage industry tries to deflect attention away from soda by pointing out that “only” 7% of our calories come from soft drinks. But  there are a couple problems with that statistic.

For one, that 7% adds up. Americans consume 13.8 billion gallons worth of sweetened drinks every year– that’s the equivalent of a can of soda for every American every day of the year. Drink just one extra 12-ounce can of soda a day for a year without cutting back on calories elsewhere, and you could gain up to 15 pounds.

But the larger problem is that the 7% isn’t evenly distributed– some people don’t drink any soda, while others are drinking much more than a can a day. The size restrictions are aimed at this group.

2. Calories in beverages are particularly likely to cause obesity

With solid food, people tend to compensate for big meals or extra snacks by eating fewer calories later. For some reason this doesn’t happen with soft drinks– we can drink hundreds of calories and still not feel full. Scientists don’t know for sure why, but it might have something to do with a hormone called ghrelin:

When the hormone increases, you feel hungry. When you eat, the hormone goes down. However, it only works with food, not liquid. Drinking soda, juice, sports drinks and other sugar-sweetened liquids does nothing for your hunger, even if you consume hundreds of calories. As a result, sugar-sweetened beverages are often wasted calories.

Not only do our bodies not seem to register calories from soft drinks, but these calories might actually increase our appetite for unhealthy foods. Kelly McGonigal, a health psychologist at Stanford University, writes for Psychology Today:

Research shows that high-sugar foods- especially drinks, including soda- artificially boosts ghrelin levels. This is one likely reason that soda and fruit juice consumption are both associated with obesity. The drinks themselves may not be a diet-breaker, but if you sip them all day, your body starts to lie to you. When it does, you’ll be hungrier and more attracted to less healthy foods.

In any case, that’s one major difference between soda and the piles of food Jon Stewart laid out. If you gorge yourself on a 14-pound sandwich and fried wings you’ll get… full. But even when you’re full, you’ll still be able to “wash it all down” with 500 extra calories of pure sugar. 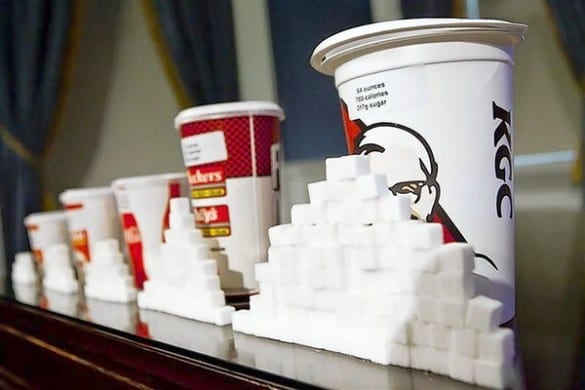 The average American consumes about 21 teaspoons of added sugars a day, according to a study by the Journal of the American Medical Association — almost double what we were consuming just 30 years ago. That adds up to more than 90 pounds of added sugar per person, per year.

The beverage industry is quick to point out that most (about 59%) of the added sugar in our diet comes from food, while “only” 40% comes from beverages. What they fail to mention is that many beverages are nothing but sugar and water– one can of soda contains the equivalent of 11 teaspoons of table sugar– which is why soda is the single leading source of added sugars among children, adolescents, and adults.

While scientists haven’t conclusively proven that sugar causes chronic illnesses like heart disease and diabetes, there is plenty of circumstantial evidence. As Gary Taubes writes in a fantastic article for The New York Times Magazine, titled Is Sugar Toxic?:

In animals, or at least in laboratory rats and mice, it’s clear that if the fructose hits the liver in sufficient quantity and with sufficient speed, the liver will convert much of it to fat. This apparently induces a condition known as insulin resistance, which is now considered the fundamental problem in obesity, and the underlying defect in heart disease and in the type of diabetes, type 2, that is common to obese and overweight individuals. It might also be the underlying defect in many cancers.

If what happens in laboratory rodents also happens in humans, and if we are eating enough sugar to make it happen, then we are in trouble.

Recently, researchers at the Harvard School of Public Health did a meta-study (a study of studies) looking at whether sugary drinks were linked to diabetes and metabolic syndrome (a collection of indicators that show your cells are becoming resistant to insulin and diabetes may not be far off):

They identified eight studies with enough data to let them check for a link between sugary drinks and type 2 diabetes and three similar studies of metabolic syndrome. The largest diabetes study, which followed more than 91,000 American women ages 24 to 44 for eight years, made the strongest case for a relationship, and it wasn’t just because higher consumption of sweetened drinks added excess calories that turned into pounds. While weight gain is a known diabetes risk factor, the diabetes-beverage link persisted even after adjusting for that.

By the way, if added sugar does in fact lead to insulin resistance, as some researchers believe it does, then it’s hard to avoid the conclusion that sugar causes some types of cancer. Taubes writes:

Cancer researchers now consider that the problem with insulin resistance is that it leads us to secrete more insulin, and insulin (as well as a related hormone known as insulin-like growth factor) actually promotes tumor growth.

[For a more thorough discussion of the possible link between sugar and cancer, we definitely recommend checking out the entire NY Times Magazine article.]

So to recap: At best, giant sodas are adding hundreds of extra calories on top of our regular diets, helping to send obesity rates soaring. Researchers at UC-San Francisco found that sugary soft drinks’ contribution to obesity meant 130,000 new cases of diabetes, 14,000 new cases of heart disease and 50,000 more life-years burdened with heart disease in the last decade. (Oh, and according to senior study author Dr. Kirsten Bibbins-Domingo, “We probably underestimated the incidence, because the rise is greatest among the young, and our model focuses on adults 35 and older.”)

In addition, because the calories come from pure sugar, they may increase our risk of heart disease and diabetes even more, while providing no nutritional benefit. And worst case scenario? These added sugars are a dietary cause of cancer.

In other words, while plenty of things are making us obese, soda is particularly harmful. The question then isn’t whether public health officials should target soda consumption, it’s whether Bloomberg’s proposal is a good way to do it. We’ll look at the ban itself in our next post.