Warning: Use of undefined constant wp_cumulus_widget - assumed 'wp_cumulus_widget' (this will throw an Error in a future version of PHP) in /home/customer/www/whatifpost.com/public_html/wp-content/plugins/wp-cumulus/wp-cumulus.php on line 375
 How states will shape the fate of health reform
≡ Menu

How states will shape the fate of health reform 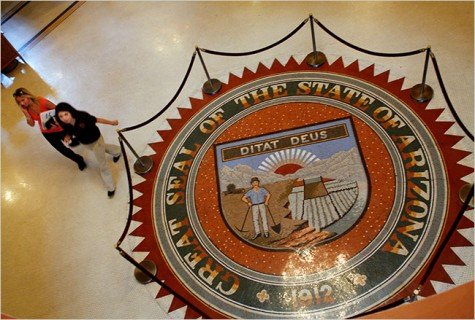 Thomas Edison once said famously, “Genius is 1% inspiration, and 99% perspiration.”  Wilbur Cohen, one of the main architects of Medicare under President Johnson, had his own version of the famous phrase.  Policy, said Cohen, is “1% inspiration and 99% implementation.”  That’s even more true when the policy is as complicated as the new health reform law.

Despite all the talk of a federal takeover of health care, the Patient Protection Act leaves a lot of the responsibility for implementation up to the states.  Unfortunately, as Paul Starr of The American Prospect points out, that includes:

Many [states] where Republican leaders have been hostile to the changes, questioned their constitutionality, and enacted measures to nullify the federal reforms. Although the federal courts are unlikely to uphold these challenges, the same states may resist fulfilling the substantial responsibilities that fall to them under the law. And even some supportive state governments may find it challenging to carry out their role despite the ample federal money they stand to receive.

States have three big responsibilities under the new law:

Here are the ways the states could help make reform work (or screw it up royally):

Establishing Exchanges
When politicians and the media talked about the differences between the House and Senate versions of the health care reform bill, they tended to focus on hot button issues like abortion and the public option.  One key difference got considerably less attention– but may end up being more important.

The biggest potential problem for the health insurance exchanges is the separation of healthier and less healthy people into different insurance arrangements– this is known as adverse selection.  The concern is that a higher number of sick people with high health expenses enroll in coverage through the insurance exchanges, while healthier, lower-cost people largely enroll in plans offered outside the exchanges.  If that occurs, the cost of exchange coverage will be higher than the cost of plans offered in outside markets.

According to a report by the Center on Budget and Policy Priorities (CBPP):

Higher premiums would depress participation in the exchanges by individuals and small businesses, particularly by those people and firms that can obtain better deals in outside markets. That, in turn, could raise premiums even higher in the exchanges and could ultimately result in their failure over time.

The House version of health reform eliminated this problem by stating simply that insurance companies had to sell all their plans on an exchange.  Every individual and small business would be in one pool– no sketchy side market where insurance companies could try to lure only the healthiest customers.

However, the version of the bill that passed still allows plans to be sold outside of exchanges.  It does include a bunch of complicated mechanisms to deal with the adverse selection problem, but unfortunately, as CBPP points out, they’re far from foolproof:

1. Risk-adjustment
Under the risk adjustment system created by the new law, plans with sicker-than-average enrollments receive payments to compensate them for their resulting higher costs.  The payments would come from plans who enroll more healthy people who are cheaper to cover.  This risk-adjustment system will apply to plans both on and off the exchange.  The hope is that risk-adjustment will reduce the incentive for insurance companies to cherry-pick healthier customers, since they’d just have to pay that money back to plans with sicker people.

Unfortunately, risk-adjustment is extremely hard to do accurately, and usually only compensates for some of the difference in costs between healthier and sicker pools.  Insurance companies with healthier populations will probably still make more money, even after factoring in the payments they’ll make to plans with sicker people.

2. Risk pooling
The Affordable Care Act requires insurers to create a “single risk pool,” meaning that each insurer will be required to treat all of its enrollees as a single group when setting premiums.  Insurance companies would then have to charge the same price for the same level of plan regardless of whether it’s sold inside or outside the exchange.

But again, there are loopholes.

3. Stricter rules in the exchanges
Some parts of the new law apply to plans both on and off the exchange- for example, all new health plans will have to provide a package of “essential benefits” and a minimum level of coverage.  Also, no insurance plan will be allowed to deny coverage or charge more based on pre-existing conditions.

But other requirements only apply to plans on the exchanges, including:

This leaves substantial opportunity for adverse selection because insurers in these external markets will effectively be competing for enrollees against the exchange plans, but will not have to comply with standards that are as strict.

How can states address these issues?
Since states are setting up the exchanges, states themselves can close these loopholes in the new law.  Here’s how:

Basically, if the rules for plans both on and off the exchange are the same, insurance companies will find it much harder to cherry pick only healthy customers.

Regulating Insurers
The Patient Protection Act creates a bunch of new federal standards for insurance plans that kick in immediately.  By now you’ve probably heard a lot of them.  Insurance companies:

But it’s up to the states to enforce these new standards, and a number of states say they don’t have the legal authority to enforce federal law.   If they don’t, the federal government could step in.  However, the White House is hoping “states take a lead role in providing consumer protections, with federal enforcement only as a fallback measure.”

One major area of concern is that insurance companies will jack up premiums before the new law goes into effect.  The federal government has some authority to review rate increases, but not much.  States, however, can give themselves power to reject unreasonable rate increases- and the new law gives grants to help states figure out the best way to do it.  In the first round of grants, 45 states received $1 million each.  (But in a possible foreshadowing of opposition to the new law, five states with Republican governors rejected these grants.)

Expanding Medicaid
Another point that sort of flew under the radar in the national health care debate is that most of the people who gain coverage, won’t be covered by private insurance– they’ll be covered under under Medicaid.

Under the new law, anyone making less than 133% of the poverty line will be eligible for Medicaid.  But the number of people who actually end up in the program will depend on how aggressively states promote enrollment.  According to a study by the Kaiser Family Foundation, state recruitment efforts will determine whether or not 6 million people get coverage.

When the Congressional Budget Office was estimating the cost of the bill, they assumed that 57% of those who are now eligible will actually sign up for Medicaid.  Under that scenario:

The Kaiser Family Foundation looked at what would happen if states promoted Medicaid heavily and 75% of newly eligible people signed up:

Still, some states may not push for higher Medicaid enrollment.  Part of the reason might be cost: aggressive promotion would cost states $43 billion through 2019 versus only $23 billion in the CBO’s scenario.  But, it’s important to remember that the federal government is picking up almost the entire tab for new Medicaid enrollees.  Under the CBO’s standard scenario, average total state Medicaid costs will only increase about 1.4% more than they would without reform.  With more aggressive promotion the total state costs would be higher, but still only 2.9% more than without reform.

Also, the more people enroll in Medicaid, the more money states will save in other parts of their health care budget, as the CBS Business Network explains:

States would benefit from higher enrollment because the reform statute reduces the amount of federal reimbursement for charity care that is reimbursed by the states. By bringing more people into Medicaid, states would reduce the shortfall they’d have to cover in their own uncompensated care programs.

Still, some conservative state legislators who oppose health care reform may try to resist implementing any part of the new law– even if, like the Medicaid expansion, it’s a pretty good deal for them.