Warning: Use of undefined constant wp_cumulus_widget - assumed 'wp_cumulus_widget' (this will throw an Error in a future version of PHP) in /home/customer/www/whatifpost.com/public_html/wp-content/plugins/wp-cumulus/wp-cumulus.php on line 375
 All the possible ways the Supreme Court could rule in its upcoming Obamacare decision
≡ Menu 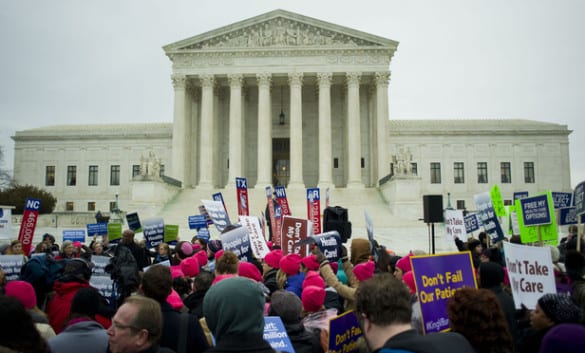 With the Supreme Court set to issue a decision tomorrow or Monday in the latest Obamacare case– this one over federal subsidies that help 6.4 million Americans afford coverage— we figured it’s a good time to take another look at what the case is about and all the different ways the court could rule.

[For regular readers, some of this might look familiar.]

As you’ve (hopefully) heard by now, this case is not about the constitutionality of Obamacare– at least not directly. Instead, this new case is about deciding what Congress meant in a poorly worded section of the law’s text.

Section 1311 of the Affordable Care Act creates health insurance exchanges in every state. States are supposed to run their own, but if they don’t, Section 1321 says that the federal government will step in and set up an exchange for them. The problem is that another section, which outlines who’s eligible for help paying premiums, refers only to people who enroll “through an Exchange established by the State”– there’s no mention of federally-run exchanges.

One explanation is that it’s simply a drafting error. (This would make sense, since there are a bunch of other places where the law refers to exchanges “established by a state” and it clearly means the federal exchange too.) If that’s the case, the court would simply defer to Congress and uphold the subsidies. So instead, the plaintiffs offered an alternative explanation: the provision is worded perfectly. They say that Congress intended to withhold subsidies on federal exchanges as a way to coerce states into creating their own.

It’s an argument that makes no sense. In the debate leading up to the law’s passage, no one in Congress mentioned withholding subsidies, which is odd because, as Ezra Klein puts it, “it is an absolutely insane policy idea.” (It would basically destroy the individual insurance market in any state that didn’t create its own exchange.) New York Times health reporter Robert Pear interviewed “more than two dozen Democrats and Republicans involved in writing the law […] None supported the contention of the plaintiff.”

Still, there’s no telling how the Supreme Court– which has a majority of Republican appointees– will rule, so it’s worth looking at all the ways it could decide.

In a 1984 case, Chevron v. Natural Resources Defense Council, the Supreme Court ruled that if Congress’s intent is unclear from the text of a law, the agency implementing the provision gets to decide what Congress meant (as long as the agency’s interpretation is reasonable). In this case, the agency that made the call is the IRS (the premium subsidies come in the form of tax credits). Applying the Chevron doctrine to this case, the court could simply accept the IRS’s reasonable interpretation that yes, Congress did intend for subsidies to be available on the federal exchange.

The court wouldn’t consider issues raised by other possible answers, thanks to a longstanding legal doctrine called “constitutional avoidance,” which says that courts should only rule on constitutional questions if they have to.

Possible ruling 2: The IRS doesn’t have authority to decide, but Congress did intend to provide subsidies

Two key justices– Kennedy and Roberts– might be considering using this case to limit the Chevron doctrine. As David Savage of the L.A. Times points out:

Similarly, in the oral arguments of the current case, Kennedy indicated that he’s also considering limiting the Chevron rule:

Well, if it’s– ­­ if it’s ambiguous, then we think about Chevron. But it seems to me a drastic step for us to say that the Department of Internal Revenue and its director can make this call one way or the other when there are, what, billions of dollars of subsidies involved here?  Hundreds of millions? And it– ­­ it seems to me our cases say that if the Internal Revenue Service is going to allow deductions using these, that it has to be very, very clear.

If the court believes that Congress’s intent is unclear, but that Chevron shouldn’t apply because Congress never meant for the IRS to make such an important call, then it would be up to the court to rule on the subsidies. If the court says yes, Congress did intend to provide them, the subsidies still stand.

Possible ruling 3: The IRS doesn’t have the authority to decide, and Congress did not intend to provide subsidies on the federal exchange

If the Court believes that Congress did not intend to provide subsidies on the federal exchanges, it could simply strike them down. Plaintiffs win.

Possible ruling 4: Congress did not intend to provide subsidies, but that raises constitutional questions

During the hearing, Kennedy wondered whether, if Congress did mean to withhold subsidies in order to get states to build their own exchanges, would that amount to unconstitutional coercion from the federal government?

Speaking to the plaintiffs’ lawyer, he said:

How the government could win: Again under the doctrine of constitutional avoidance, if an interpretation (that Congress did intend to withhold subsidies) would be unconstitutional (i.e., the consequences for states failing to create exchanges are too coercive), the Court should interpret the statute in a different way– one that is constitutional. In other words the subsidies would stand.

How the plaintiffs could win: Another possibility, if the court believes that the threat to withhold the subsidies is unconstitutional, is a point that Scalia brought up:

What Scalia seems to be saying is that if the court believes that Congress clearly intended to withhold subsidies, it can’t simply interpret the law the other way to make it constitutional. That would amount to the court “rewriting” the law, which would be unprecedented. What the court normally does in cases where a provision is clearly unconstitutional is strike that provision, or– if it can’t be separated from other provisions– striking the entire law.

On the one hand, it’s hard to imagine the court striking down the subsidies. Doing so would mean ruling that Congress basically intended to sabotage its own law, with pretty much zero evidence that this is the case. If Roberts were going to make such a blatantly partisan move to gut the ACA, it seems he would have done it last time around; plus it’s unlikely he would make a move that’s so anti-business now. But on the other hand, it’s troubling that the court even took this case in the first place. The lower courts were all set to rule that the subsidies should stand, and when the lower courts agree, the Supreme Court usually only gets involved if it’s considering overturning something.

Our guess is that the court will rule to uphold the subsidies, but in a round-about way, by saying that the text isn’t clear on Congress’s intent. The justices will say that the IRS didn’t have the authority to interpret the law (limiting the Chevron doctrine), or that the coercion is unconstitutional, so under the doctrine of constitutional avoidance the subsidies stand (unconstitutional coercion only really became a thing in the last Obamacare case– this case could be a way to reinforce that decision’s transfer of power to the states).

Next post: The Supreme Court upholds Obamacare subsidies! Here’s why it did.

Previous post: Three studies that show why it’s so hard to figure out what foods you “should” be eating