Warning: Use of undefined constant wp_cumulus_widget - assumed 'wp_cumulus_widget' (this will throw an Error in a future version of PHP) in /home/customer/www/whatifpost.com/public_html/wp-content/plugins/wp-cumulus/wp-cumulus.php on line 375
 Health Reform Passes!
≡ Menu 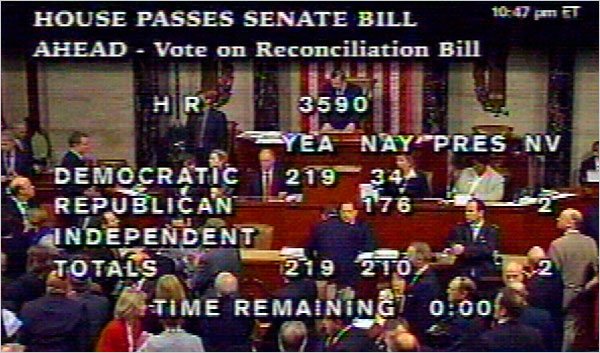 Late last night, the House of Representatives voted to approve the health care reform legislation passed by the Senate, with a vote of 219-212.  Addressing the country after the historic vote, President Obama said:

Tonight, after nearly 100 years of talk and frustration, after decades of trying, and a year of sustained effort and debate, the United States Congress finally declared that America’s workers and America’s families and America’s small businesses deserve the security of knowing that here, in this country, neither illness nor accident should endanger the dreams they’ve worked a lifetime to achieve.

You can watch the entire speech here:

Plenty of people have already written about why the passage of this bill is important.  In particular, we like what James Fallows had to say in The Atlantic about Why This Moment Matters:

We think it’s fitting that in its very next act, the House voted to improve the bill with a package of reconciliation fixes, that the Senate will vote on this week.  This legislation won’t be the end of health care reform– but it is a big step forward and something that can be built on in the future.   Or as President Obama said last night:

This isn’t radical reform. But it is major reform. This legislation will not fix everything that ails our health care system. But it moves us decisively in the right direction. This is what change looks like.