Warning: Use of undefined constant wp_cumulus_widget - assumed 'wp_cumulus_widget' (this will throw an Error in a future version of PHP) in /home/customer/www/whatifpost.com/public_html/wp-content/plugins/wp-cumulus/wp-cumulus.php on line 375
 Health reform in the Supreme Court, Part 4: The Medicaid expansion
≡ Menu

Health reform in the Supreme Court, Part 4: The Medicaid expansion 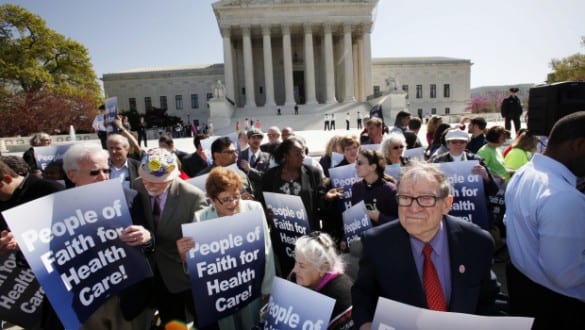 The Supreme Court wrapped up oral arguments on health reform by looking at whether the law’s proposed Medicaid expansion unfairly coerces states.

We were surprised to hear that the Court was even examining this issue. Every lower court (even the most conservative) ruled that the Medicaid expansion is constitutional. And a decision against the expansion could, as Justice Sotomayor pointed out, tie the government’s hands in dealing with some of the biggest problems our nation faces.

Currently, Medicaid is a government program that provides health coverage for some poor people. States each run their own Medicaid program, and split the cost with the federal government. The federal share is based on per capita income, and can be anywhere from 50% up to a maximum of 83%. (In a higher income state like California, the feds pay only half the Medicaid costs, while in Mississippi the federal share is 74%.)

Medicaid is voluntary– states don’t have to participate, but they all do. To receive federal money, states have to cover certain categories of poor people: children, pregnant women, and people with disabilities, for example. Some states have chosen to expand the program beyond these minimum requirements, but many have not.

What is the Medicaid expansion?

The health reform law expands Medicaid to cover anyone making less than 133% of the poverty line. So while before, only certain categories of poor people could get Medicaid, starting in 2014, anyone who makes less than $14,856 (or less than $29,000 for a family of four) will be eligible. The Congressional Budget Office estimates that 15 million more people will now be covered by the program.

To avoid placing an unreasonable burden on cash-strapped states, the federal government will pay for nearly all the additional cost– in the first three years they’ll pay for 100% of it, and eventually that will phase down to 90%.

To show how good a deal this is for states, Anthony Wright of Health Access California compares it to the CHIP program established under President Clinton:

In practice, the states will recognize the deal and take it. The State Child Health Insurance Program was created over ten years ago and voluntarily offered states the option to cover children just above the poverty level, with the federal government providing a two-to-one match. Some states expanded coverage more than others, but all took up the offer in one way or another. The health reform offers a nine-to-one match–that is, an even better deal.

Rather than accepting the government’s offer, though, Republican attorney generals of 26 states sued, saying that the expansion is unfairly coercive.

What each side is arguing

The states’ argument is that although their participation in Medicaid is technically voluntary, they get so much money from the program that they’re now totally dependent on it. That leaves them no choice but to accept the new terms imposed by Congress.

Paul Clement, lawyer for the states, put it this way:

“How any state at this point could say, ‘We’re just going to turn down Medicaid funding from the federal government’ — I don’t think any set of citizens would allow that to happen. Because it’s all this money that’s being taken from the state taxpayers that would then be going to every state in the union but that state; it just wouldn’t work.”

The government’s argument says that just because a choice is politically difficult, that doesn’t make it unconstitutional. They point out that Congress has expanded Medicaid eligibility several times in the past, requiring states to cover new categories of people (pregnant women and children for example). Just as with the current expansion, states had to go along with these new terms or risk losing federal funding.

The states face an uphill battle. No federal court has ever ruled that states have been unlawfully coerced when they accept strings attached to federal funds.

In fact, a major Supreme Court case in 1987, South Dakota v. Dole, reaffirmed Congress’s constitutional right to put conditions on federal money. In that case, Congress had passed a law saying that 5% of a state’s federal highway funds would be withheld if a state did not make its minimum drinking age 21 (in some states the drinking age had been 18). The Court upheld the law, saying that Congress can attach terms to federal money, so long as those terms meet four conditions:

The Medicaid expansion passes each of those requirements with flying colors.

The Dole decision did say it was possible that some future financial incentive which passes those tests might be unconstitutional coercion. However, none of the lower courts found that to be the case with the Medicaid expansion. For example, the 11th Circuit Court of Appeals gave plenty of reasons why the new law is not coercive:

What will the Supreme Court Decide?

The oral arguments were troubling, because it sounds like conservative justices are at least considering striking the Medicaid expansion.

It still seems unlikely that they will though. If the justices accept the states’ argument that the sheer size of the program makes it coercive, the decision could have dire consequences beyond just health reform. It could mean changes to the Civil Rights Act, the Clean Air Act, or really any program where the federal government gives money to the states with conditions attached.

Both lawyers had an opportunity to make a closing statement, wrapping up their entire case. Donald Verrilli, the Solicitor General who stumbled in his defense of the individual mandate, used his time to remind the justices that the health coverage of 30 million Americans was at stake. Jonathan Cohn of The New Republic described it eloquently:

Verrelli closed his remarks with a soliloquy, tying together discussion of both the Medicaid expansion and the minimum coverage requirement. After acknowledging that the case was about liberty, he told the court that access to life-sustaining health care and freedom from crushing are also forms of liberty.

It was his best moment in the entire three days of hearings: He pointed out the consequences of repealing part while reminding the justices that judgments about good policy, the kind the justices made frequently during oral arguments, are best left to Congress.

Whether the justices paid attention, or even cared, I cannot say.

Next post: Why Obama’s Supreme Court comments made sense

Previous post: Health reform in the Supreme Court Part 3: If the mandate falls, will the rest of the law go with it?