Warning: Use of undefined constant wp_cumulus_widget - assumed 'wp_cumulus_widget' (this will throw an Error in a future version of PHP) in /home/customer/www/whatifpost.com/public_html/wp-content/plugins/wp-cumulus/wp-cumulus.php on line 375
 Health reform in the Supreme Court, Part 2: Key questions about the mandate
≡ Menu

Health reform in the Supreme Court, Part 2: Key questions about the mandate 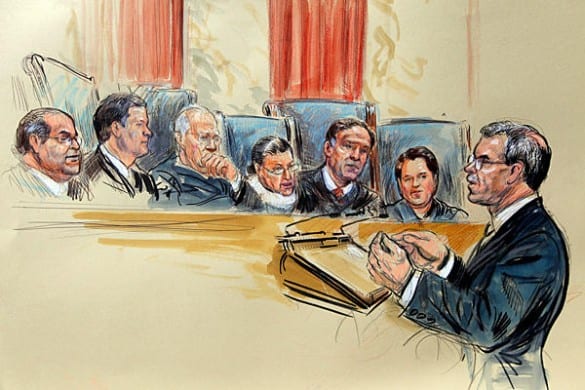 Last Tuesday, the Supreme Court heard arguments about the most important part of the legal challenge to health reform: whether or not the individual mandate is constitutional. By nearly all accounts it was a bad day for the White House and for supporters of health reform.

Many people are blaming President Obama’s Solicitor General, Donald Verrilli– reviews of his performance range from “awful” to “one of the most spectacular flameouts in the history of the court.” (That’s probably going too far– he was terrible at the start, but got better as the hearing went on.)

But there’s some evidence that oral arguments don’t matter much in high profile Supreme Court cases. The bigger problem for the White House was that questions from certain justices seemed to indicate a leaning towards overturning the law. In this post, we’ll look at three key questions asked during the hearing– the fate of health reform will hinge on their answers.

1. Can Congress create commerce in order to regulate it?

Justice Kennedy asked this question right off the bat, which is worrying because it’s exactly how the challengers’ lawyer, Paul Clement, framed the issue:

Kennedy’s query was an almost verbatim recital of Clement’s own talking point, part of the fundamental argument he has made against the individual mandate. In his brief to the Court, and later during his oral argument, he said Obama’s health-care law “represents an unprecedented effort by Congress to compel individuals to enter commerce in order to better regulate commerce.”

This was a smart way of rephrasing the original argument against the mandate: that it’s unconstitutional because it regulates inactivity rather than activity. The problem with that argument is that the Constitution and nearly 200 years of case law don’t make that distinction. Harvard Law professor Charles Fried explains:

So to get around the fact that Congress has very broad powers to regulate commerce, Clement argues that the government is forcing people into commerce so that it can regulate them.

The government counters by saying they’re not forcing anyone into commerce– everyone is already in the healthcare market, and if they’re not, they will be someday. Fried explains further:

Congress creating the market in order to regulate it? It’s not creating it! The market is there! Is it forcing people into it in order to regulate them? In every five-year period, 95 percent of the population is in the health-care market. Now, it’s not 100 percent, but I’d say that’s close enough for government work. And in any one year, it’s close to 85 percent. Congress isn’t forcing people into that market to regulate them. The whole thing is just a canard that’s been invented by the tea party and [libertarian law professor] Randy Barnetts of the world, and I was astonished to hear it coming out of the mouths of the people on that bench.

[ We should point out that Fried is no bleeding-heart liberal: he served as Solicitor General under Ronald Reagan, and testified in support of appointing John Roberts and Samuel Alito to the Supreme Court.]

“Well, doesn’t that seem a little bit, Mr. Clement, cutting the bologna thin? I mean, health insurance exists only for the purpose of financing health care. The two are inextricably interlinked. We don’t get insurance so that we can stare at our insurance certificate. We get it so that we can go and access health care.“

2. Assuming the law is unprecedented, doesn’t the government have a heavy burden of justification?

This was another question from Justice Kennedy, which is troubling for a couple reasons. First, calling the mandate is unprecedented is dead wrong. In a fantastic article for The Daily Beast, Harvard law professor Einer Elhauge writes:

In fact, the challengers’ claim is completely false. In 1790, the very first Congress (which included 20 framers of the Constitution, in case Justices Thomas and Scalia are counting), enacted a law requiring shipowners to buy medical insurance for seamen. The law was signed by another notable framer: President George Washington. Congress followed this with a 1792 law requiring all able-bodied citizens to buy a firearm, and a 1798 law requiring seamen to buy hospital insurance for themselves. Today, there are a host of affirmative federal duties to buy things. For example, federal law requires corporations to hire independent auditors, and requires unions to buy insurance bonds in case their officers engage in fraud. The list goes on.

In all these cases (other than the firearms case), one could say the federal duty was imposed on persons who are already engaged in some commerce. But that is also true of everyone subject to the health-insurance mandate, because all of us buy or sell something. And yet in each case, Congress required people to enter into commerce in a different market than the one in which they voluntarily operate, which is precisely what the health-care law’s challengers claim makes this mandate “unprecedented.”

It’s also hard to see how the mandate is unprecedented, when even the law’s opponents agree that the mandate would be constitutional if Congress had called it a “tax” or “tax credit” instead of a penalty. Elhauge puts it this way:

It is hard to assert that “this mandate fundamentally alters the relationship of individual to government” and at the same time admit that “it would all be hunky dory if the mandate [simply] used different language.”

In any case, while Kennedy calling the mandate unprecedented was troubling, it was probably more disturbing to hear him place the “heavy burden of justification” on the government. Since the 1930’s, the Supreme Court has recognized that national economic problems require national solutions, and deferred to Congress on what means it uses to solve those problems. As The New Yorker’s Jeffrey Toobin writes:

Justice Kennedy had it backward. The “heavy burden” is not on the defenders of the law but on its challengers. Acts of Congress, like the health-care law, are presumed to be constitutional, and it is—or should be—a grave and unusual step for unelected, unaccountable, life-tenured judges to overrule the work of the democratically elected branches of government.

Opponents of the law and the conservative justices say that the Supreme Court may need to stop Congress here, because if Congress has the power to make you buy insurance, where does that power end? Can Congress make you buy anything?

The answer should be obvious: of course not, in the same way that the power to tax doesn’t mean that Congress will one day take 100% of your income. Still, this third question- “What is the limiting principle?” will be extremely important to the Supreme Court decision. We’ll look at it more in depth in our next post.

Next post: Health Reform in the Supreme Court, Part 2 cont’d: The broccoli question

Previous post: Health reform in the Supreme Court, Part 1: When is a tax not a tax?