Warning: Use of undefined constant wp_cumulus_widget - assumed 'wp_cumulus_widget' (this will throw an Error in a future version of PHP) in /home/customer/www/whatifpost.com/public_html/wp-content/plugins/wp-cumulus/wp-cumulus.php on line 375
 Health Reform in the Supreme Court, Part 2 cont’d: The broccoli question
≡ Menu 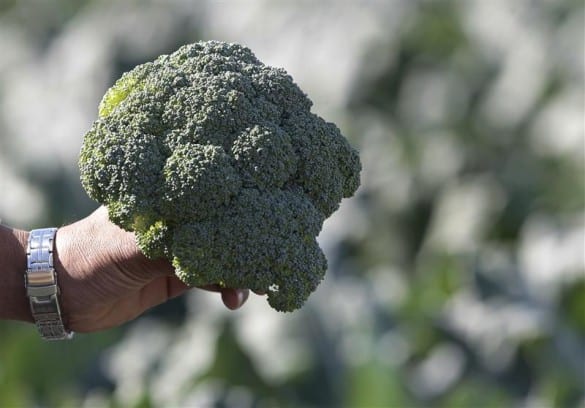 Yesterday we looked at two of the key questions Supreme Court justices asked about the individual mandate:

But there was a third question, which might be the most important to the future of reform.

This is where the government’s Solicitor General, Donald Verrilli, gave his worst answer. Justice Samuel Alito asked Verrilli to express his “limiting principle”— in other words, the principle under which it would be ok for the government to make people buy insurance, but not ok to make them buy other goods and services– as succinctly as he possibly could. Here’s Verrilli’s not-so-succinct response:

GENERAL VERRILLI: We got two and they are — they are different. Let me state them. First with respect to the comprehensive scheme. When Congress is regulating — is enacting a comprehensive scheme that it has the authority to enact that the Necessary and Proper Clause gives it the authority to include regulation, including a regulation of this kind, if it is necessary to counteract risks attributable to the scheme itself that people engage in economic activity that would undercut the scheme. It’s like — it’s very much like Wickard in that respect, very much like Raich in that respect.

With respect to the — with respect to the — considering the Commerce Clause alone and not embedded in the comprehensive scheme, our position is that Congress can regulate the method of payment by imposing an insurance requirement in advance of the time in which the — the service is consumed when the class to which that requirement applies either is or virtually is most certain to be in that market when the timing of one’s entry into that market and what you will need when you enter that market is uncertain and when — when you will get the care in that market, whether you can afford to pay for it or not and shift costs to other market participants.

So those — those are our views as to -­those are the principles we are advocating for and it’s, in fact, the conjunction of the two of them here that makes this, we think, a strong case under the Commerce Clause.

Catch that? There actually was an answer in there. Verrilli basically just defined “health insurance” (without saying those words)– and said that Congress could only compel people to buy services that meet that definition.

Unfortunately it’s hard to pick out an underlying principle in Verrilli’s answer, if there is one. There are, however, a few better arguments supporters of the law can make in response to the broccoli question.

1. Health insurance is different from broccoli

Jack Balkin, a professor of constitutional law at Yale, was frustrated by Verrilli’s (non)answer, and offered not just one, but three limiting principles that distinguish health insurance from broccoli. For example:

Hey kids? Are you down in the dumps after Tuesday’s oral argument? Do you want a limiting principle that justifies the individual mandate but doesn’t give Congress unlimited power under the Commerce Clause? Fine. Here are three of them. Pick your favorite.

1. The Moral Hazard/Adverse Selection Principle. Congress can regulate activities that substantially affect commerce. Under the necessary and proper clause, Congress can require people to engage in commerce when necessary to prevent problems of moral hazard or adverse selection created by its regulation of commerce. But if there is no problem of moral hazard or adverse selection, Congress cannot compel commerce.  Courts can choose different standards of review to decide how much they want to defer to Congress’s conclusion. Even under the strictest standard of review the individual mandate passes muster.

Explanation:  The guaranteed issue and community rating rules prevent insurers from discriminating against uninsured people because of preexisting conditions. These rules create a moral hazard: people will wait until they get sick to buy insurance (this might be better described as an adverse selection problem).  Congress can require them to buy insurance early to prevent gaming the system.

Why not broccoli? There is no moral hazard or adverse selection problem created when people refuse to buy broccoli. It’s true that buying and eating broccoli might make you healthier, but people don’t wait until they are sick to buy broccoli. That’s because broccoli is not going to do them much good at that point. In this sense, broccoli doesn’t work like health insurance.

[We definitely recommend reading Balkin’s entire post for the other two limiting principles.]

2. Even if Congress could require broccoli purchases, it doesn’t mean they will

The most important limit, the one we fought the Revolutionary War for, is that the people doing this to you are the people you elect. That’s the main check. The broccoli argument is like something they said when we were debating the income tax: If they can tax me, they can tax me at 100 percent! And yes, they can. But they won’t. Because you could vote them out of office. They have the power to do all sorts of ridiculous things that they won’t do because you’d vote them out of office. If they can prevent me from growing pot, can they prevent me from buying broccoli? Perhaps, but why would they if they want to be reelected?

3. The mandate doesn’t really “make” people do anything

Under the mandate it will still be perfectly legal to go without insurance– you simply have to pay a penalty (which, by the way, is much less than the cost of buying insurance). The New Republic’s Jonathan Cohn explains further:

To be clear, the mandate doesn’t actually apply to all people: It exempts people who object to medical care for religious regions. And the penalty is mild: It exempts people who can’t afford to buy coverage, adjusts to income, and carries no criminal sanction for non-compliance. At worst, the government can withhold future income tax refunds.

The whole premise of the lawsuit against the mandate is that it’s a “command” to buy insurance. But the penalties are so weak you could make the case that it’s not a command at all, but simply a financial incentive to buy something— which, whether it’s insurance, a house, or even broccoli, is easily constitutional.

Next post: Health reform in the Supreme Court Part 3: If the mandate falls, will the rest of the law go with it?