Warning: Use of undefined constant wp_cumulus_widget - assumed 'wp_cumulus_widget' (this will throw an Error in a future version of PHP) in /home/customer/www/whatifpost.com/public_html/wp-content/plugins/wp-cumulus/wp-cumulus.php on line 375
 Health reform in the Supreme Court, Part 1: When is a tax not a tax?
≡ Menu

Health reform in the Supreme Court, Part 1: When is a tax not a tax? 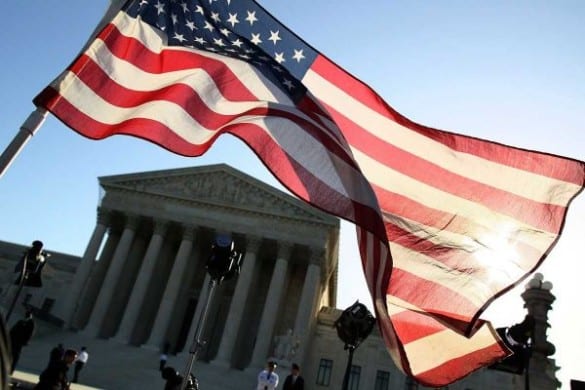 President Obama’s health care reform law had it’s long-awaited day in court this week. Well, actually it had three days, because there are four separate legal issues the Supreme Court has to settle:

First up, on Monday, was the question of whether a law passed nearly 150 years ago prevents the Supreme Court from making a decision about health reform now.

What is the Anti-Injunction Act and why does it matter?

The Anti-Injunction Act (AIA) is a law passed in 1867, which says that a tax can’t be challenged in court until someone has actually had to pay it. Since no one will have to pay the tax/penalty for not having health insurance until 2015, the question is whether the Supreme Court should even hear the case now.

Oddly, both the government and the challengers argued that the AIA doesn’t apply to this case, so the Court appointed an outside lawyer, Robert Long, to argue why it should.

Questions the Court has to answer

1. Is the AIA jurisdictional? If the law is “jurisdictional,” it would keep the courts from hearing any legal challenge, even if neither side objects. If it’s not jurisdictional, the government could waive its right to cite the AIA whenever both sides want a case to go forward.

2. Is it jurisdictional, except in special cases? In other words, maybe the AIA does prevent the courts from hearing legal challenges over tax issues too soon– even if both sides want one to go forward– but there might be exceptions. The Court would then have to figure out some guideline for determining when the AIA does not apply.

What did each side argue?

Both the government and the challengers argued that this is a special case where the AIA shouldn’t apply… although for slightly different reasons.

Gregory Katsas, lawyer for the challengers, argued two points. First, he argued that exceptions have been made to the AIA before, citing a Supreme Court case from 1937 that upheld Social Security– that case went to court before the tax was ever paid. Katsas said the decision showed “there may be some cases including, for instance, constitutional challenges to landmark federal statutes, where the government sensibly decides that its revenue-raising purposes are better served by allowing a party to come into court and waiving its defense.”

Katsas also tried to argue that this is a special case, because his clients aren’t challenging the financial penalty, only the mandate itself. This reasoning doesn’t make a ton of sense, since the financial penalty is the only consequence of not getting insurance. As Justice Roberts pointed out, “[Without the penalty] what happens if you don’t fill the mandate? And the answer is nothing.”

Donald Verrilli, the government’s Solicitor General, had to make a weird argument on this issue, as Amy Howe, who covers the Supreme Court for Bloomberg’s SCOTUSblog, explains:

The government had argued at the beginning of the lawsuits over the health care law that the AIA bar did apply; but it later changed its position and it wants the Court to hold that the AIA does not apply in this particular case, so that the Court can proceed to consider the constitutionality of the mandate on its merits. But at the same time, it wants the AIA bar to continue to apply to basically all other tax challenges. This stance required the government in its brief to play something of the legal equivalent of a game of Twister.

As weird as that may sound, the justices seemed ok with it, for reasons Justice Ginsburg explained:

The Tax Injunction Act does not apply to penalties that are designed to induce compliance with the law rather than to raise revenue. And this is not a revenue-raising measure, because, if it’s successful, they won’t — nobody will pay the penalty and there will be no revenue to raise.

In other words, the AIA is meant to protect the ability of the government to raise money efficiently– but the mandate isn’t a tax meant to raise money, it’s a way to get people to buy insurance.

Robert Long, a court-appointed lawyer, argued that AIA should bar all tax cases before a tax has been paid– otherwise the IRS could face a flood of new lawsuits, creating a huge legal mess any time they try to collect taxes. Some justices didn’t seem to buy this, saying that federal judges would be smart about which lawsuits could go forward.

How will the Supreme Court rule?

Guessing what the Supreme Court will do these days is pretty much impossible. Still, based on the tone of their questions, it sounds like they’re ready to side with the government on this one. If they do, that means they’ll settle the mandate issue now, instead of ducking it for another three years.

That’s it for our summary of the first day. But if you’re really interested in hearing justices argue over boring old 19th century statutes just for the fun of it, NPR has the audio and a full transcript.

Next post: Health reform in the Supreme Court, Part 2: Key questions about the mandate