Warning: Use of undefined constant wp_cumulus_widget - assumed 'wp_cumulus_widget' (this will throw an Error in a future version of PHP) in /home/customer/www/whatifpost.com/public_html/wp-content/plugins/wp-cumulus/wp-cumulus.php on line 375
 Health costs wiped out a whole decade of income increases
≡ Menu

Health costs wiped out a whole decade of income increases

A new study in the journal Health Affairs shows that while Americans are making more money, nearly all of that extra income is going towards the increased cost of health care:

This picture could look a lot different. If health costs grew just 1 percent faster than inflation, for example, the same family would have $335 more in available earnings each month. Get health costs to keep pace with inflation and you’re looking at a $545 bump in monthly income (ignore the blue bars): 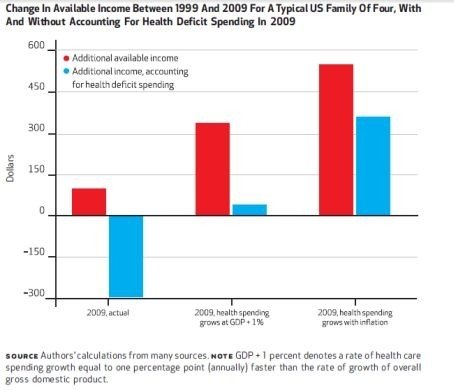 Next post: A response to Mad As Hell Doctor Sam Metz