Warning: Use of undefined constant wp_cumulus_widget - assumed 'wp_cumulus_widget' (this will throw an Error in a future version of PHP) in /home/customer/www/whatifpost.com/public_html/wp-content/plugins/wp-cumulus/wp-cumulus.php on line 375
 Health costs rise, coverage falls… but there is some good news
≡ Menu

Health costs rise, coverage falls… but there is some good news

Regular readers of What If Post probably won’t find this all that shocking, but The Los Angeles Times reports on two recent studies which find that families’ health costs have risen while coverage fell.

First, according to a survey by the nonprofit Commonwealth Fund:

An estimated 29 million adults who had health insurance lacked adequate coverage in 2010, leaving them exposed to medical expenses such as high deductibles that they couldn’t afford.

That is up from 16 million underinsured people in 2003, the survey found, underscoring the rising burden that insurance plans are placing on consumers as the industry raises required co-pays and deductibles.

Combine that with an increasing number of workers who have lost coverage, and that’s 44% of U.S. adults who were uninsured or underinsured last year.

Meanwhile, a study by the Rand Corporation found that:

The typical family of four with employer-based coverage saw its total monthly healthcare tab almost double between 1999 and 2009 — from $805 to $1,420.

Over the same period, total monthly income grew only 30%, barely keeping pace with inflation, which pushed up prices 29% over the decade.

“Even a typical family with employer-provided insurance is just barely treading water,” said David Auerbach, the lead author of the study, also published in Health Affairs.

Ugh. But there was at least one bit of good news about insurance coverage in the last week. Census figures report that the number of 18-24 year olds without insurance actually decreased from 2009 to 2010, which is the opposite of what happened for every other age group: 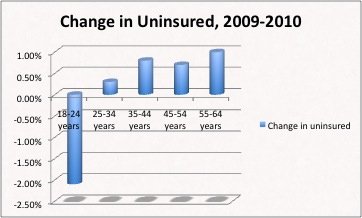 Nobody can be certain why right now, but The New Republic’s Jonathan Cohn points out that circumstantial evidence suggests very strongly that the Affordable Care Act is the primary reason:

Remember, one of the first provisions to take effect was a requirement that insurers allow young adults, up to age 26, to stay on their parents’ policies if employer-sponsored insurance is not available. Even though that requirement didn’t kick in until the fall, several insurers began offering such coverage earlier, in anticipation of the new rule. Media reports, like this one from Kaiser Health News, have suggested large numbers of young people are signing up for the newly available coverage, even more quickly than the government had anticipated.

Of course, the young adult provision is just one small part of the new health care law. The really big increases in insurance coverage won’t happen until 2014, when Medicaid expands to cover a much larger proportion of the low-income population and the federal government begins offering subsidies, plus the opportunity to buy regulated coverage through new insurance exchanges, to middle class people who can’t get employer coverage.

So there is some light at the end of the tunnel for the growing number of uninsured and uninsured.