Warning: Use of undefined constant wp_cumulus_widget - assumed 'wp_cumulus_widget' (this will throw an Error in a future version of PHP) in /home/customer/www/whatifpost.com/public_html/wp-content/plugins/wp-cumulus/wp-cumulus.php on line 375
 Great graph about health care and debt
≡ Menu

There’s not much we like more than a good graph.  You might remember a couple months ago we talked about the best health care graph we’ve seen.  It shows how the cost of health care per person in the United States is more than double what other industrialized countries pay, yet our life expectancy is lower than average, and we see the doctor less often.

Recently we discovered another great graph- this one from the Center for Economic and Policy Research– that shows what our extremely high health care costs mean for the national deficit.  Check it out: 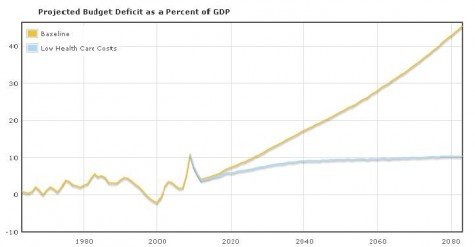 Medicare, Medicaid, and CHIP make up 21% of the federal budget– that’s more than we spend on Social Security or defense.  And so, when health care costs are high it has a huge impact on the budget.  The yellow line shooting up is the budget projection from the Congressional Budget Office assuming that health care costs continue to rise as fast as they have in recent years.  As you can see, by around 2060, the budget deficit would be an enormous 30% of our GDP– that’s trillions of dollars we would owe every year.

The light blue line shows the CBO’s “low cost projection”– that is, if health care costs were to rise only because of the aging of the population (the baby-boomers getting older), but stayed even with inflation.  (Lately health care costs have been growing at twice the rate of inflation.)  In this scenario, we’d still be looking at a deficit that’s 10% of the GDP- it’s still not great.

Now look at what happens if we plug other countries’ per capita health care spending into our budget picture.  In other words this is what the deficit would look like if we spent the same amount on health care per person as Germany, France, Canada, or England: 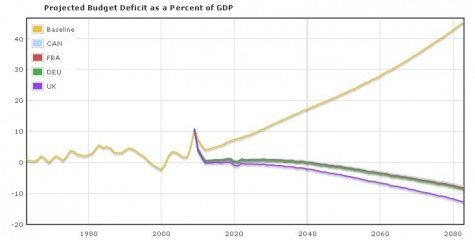 Our deficit problem would disappear completely! (Anything below zero on the graph is a surplus.)

Unfortunately, as Washington Post blogger Ezra Klein notes, it’s almost impossible to imagine how we get there from here:

The wrenching, agonizing process that got us the Affordable Care Act was attached to a pretty modest bill that was careful not to strike at the core of our system. And anytime anyone suggested arming the bill with more dramatic reforms — converting the employer-tax exclusion to a standard deduction, or adding a strong public option into the market — the politicians recoiled, and quick.

There’s a lot in the Affordable Care Act that should bring down health care costs and help reduce our long term deficit (we pointed out a bunch in an earlier post).  But the goal of all these reforms was simply to “bend the cost curve,” i.e. make the budget picture look more like the blue line in the graph above.

If politicians are genuinely concerned about reducing the deficit, a strong public option would be a great place to start-the nonpartisan Congressional Budget Office estimates that a strong public option could save $68 billion between 2014 and 2020.  Soon, those in Congress will get a chance to put their money (or I guess in this case, our money) where their mouth is: a coalition of 128 House Democrats is pushing to reconsider the public option. We’ll have more on that in an upcoming post.