Warning: Use of undefined constant wp_cumulus_widget - assumed 'wp_cumulus_widget' (this will throw an Error in a future version of PHP) in /home/customer/www/whatifpost.com/public_html/wp-content/plugins/wp-cumulus/wp-cumulus.php on line 375
 Good news for Obamacare!
≡ Menu 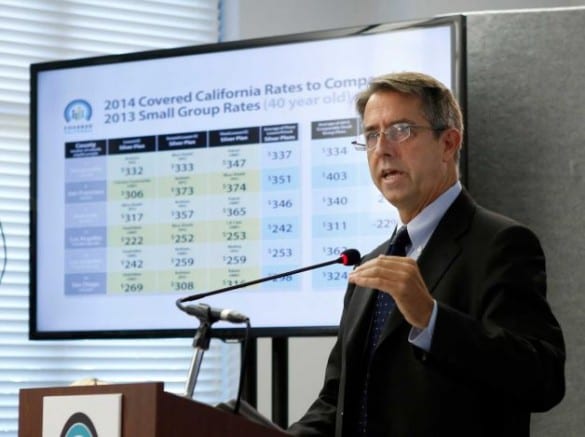 All too often, the news coming out of the health care world is depressing: skyrocketing medical costs, disfunction in Congress, price-gouging from hospitals, gun violence, the obesity epidemic… the list goes on. And so we thought we’d share a bit of good news as you head into the holiday weekend:

In 2009, the Congressional Budget Office predicted that a medium-level “silver” plan — which covers 70 percent of a beneficiary’s expected health costs — on the California health exchange would cost $5,200 annually. More recently, a report from the consulting firm Milliman predicted it would carry a $450 monthly premium. Yesterday, we got the real numbers. And they’re lower than anyone thought.

As always, Sarah Kliff has the details. The California exchange will have 13 insurance options, and the heavy competition appears to be driving down prices. The most affordable silver-level plan is charging $276-a-month. The second-most affordable plan is charging $294. And all this is before subsidies. Someone making twice the poverty line, say, will only pay $104-a-month.

Also, remember that while subsidies are based on the silver level, people who are eligible can apply them to bronze level plans, which are less comprehensive (covering 60% of enrollees’ healthcare costs), but even cheaper. Adults under 30 can buy catastrophic coverage for even less. Kaiser Health News reports that, for-example, a 25-year-old in Los Angeles could choose a Health Net catastrophic plan for $117 a month or a more comprehensive bronze plan for $147 a month from L.A. Care. If that 25-year-old were eligible for subsidies, say making twice the poverty line, their bronze or catastrophic coverage would be free.

Not only is this great news for California consumers, it’s good for the federal government too. The cost of subsidies is pegged to the cost of the second cheapest silver plans in each market– if all those plans came in $2,000 cheaper than the CBO estimates like in California, the Affordable Care Act will cost much less than anyone expected (meaning the Medicare savings and taxes on the wealthy that pay for it will knock even more off our deficit).

And it’s not just California where Obamacare seems to be working:

We’re beginning to see competition drive down proposed rates in some exchanges around the country. Remember Maryland, where CareFirst grabbed headlines with a shocking 25 percent proposed increase in rates? More plans have streamed in with lower bids. Kaiser Permanente, for instance, is only increasing its rates next year by 4.3 percent — a modest increase that will make CareFirst’s proposal almost impossible to sustain. My guess is when the exchange actually opens in October, CareFirst will have dropped its price substantially. If they don’t, then Kaiser and others will grab all the market share.

The way this competition can drive down rates is already evident in Oregon. There, one insurer came in with monthly premium costs in the $169 range, while other insurers asked to charge more than $400. But then, seeing  what their competitors were charging, two insurers came back to the state’s regulators and asked if they could refile at lower rates. Otherwise, they wouldn’t be competitive in the exchange. The Obama administration was ecstatic to see this: It’s exactly what they’re hoping will happen across the country.

One thing to keep in mind is that California and Oregon have done a really good job of managing Obamacare. In states like Texas and Florida where officials are doing nothing to help (and often a lot to hurt) in implementing the new law, there will likely be fewer choices and higher premiums.

If that happens, blame won’t belong with the heath care law or the federal officials in charge of its management. It will belong with the state officials who can’t, or won’t, deliver to their constituents the benefits that California’s officials appear to be providing theirs.

That’s it for now– we’ll be back next week covering a slightly more depressing topic (but one that Congress coud easily fix): how the sequester is affecting health care. Have a great long weekend!

Next post: How the sequester is affecting healthcare: Patients turned away from cancer clinics