Warning: Use of undefined constant wp_cumulus_widget - assumed 'wp_cumulus_widget' (this will throw an Error in a future version of PHP) in /home/customer/www/whatifpost.com/public_html/wp-content/plugins/wp-cumulus/wp-cumulus.php on line 375
 Gay marriage is good for public health
≡ Menu 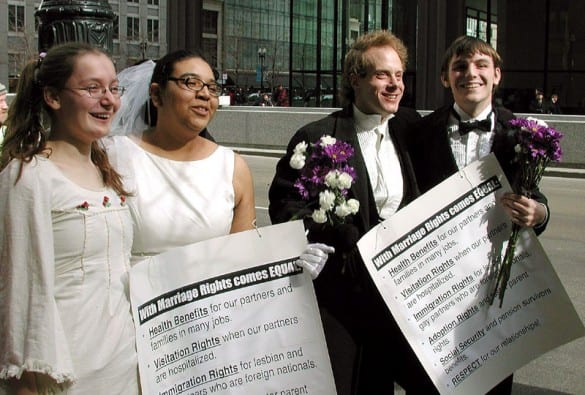 In its DOMA decision last week, the Supreme Court ruled that it’s unconstitutional for the federal government to discriminate against married same-sex couples by defining marriage as only between “one man and one woman.” However, it was silent on whether states can deny same-sex couples the right to marry– in the Proposition 8 case, the justices said simply that after a lower court struck down Prop 8, supporters of the ban lacked the legal standing to bring the case to the Supreme Court.

Gay rights advocates are optimistic that the court will eventually strike down state laws banning gay marriage, and soon. Not only is it an important civil rights issue, but a growing body of research has shown that these bans can have a significant impact on the health of gays, lesbian, and bisexual Americans.

In 2001-2002, and again in 2004-2005, the National Institutes of Health conducted a survey of over 34,000 Americans with detailed questions about their mental health– and coincidentally the second round of the survey was shortly after 14 states had voted to ban gay marriage. In a study published in the American Journal of Public Health, Mark Hatzenbuehler, a professor of sociomedical science at Columbia University, analyzed the data to see how the mental health of gays, lesbians, and bisexuals had changed in those states.

Their study found that “[LGBT] individuals living in the states that banned same-sex marriage experienced a significant increase in psychiatric disorders,” including

Hatzenbuehler conducted another study tracking the health of 1,211 gay men in Massachusetts before and after the state legalized gay marriage. NPR reports:

“Hatzenbuehler found that the men visited doctors less often and had lower health treatment costs after Massachusetts legalized same-sex marriage. When the researchers examined the diagnostic codes doctors were giving the men, they saw a decrease in disorders that have been linked to stress, such as hypertension, depression and adjustment disorders.” [The study focused only on gay men, because not enough women visited the clinics providing data for the study.]

Richard Wight, a researcher at the UCLA School of Public Health published a pair studies looking at the mental health of same-sex couples who got married during the brief window in 2008, when gay marriage was legal in California.

In the first study, Wight used data from a statewide survey of more than 47,000 Californians that attempted to gauge respondents’ psychological distress by asking them how often they’d felt nervous, hopeless, restless or depressed in the past month. His team found:

In a second study, Wight’s team used data from an ongoing study at UCLA tracking the mental health of 202 older gay men, and found that those who were legally married were in better mental health. According to the Los Angeles Times:

“[They] found that men who were legally married to men were more likely than other gay men to have a “positive affect.” That means they were more apt to be “relaxed,” “calm” and “peaceful” and to feel hopeful for the future, among other psychological measures. Gay men in domestic partnerships did not get the same boost, the researchers found.

Likewise, gay men with legal husbands were also less likely to be depressed, according to the study. The same was not true for gay men in domestic partnerships.”

Unmarried same-sex couples are more likely to be uninsured

Another team at UCLA looked at the effect of California’s gay marriage ban on access to insurance. The website Politco reported on the results:

A paper published by UCLA researchers in 2010 that examined “unequal access to health insurance” faced by California’s unmarried same-sex partners found that they were more than twice as likely to be uninsured as married heterosexual couples. And that means a more significant health spending burden on the individuals — and the public — according to the paper, which was published in Health Affairs.

In an interview with Science magazine, Letitia Anne Peplau, a social psychologist at UCLA who testified in the legal challenge to Prop 8, puts it simply:

“Marriage appears to confer a number of benefits, psychological and otherwise. There isn’t anything in the scientific literature that suggests that gay or lesbian people would benefit less or differently than heterosexual people from access to the institution of marriage.”

[For more on the public health implications of gay marriage, this paper provides a good overview.]

Next post: White House delays the employer mandate: here’s what that means