Warning: Use of undefined constant wp_cumulus_widget - assumed 'wp_cumulus_widget' (this will throw an Error in a future version of PHP) in /home/customer/www/whatifpost.com/public_html/wp-content/plugins/wp-cumulus/wp-cumulus.php on line 375
 Fixing Obamacare, Part 1: The employer mandate
≡ Menu 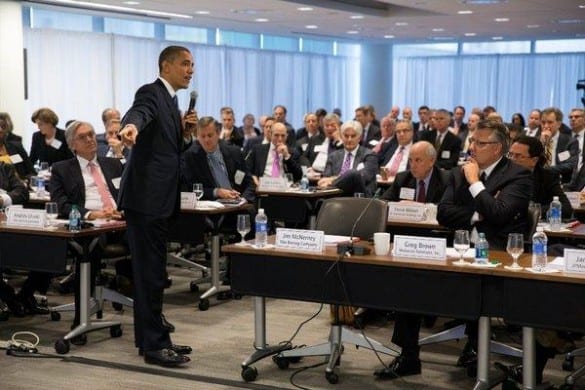 Among psychologists, the term “catastrophizing” is used to describe a thought pattern where someone views an event or situation as worse than it actually is. There are two parts: (1) predicting a negative outcome, and (2) jumping to the conclusion that the negative outcome would be the end of the world.

“Catastrophizing” is the perfect way to describe how the Republicans have approached Obamacare over the past few years. There was seemingly no end to the predicted disasters: young, healthy people wouldn’t sign up, it would explode the federal deficit, insurance costs would skyrocket, it would lead to Medicare “rationing,”… the list goes on.

Of course, none of these predictions have come true– it’s become clear that Obamacare is working (and working particularly well in states that have embraced it). Meanwhile, Republicans have gotten quieter about it. As Bloomberg News reports, Obamacare is losing its punch as a campaign weapon: since April, the number of anti-Obamacare ads has dropped dramatically, while a Democratic senator in a tight race in Arkansas has begun touting its success.

That’s not to say that the law is working perfectly though. Now that there’s less nonsense floating around about how Obamacare is destroying America, we figured it might be a good time to look at some actual problems with the new law, and what Congress could do to fix them.

First up: a provision that Republicans and Democrats agree should probably be scrapped, yet Republicans are suing the president for not implementing it. Welcome to the employer mandate.

There are two possible penalties a large employer could face:

What’s wrong with it?

1. It’s a huge administrative hassle— for both employers and the government (which is why the White House says it was delayed for a year). As Health Affairs Timothy Jost has pointed out:

To make the law work, employers must report to the federal government and to their employees a great deal of information regarding the health benefits they offer and to whom they are offered.  Employers will no doubt spend hundreds of thousands of hours compiling this information and the government thousands more hours processing it.

3. Workers might still be left without adequate coverage. Many large employers have realized they can avoid the penalties by offering “skinny plans”— plans that cover preventive care and little else. Here’s how it works.

To avoid the first penalty we mentioned above, an employer has to offer “minimum essential coverage,” but for large employers, that just means any plan that covers “medical care” and follows a couple other rules, like:

What you might notice is that a plan could cover only preventive care and still meet all those conditions. And that’s exactly what some large employers are doing.

The new plan will have no dollar limits on benefits, but will cover only preventive services, six annual doctors’ visits and generic drugs. X-rays and tests at a local urgent care chain will also be covered. It wouldn’t cover surgeries or hospital stays.

If an employer is only offering bare-bones plans, workers can shop for better coverage on an Obamacare exchange– possibly triggering the other penalty we mentioned above. However, if an employer offers at least one plan that qualifies as “affordable and adequate,” workers can no longer claim subsidies on the exchange, meaning no penalty for the employer. So some companies are planning to offer one plan that’s “affordable and adequate” along with a bunch of skimpier plans.

It’s better than before Obamacare, when employers would offer expensive mini-med plans that barely qualified as insurance, and workers had no other options. Now they do have options, but many health care experts worry that workers will simply sign up for the cheapest plan offered by their employer, without realizing it offers almost no protection if they get sick.

4. Many kids will be left without coverage. Remember that workers can only get subsidized coverage on the Obamacare exchanges if their employer doesn’t offer a decent plan for less than 9.5% of their income. The rule works fine if you’re single, but there’s a problem for those who are married or have kids.

It’s what’s known as the “family glitch.” The IRS ruled that the affordability requirement would be based only on the cost for a single employee– so a family plan might cost way more than 9.5% of a worker’s income, but if the individual plan is less than 9.5%, the worker and the rest of their family can’t get subsidies on an Obamacare exchange.

The Government Accountability Office estimates that this glitch could leave up to 460,000 kids without coverage.

How could the employer mandate be fixed?

Some have proposed smaller fixes to address these issues, but these solutions could cause problems of their own.

For example, Senator Al Franken (D-Minn.) recently introduced a bill that would fix the family glitch by changing the definition of “affordable coverage” so that it applies to family coverage, not just individual coverage.

Another bill has been introduced that would change the definition of full-time employee from 30 to 40 hours a week. This might keep employers from cutting the hours for some employees, but some have argued that it could cause employers to cut back on the hours of those who currently work 40-hour weeks. This fix would also be expensive– the CBO estimates it would cost $74 billion over the next decade.

A better solution might be to simply scrap the employer mandate altogether. The main reason it was included in the ACA in the first place was to prevent employers from simply dumping workers onto the exchanges and leaving the government to foot the bill. However, as Jost has written, they have plenty of other incentives to offer coverage:

A study from the Urban Institute found that without an employer mandate the number of uninsured would only increase by 200,000. (The Congressional Budget Office disagrees however, projecting that between 500,000 and 1 million more people would be left uninsured without the mandate.)

So why doesn’t Congress just get rid of it it? The big stumbling block is money– according to the CBO, the employer mandate is expected to raise $130 billion in revenue over the next decade. The Urban Institute thinks it would be much cheaper– just $46 billion over ten years, but since the CBO is the official scorekeeper, Congress has to use that estimate. Paying for repeal– from some combination of raising taxes (which Republicans hate) or cutting funding to another existing program (which Democrats hate) wouldn’t be easy.

Next post: More good news about Obamacare premiums for next year

Previous post: Has Congress done anything to screw over ALS patients recently?