Warning: Use of undefined constant wp_cumulus_widget - assumed 'wp_cumulus_widget' (this will throw an Error in a future version of PHP) in /home/customer/www/whatifpost.com/public_html/wp-content/plugins/wp-cumulus/wp-cumulus.php on line 375
 Fight of the Navigators
≡ Menu

Fight of the Navigators 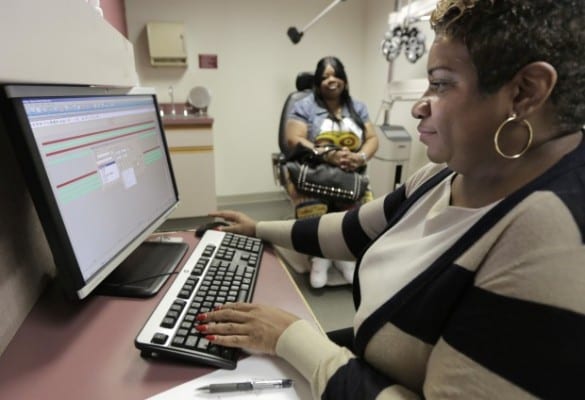 Here’s how getting coverage under Obamacare is supposed to work: you log onto an online marketplace, see if you qualify for subsidies or Medicaid, choose the kind of coverage that works best for you, and purchase it right there. Seems pretty straightforward, and for many people it will be just that easy.

But in order for that process to go smoothly there’s a lot you have know. You have to know that exchanges exist (55% of Americans don’t), where to find your state’s exchange, whether you need to buy coverage there, and when you can enroll. You need to know how to use a computer and navigate a website with a lot of information. You need to know how to estimate your income to see if you qualify for subsidies, what type of plan would be best given your health and income status, what key insurance terms mean, and where to look to see what various plans cover and which providers are in network. You might have questions about what happens if you lose your job, get a new job, move, get married, or have a child, and you’ll need to know where to find answers. Many people don’t have this info and don’t know where to find it.

Luckily Congress realized that some people will need help, and set aside money to hire “navigators” that will (1) educate people about their insurance options under the new law, and (2) guide them through the process of obtaining coverage.

These navigators will be crucial in helping many Americans– particularly low-income Americans– understand the law. That doesn’t sound particularly controversial, so why are Republicans trying to stop them?

Who are the navigators?

The navigator program is modeled on past successful examples, like Medicare’s State Health Insurance Assistance Program (SHIP), and Massachusetts’ Fishing Partnership, which enrolled thousands of hard-to-reach uninsured commercial fisherman in new affordable coverage in the 1990s.

Kaiser Health News explains the kind of help the Obamacare navigators will offer:

Navigators will provide assistance on the phone and in person to help people understand the health law’s new benefits, including evaluating health plans for sale on the marketplaces, also known as exchanges. They have to balance explaining what’s offered without expressly telling people which policy to choose.

Consumers will be directed to them from the healthcare.gov website (home of the federal marketplaces) as well as through national call centers.

Last month, the federal government awarded $67 million to more than 100 groups across the country to hire and train these navigators. Here’s who got the grants:

The organizations are a mix of non-profit groups and government agencies—everybody from the Missouri Alliance of Area Agencies on Aging to the Utah AIDS Foundation. Planned Parenthood chapters in Iowa, Montana, and New Hampshire are among those getting grants. But so are several religious organizations, including the Oak Hill Missionary Baptist Church Ministries in Mississippi. The organizations that got the five largest grants were all in states with high numbers of uninsured people—Texas, Florida, Georgia, Ohio, and Michigan.

These groups are working on a tight timeline: Obamacare enrollment starts October 1, and they received course materials for the 20-hour navigator training only days ago. Most have just recently started posting on job boards.

While these groups are doing everything they can to get navigators ready in time, Republicans are working to slow them down.

Earlier this month, Republicans on the the House Energy and Commerce Committee sent a letter to all the groups that were awarded grants, asking for detailed information on their navigator programs.

Now, some scrutiny of the navigator programs is fair– after all, people will be trusting them with a lot of personal information about income and health. But the information Republicans are asking for goes beyond normal oversight of training and data security. For example, question six from the letter:

Provide all documentation and communications to related to your Navigator grant. This would include, but is not limited to, materials your organization submitted in order to obtain the grant, materials provided to your organization upon obtaining the grant, and communications between your organization and representatives from HHS, CMS, CCIIO [the Center for Consumer Information and Insurance Oversight] or any other federal or state entity. This request also includes, but is not limited to, any documents provided by (or communications with), representatives from HHS, CMS, CCIIO, Enroll America, or any other entity including federal or state governments discussing individuals to target or solicit for enrollment under the PPACA including discussions or documents related to geographic area.

As Timothy Jost, a health law professor at Washington and Lee University, points out, this request could involve hundreds of documents that would take days to compile:

It might have been reasonable to ask them to describe what they do and how they intend to do it. This is a much more intrusive and extensive request. It is also important to note that most of these organizations are doing this on a comparative shoestring, and this is the busiest time in their existence […] even to have to take a day off to respond to this is too much. And the committee knows this. This is not about gathering information. It is about trying to stop a program.

The Obama administration called the letter a “blatant and shameful attempt to intimidate” outreach workers, and responded on their behalf, hoping to ease some of the paperwork burden on the groups.

Obstruction at the State Level

Meanwhile, Republican lawmakers in at least 15 states have passed laws restricting who can be a navigator and the kind of work they can do.

Some states– like Missouri and Ohio– have passed laws that restrict navigators from giving advice about plans and benefits. Other states–  including Georgia, Nevada, and Utah– have said that navigators have to meet certification requirements similar to insurance brokers, even though navigators can’t suggest what plan to buy and won’t make a commission.

States argue that they’re simply trying to protect consumers, but federal law already requires navigators to adhere to strict privacy and security standards. A large part of the navigator training is devoted to safeguarding consumers’ personal info, and there are criminal penalties for violation of privacy and fraud.

Also, as the Center for Public Integrity points out, the language in many of the new state regulations is nearly identical to proposals from lobbyists for insurance brokers, who see the navigators as unwanted competition.

And as this video of Georgia’s Insurance Commissioner makes clear, there’s another motive behind many of these new state laws:

The pressure from Republicans has had some effect. Cincinnati Children’s Hospital Medical Center had to turn back its grant to enroll uninsured people at its hospitals after Ohio passed a law significantly limiting who could participate in the navigator program. West Virginia Parent Training and Information also sent back their grant, which was meant to fund “outreach to people with disabilities, people with limited English proficiency and/or limited literacy, people of low socioeconomic status, and people in rural areas.” The nonprofit didn’t say why it’s dropping out of the program, but according to The Washington Post’s Sarah Kliff:

West Virginia attorney general Patrick Morrissey has been a leading critic of the navigator program. He organized in August a letter signed by 13 attorneys general to Health and Human Services that described the navigator program as a “security disaster waiting to happen.”

Still that’s only two groups out of more than 100, and the grant money they returned will hopefully go to others. Meanwhile the rest of the groups seem to be moving forward, which is good news for the uninsured who will need help on the exchanges.

Next post: Pennsylvania’s governor reverses course on Medicaid… sort of

Previous post: Video: Why are American healthcare costs so high?